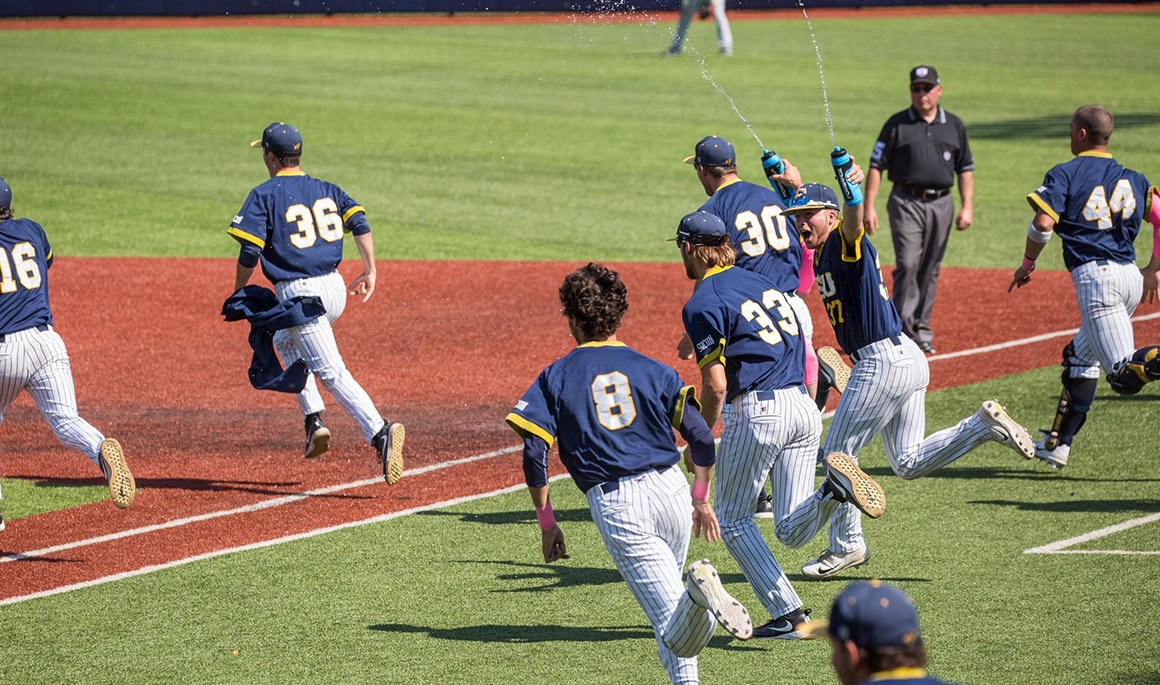 JOHNSON CITY, Tenn. (May 15, 2017) – After posting a 4-1 record in the last five games, the ETSU baseball team will play its final home game of the season on Tuesday, May 16 as the Bucs host UNC Asheville at Thomas Stadium at 6:30 p.m.

First pitch between ETSU and UNC Asheville is scheduled for 6:30 p.m. at Thomas Stadium. Jamin McCann (Kingsport, Tenn.) will get the start for the Blue and Gold, where the Bulldogs have yet to name a starter for Tuesday’s game.

The final home game will be streamed on the Buccaneer Sports Network YouTube page, while live stats will be provided via BucsStats.com. The links for the game can be found to the right of this page.

ETSU enters the final mid-week contest of the year with a 24-26 overall record including an impressive 19-12 home record at Thomas Stadium.

In the Bucs’ last five games, the Blue and Gold are 4-1 with wins over The Citadel and Samford. In that stretch, Hagen Owenby (Knoxville, Tenn.) leads the ETSU squad with a .500 batting average (10-for-20) including two home runs, five RBIs and five runs scored. Chris Cook (Kingsport, Tenn.) and Blake Rowlett (Clarksville, Tenn.) have each connected with six hits with Rowlett dropping three home runs and Cook connecting with a home run and a double. Hunter Parker (Chattanooga, Tenn.) and Jammer Strickland (Knoxville, Tenn.) each tallied a team-leading five RBIs in the five-game stretch.

In the last five games, Blake Smith (Ninety Six, S.C.) has been on a tear as he has made two starts – at The Citadel and versus Samford. The senior has twirled 12.2 innings while striking out 15 batters and walking only a pair. He has allowed four earned runs while toting a 2.84 ERA in his last two starts. Logan Gentry (Kingsport, Tenn.) has appeared in four games in the last five including holding opponents to a .154 batting average. Russell Koesters (Kingsport, Tenn.) has tossed 2.2 innings and has held opponents scoreless, and McCann pitched in four games while striking out six and walking one in six innings of work.

UNC Asheville enters Tuesday’s game with a 21-28 overall record including an 8-16 road record. The Bulldogs are fresh off a series victory at home where they defeated Longwood 4-1 and 7-3 on Friday and Saturday, respectively, while dropping Saturday’s game 7-1 at Greenwood Field.

The Bulldogs have a trio of players batting above .260 on the year with Danny Wilson leading the pack with a .279 mark in 49 starts, and four-year letterman Joe Tietjen is second on the team with a .271 clip in 46 starts this year. Brandon Lankford has the third-best batting average at .261, and he leads the Bulldogs with 14 doubles, seven home runs and 36 RBIs.

Wilson (11) and Tietjen (18) have combined for 29 of the team’s 54 stolen bases, and as a team, UNC Asheville has only been caught stealing 13 times this year. After swiping his 18th stolen base of the season on Friday against Longwood, Tietjen has moved into sole possession of eighth place, all-time, in stolen bases in a single season at UNC Asheville.

Spencer Orr has been one of the best starters for the Bulldogs as he totes a 2-4 record in 12 starts this year. He sports a 3.52 ERA in a team-leading 69 innings pitched and 64 strikeouts. Justin Woods has been one of the shutdown closers for the Bulldogs as he leads the team with five saves in 18 appearances and 18.1 innings. With the five saves, he is tied for 10th all-time in program history in career saves (five) along with current teammate Eric Whitecavage.

As a pitching staff, the Bulldogs have an opponent batting average of .308 where they have allowed 49 home runs and 91 doubles. They have struck out 317 opponents and walked 220 batters in 430 innings this year.