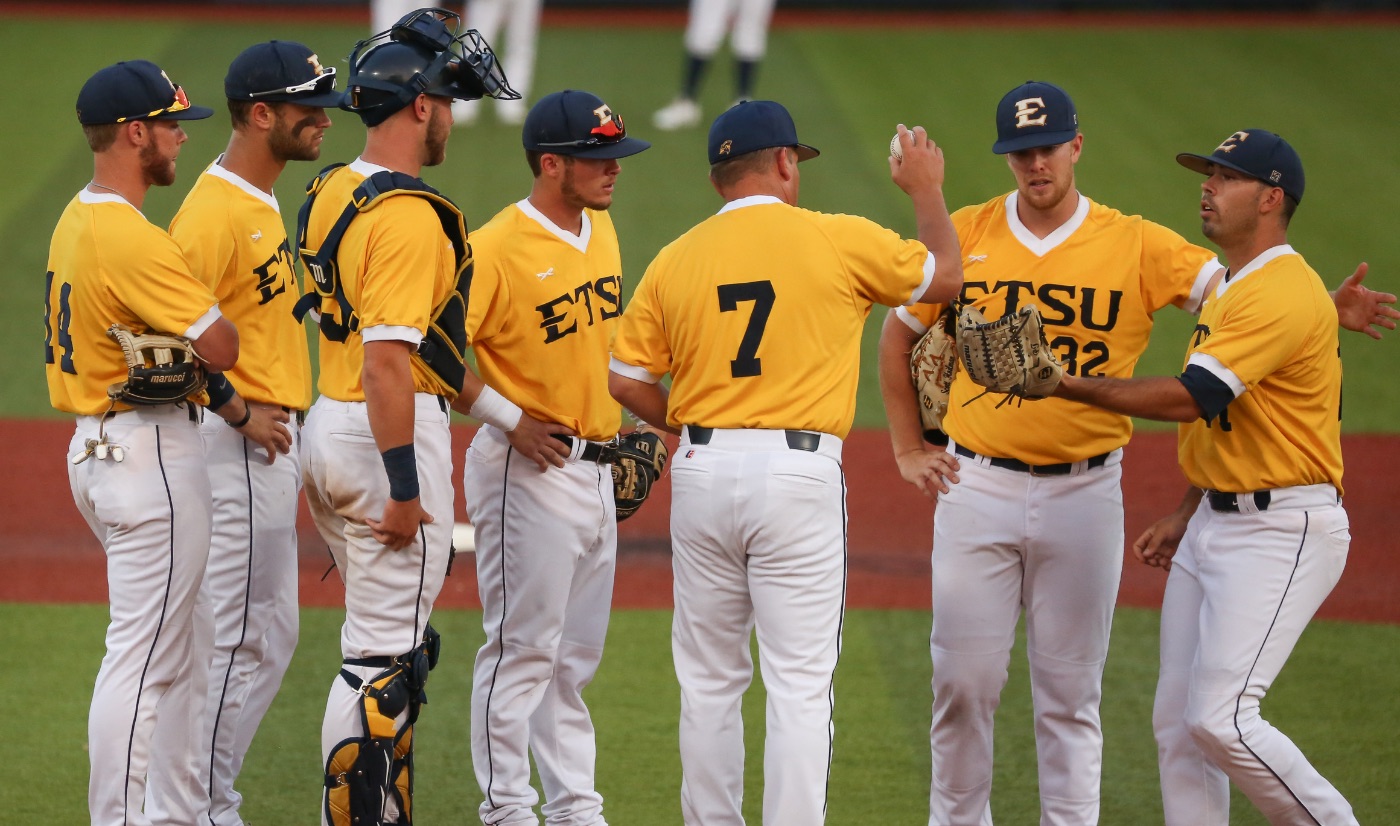 JOHNSON CITY, Tenn. (May 16, 2017) – To conclude its regular season home schedule, the ETSU baseball team was edged by UNC Asheville 6-4 on Tuesday at Thomas Stadium as the Bucs attempted a ninth inning comeback.

Drew Korzysbki (Knoxville, Tenn.) twirled the best outing for the Blue and Gold as he tossed two frames while recording three strikeouts, which all came in the eighth inning. Russell Koesters (Kingsport, Tenn.) posted a good outing as he worked the fifth inning. He allowed a leadoff double, but the red-shirt sophomore struck out the next two batters and forced a groundout to end the inning.

Despite each giving up a pair of hits in their time on the mound, Matt Turner (Knoxville, Tenn.) and Peyton Taylor (Kingsport, Tenn.) held the Bulldogs off the scoreboard.

The Bulldogs jumped out to a 1-0 lead as Jake Madole connected with a RBI single up the middle in the second inning, but in the home half, ETSU took its first lead of the game as Smith scored on a wild pitch and Hoilman hit a frozen rope to left center to score Parker.

UNC Asheville matched ETSU by plating a pair of runs, which came off Brandon Lankford’s single up the middle.

Down 3-2 in the third, the Blue and Gold knotted the game up as Maher started the inning with a single to right field. He stole second base on the next pitch, and with Maher sliding into second, the ball hit the Brentwood, Tenn. native and trickled into left field. With the error, the junior was able to hustle to third base. Owenby took advantage as he grounded out to short, which gave his teammate plenty of time to score.

After being held scoreless in the next two innings, the Bulldogs blew the game open in the sixth as Danny Wilson plated a run off a ground out, and Joe Tietjen smashed a two run home run to left to give his team the 6-3 lead.

ETSU threatened to score runs in the sixth inning as the Bucs put two runners on base with no outs, but the Bulldogs induced an inning-ending double play to end the surge.

Parker tried to rally the Buccaneers in the seventh as he reached base on an infield single to start the inning, but the next three batters were retired in order.

The Bucs tried to start a ninth inning rally as Smith and Jammer Strickland (Knoxville, Tenn.) reached base on a walk and a single, respectively. Following a pitching change, Caleb Longley (Cleveland, Tenn.) delivered a hit into center field to force the bases loaded with one out. Bailey plated one run off a groundout, but Chris Cook (Kingsport, Tenn.) ended the game and rally with a fly out to right field.

ETSU only mustered one two-out hit while UNC Asheville tallied six in the mid-week contest. The Bulldogs also batted .333 (4-for-12) with runners in scoring position, while the Bucs were held to a .133 batting average (2-for-15) with RBI opportunities.

Jesse Juday (1-1) earned the victory as he tossed three innings while striking out a pair, and Daniel Sweeney (Johnson City, Tenn.) was pinned with his first loss of the season as he drops to 1-1. Eric Whitecavage received the victory after holding the Buccaneers scoreless in the ninth inning.

The Bucs will return to the diamond in Lexington, Va. as ETSU squares off with VMI in an important Southern Conference series beginning on May 18 at 6 p.m.