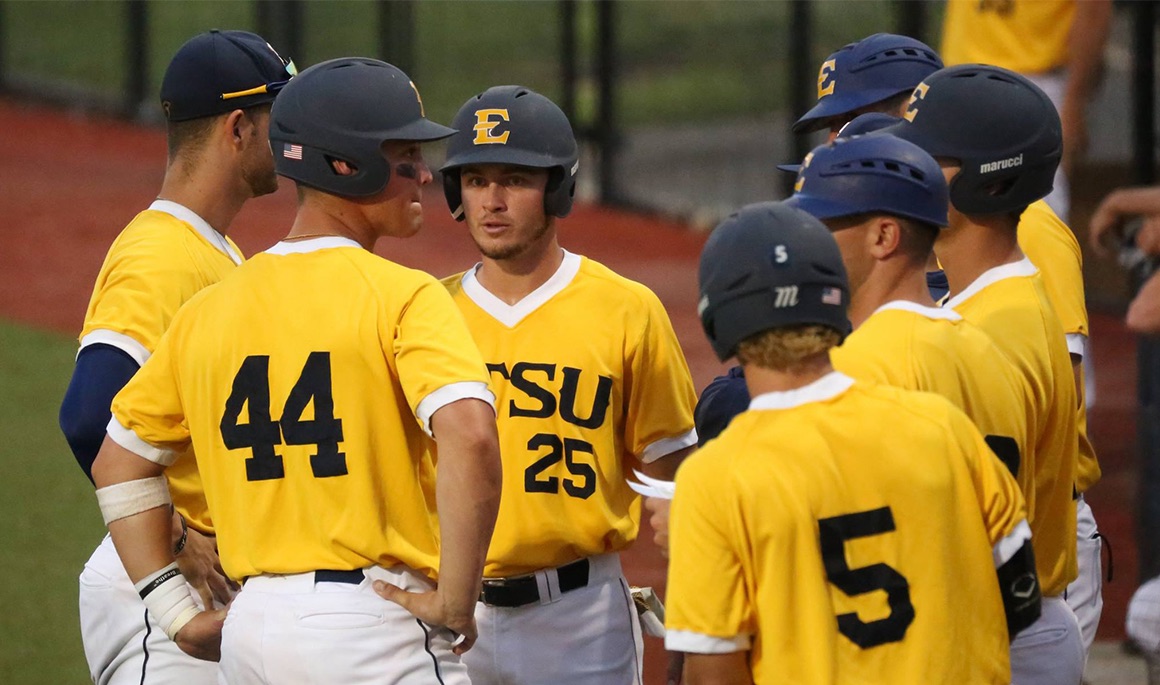 JOHNSON CITY, Tenn. (May 17, 2017) – The ETSU baseball team will travel to Lexington, Va. to square off with VMI for the final three games of the year. The crucial set against the Keydets begins May 18 at 6 p.m. at Gray-Minor Stadium.

All three games at Gray-Minor Stadium will be broadcasted via ESPN3. VMI is also providing live stats for the series, and all the appropriate links can be found to the right of this page.

ETSU enters the season finale with a 24-27 overall record and a 6-16 Southern Conference mark.

In the 21 SoCon games this year, Hagen Owenby (Knoxville, Tenn.) paces the ETSU offense as he leads the team in several offensive categories – batting average (.405), hits (34), home runs (6), total bases (57), slugging percentage (.679), walks (12) and on-base percentage (.490). Hunter Parker (Chattanooga, Tenn.) is second on the ETSU squad with a .316 clip in league games where he has connected with 24 hits, 10 runs scored and 14 RBIs. Christian Bailey (Kingsport, Tenn.) leads the team with six doubles in Southern Conference games including touching home 14 times and posting 26 hits.

Ryan Simpler (Lewes, Del.) continues to pace the ETSU pitching staff as he has started in seven league games where he sports a 2-2 record and a 3.88 ERA. He has twirled 51 innings and has struck out 47 opponents and limits batters to a .275 batting average. Right behind him is senior Blake Smith (Ninety Six, S.C.) who has also started seven league games where he has tossed 42 innings and has struck out 42 batters.

Overall this season, senior Connor Bartow (Jonesborough, Tenn.) leads the ETSU bullpen with a 3.60 ERA in 15 appearances. He has posted one save and has struck out 12 opponents while limiting batters to a .222 average. Logan Gentry (Kingsport, Tenn.) has tossed in 16 games including one start where he totes a 2-1 record and a 4.29 ERA. He has struck out 17 batters in 21 innings of work.

VMI enters its final home stand of the season with a 22-29 overall record and a 7-14 SoCon mark. The Keydets are 13-11 at home, and they have gone 3-3 in their last six home games. VMI is 3-6 in Southern Conference home games this year with wins over UNCG (twice) and Samford.

In 21 league games this year, Tyler Tharp sports a .354 batting average, which leads the team. He has connected with 28 hits including 16 runs scored, three doubles, two triples, nine home runs, 62 total bases, a .785 slugging percentage and a .429 on-base percentage. Jake Higgins is the other Keydet hitting above .300 in league games this year with a .319 batting average. He has totaled 23 hits including four doubles and a pair of home runs.

Josh Winder is VMI’s primary starter as he has started in seven games in the SoCon where he sports a 3-4 record and a 3.75 ERA. He has struck out 53 batters in 50.1 innings of work including posting two complete games. Ryan Bennett is the Keydets’ shut down closer as he has appeared in nine league matches this year and sports a 2-0 record. He leads the team with a pair of saves in league games where he averages just over one strikeout per inning pitched (24 strikeouts: 23.2 innings).

Overall this year, VMI has struck out 537 times in 51 games (10.53 strikeouts per game). The Keydets sport a .258 team batting average including a .434 slugging percentage and a .348 on-base percentage. VMI has swiped 37 bases this year and has been caught stealing 25 times.

As a pitching staff, they average 8.16 strikeouts and 4.24 walks per game. Opponents are hitting .291 against VMI where it has allowed 65 home runs and 98 doubles in 51 games this year. The team has also allowed 6.71 runs per game, but they have totaled 10 saves and four complete games this year.