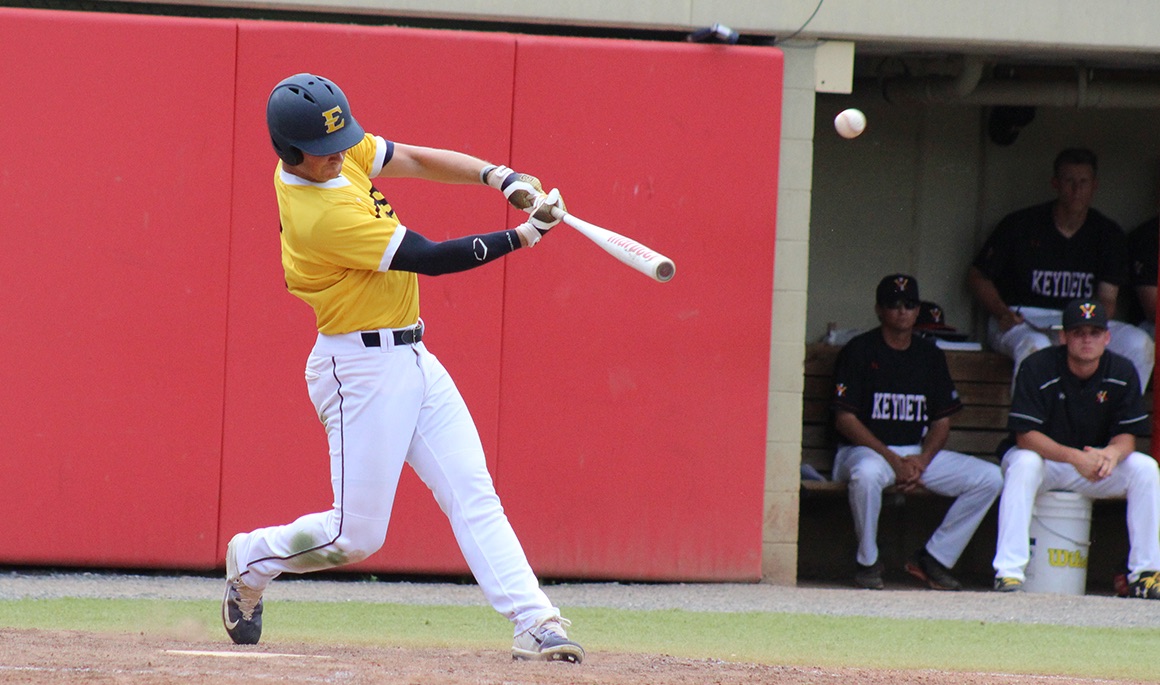 Jammer Strickland connecting with the game-tying solo home run in the seventh to start the five-run rally.
HOW SWEEP IT IS! Five-run seventh inning too much for VMI as the Bucs down Keydets 9-3
ETSU at VMI | May 20, 2017
Related Links

ETSU baseball completed the three-game sweep of VMI on Saturday as the Bucs downed the Keydets 9-3 behind a five-run seventh inning at Gray-Minor Stadium in Lexington, Va.

The Bucs posted their third consecutive game with double-digit hits as the Blue and Gold pounded out 11 hits including six for extra-bases. Jammer Strickland (Knoxville, Tenn.) provided a lot of the spark for ETSU as he dropped two extra-base hits including the game-tying solo homer in the seventh and a leadoff double in the third where he eventually scored ETSU’s first run off Chris Cook’s (Kingsport, Tenn.) double.

Blake Rowlett (Clarksville, Tenn.) also posted a strong offensive day as he posted a pair of singles, which produced a team-leading three RBIs on Saturday. He also concluded his regular season with an eight-game hit streak including a 13-game on-base streak. Hagen Owenby (Knoxville, Tenn.) tallied a pair of hits including a RBI and two runs scored. Cook and Strickland each matched Owenby as the duo each touched home twice.

Brock Beeler (Knoxville, Tenn.) recorded his first collegiate hit in the ninth inning where he outhustled an infield single to first base.

In the VMI series, eight Buccaneers hit above .300 with Hunter Parker (Chattanooga, Tenn.), Cook and Owenby each totaling seven hits including seven combined extra-base knocks. Strickland tallied six hits where he picked up three singles, one double, one triple and a home run. Aaron Maher (Brentwood, Tenn.) finished the series with five hits including a team-leading three doubles.

Griffin Krieg (Nashville, Tenn.) started his 36th career game on Saturday for ETSU where he picked up the quality start by tossing six innings while allowing one earned run and striking out six Keydets. He totaled 90 pitches including 55 for strikes en route to walking one batter and scattering five hits.

Jamin McCann (Kingsport, Tenn.) worked the seventh frame where he surrendered two base knocks, but he registered a strikeout to hold VMI scoreless. Maher made his third appearance this season, and he struck out one in 1.1 innings of scoreless work.

Krieg earned the victory, and the red-shirt senior moves to 2-5 on the season. John Fuqua was pinned with the loss as he falls to 0-1 this year.

With the win, ETSU claimed the No. 7 seed in the Southern Conference Tournament presented by Holston Gases, which begins next week in Greenville, S.C. at Fluor Field.

For the first time in the three-game series, the Bucs were held scoreless in the first inning as ETSU went down in order. The Keydets capitalized on the opportunity as VMI took its first lead of the series with a Tyler Tharp RBI single with two outs in the first.

After a nearly perfect inning for both squads in the second, ETSU knotted the game in the third as Strickland and Cook each posted doubles to make it a 1-1 game. However, VMI quickly answered with two outs in the bottom half as Matt Pita singled up the middle to score Ryan Hatten from third.

The Bucs were held scoreless in the fourth and fifth frames, and VMI jumped on the Bucs as Jacob Jaye crushed a solo homer with two outs to make it a 3-1 game. The Blue and Gold matched quickly in the top of the sixth as they plated a lone run as Rowlett took advantage of Owenby’s double down the right field line as Rowlett connected with a single to center field to make it a 3-2 game.

After Krieg made quick work of the Keydet lineup in the home half of the sixth, the ETSU offense exploded in the seventh by scoring five runs off three hits, two walks and an error.

Strickland started the inning with a statement as he demolished a leadoff homer into the rocks in left field to tie the game at 3-3. Following a groundout, Cook walked and advanced to third base off two wild pitches. Maher drew a four-pitch walk, which forced VMI to make a pitching change. Owenby placed a single in between three Keydet players, which scored Cook to give ETSU its first lead of the game at 4-3.

The Bucs didn’t stop there as they took advantage of a throwing error, which gave the Bucs the bases loaded and one out. Rowlett made it hurt as he blasted a long single off the left field wall. The ringing hit plated two runners and extended the lead to 6-3. After a fly out, VMI gifted ETSU with a wild pitch, which allowed all three Buccaneers on the base paths to advance 90 feet. Strickland ended the inning with a strikeout, but the Bucs took a 7-3 lead into the seventh inning stretch.

McCann was the first reliever for the Bucs, and he held the Keydets off the scoreboard in the seventh despite giving up a single and a double. He forced Michael Diodato and Jaye to strikeout and ground out with a pair of runners in scoring positions and one out.

ETSU padded its lead with a Maher double to right field in the eighth inning, and a Parker double down the right field line in the ninth to make it a 9-3 lead.

VMI started a comeback as Collin Fleischer started the bottom with a single. Following a groundout to first, the game was suspended and eventually called after a 40-minute delay due to lightning in the area.