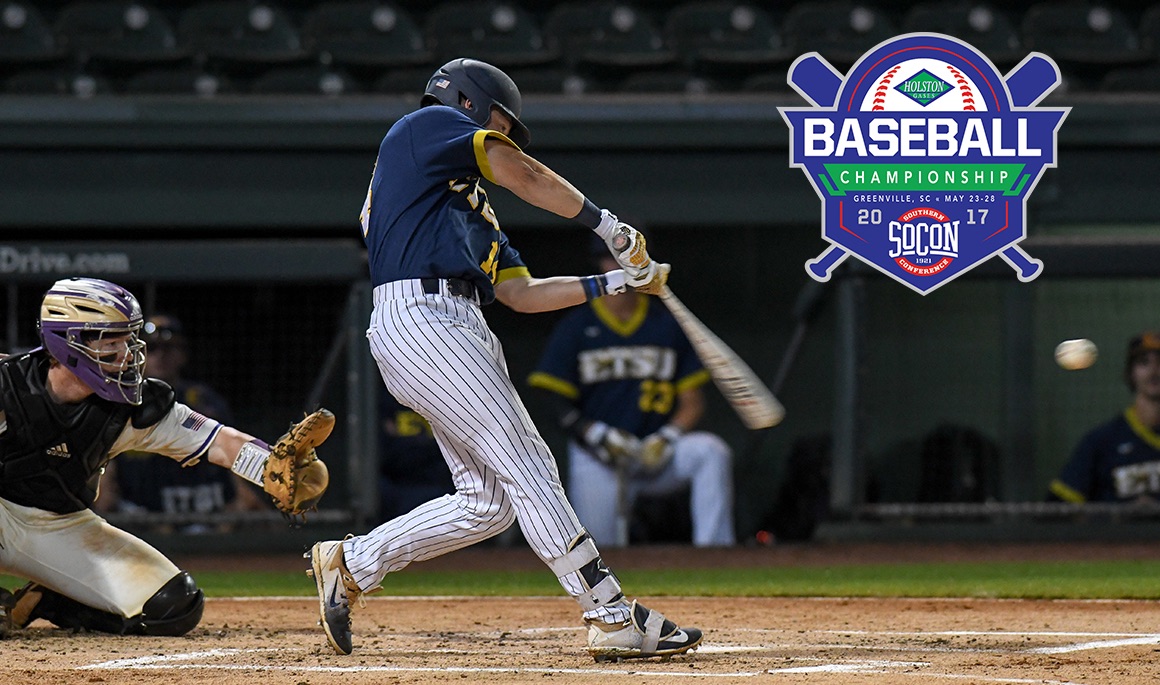 Cullen Smith (pictured) connected with the game-winning two RBI triple in the ninth to give ETSU the 8-6 victory in the first round of the Southern Conference Tournament in Greenville, S.C.
No. 7 ETSU completes comeback victory versus No. 2 Western Carolina, 8-6
ETSU at Western Carolina | May 24, 2017
Related Links

GREENVILLE, S.C. (May 24, 2017) – Down to two outs in the game, the ETSU baseball team pulled out the improbable comeback victory as the Bucs plated five runs in the ninth inning to end the game by scoring seven unanswered runs to upset No. 2 Western Carolina 8-6 in the Southern Conference Tournament presented by Holston Gases at Fluor Field in Greenville, S.C.

Aaron Maher (Brentwood, Tenn.) and Christian Bailey (Kingsport, Tenn.) connected with clutch run-scoring doubles in the ninth inning to mount the comeback. With the game tied and two outs, Cullen Smith (Lebanon, Tenn.) crushed a two RBI triple to center to give ETSU the 8-6 advantage in the ninth frame.

The Bucs struck for seven unanswered runs from the seventh to the end of the game to secure the upset win in the first round of the SoCon Tournament.

Cullen Smith played hero for the Bucs as he went 4-for-6 with the two go-ahead runs late in the game. He was only a home run shy of the cycle, which would have been the first time for the Bucs since Bo Reeder accomplished that feat in 2009 against Campbell.

Jammer Strickland (Knoxville, Tenn.), Hunter Parker (Chattanooga, Tenn.) and Maher each struck for a pair of hits with all recording at least one RBI. Maher pulled the game within a run with his two RBI double in the ninth where he drove the ball to the left center field wall. Ethan Rice (Unicoi, Tenn.) ended the four-inning scoring drought for ETSU as he struck a RBI double off the left field wall in the seventh inning.

Seven of the nine ETSU starters recorded a hit while seven Buccaneer starters also touched home at least once.

Blake Smith (Ninety Six, S.C.) started game for the Blue and Gold as he twirled three scoreless innings while striking out a pair of Catamounts. Griffin Krieg (Nashville, Tenn.) was pinned for five of the six runs, but all of the runs were unearned due to a fielding error in the frame. Logan Gentry (Kingsport, Tenn.) tossed 2.1 innings where he struck out two batters while allowing one run.

Connor Bartow (Jonesborough, Tenn.) received the win as he posted back-to-back perfect innings including two strikeouts. Maher closed out the ninth inning without allowing a run or a hit in one inning of work.

Bartow moves to 2-1 on the year, and Maher earned his first save of his career. Korey Anderson was pinned with the loss as he falls to 0-2 this season.

The Bucs will play the winner of No. 3 UNCG/ No. 6 Samford on Friday, May 26 at 4 p.m. at Fluor Field as they continue playing in the winner’s bracket.

Chris Cook (Kingsport, Tenn.) started the game off quickly for ETSU as he connected with his team-leading 19th double of the season. His gap-splitting double to right-center gave ETSU early hope. However, Western Carolina’s starter Bryan Sammons struck out the side to leave the red-shirt junior at second and held the Bucs scoreless.

The Bucs took their first lead of the game with two outs in the second frame as Caleb Longley (Cleveland, Tenn.) started the rally with a five-pitch walk. After advancing to second on a wild pitch, Strickland crushed a double to deep left-center field to score his teammate without a throw.

ETSU’s starting pitcher Blake Smith was cruising through his scripted start as he went 1-2-3 in the first two innings. He started to struggle in the third with two outs as he allowed a single to right center and a walk, but he stopped the bleeding by holding the Catamounts scoreless.

The Bucs threatened to extend their lead as Cullen Smith started the fourth inning with a single through the left side. One batter latter, Strickland poked his second hit of the night to put runners at the corners and one out. Parker laid down a safety bunt, but the Catamount pitcher tossed the ball home, and Cullen Smith was called out at the plate. The Catamounts forced Cook to groundout, which ended the inning for the Blue and Gold.

Western Carolina took advantage of holding ETSU off the scoreboard in the fourth as the Catamounts jumped on the first ETSU pitching change as they struck for five unearned runs off five hits and one error. The ETSU error proved costly in the inning as the Catamounts scored all five runs after the error ensued.

The Catamounts jumped on an opportunity in the sixth as Andrew Robinson singled to left field to score Matthew Koeshler with the bases loaded to make it a 6-1 lead. Logan Gentry (Kingsport, Tenn.) limited the bleeding as he forced a pop out and a groundout to end the frame.

The ETSU offense finally started to break through in the seventh as Rice crushed a two-out, pinch-hit double off the “Green Monster” in left field to score Cullen Smith after his single through his right side. Strickland followed with a walk, and Parker connected with a single through the right side, which scored Rice to make it a 6-2 game. Continuing to put the ball in play with two outs, Cook smoked a grounder to second base, and the Catamount second baseman booted the ball to allow a second Buccaneer to score in the inning.

Bartow came in to pitch the seventh and eighth innings for the Blue and Gold, and the senior posted back-to-back outings including a pair of strikeouts.

ETSU made an improbable comeback in the ninth inning as the Bucs struck for five runs off three hits – all of which were extra-bases.

Strickland started the inning with a hit by pitch, but Parker replaced him at first base on a fielder’s choice. Cook was able to draw a four-pitch walk, and Maher split the left-center field gap to make it a one-run game. The Catamounts intentionally walked Owenby, and Bailey made Western Carolina pay as he split the right-center field gap to knot the game at 6-6. After a pitching change, Rowlett popped out to short with the infield in, and Cullen Smith crushed the soon-to-be game-winning two RBI triple to center field as the Bucs went up 8-6 late in the game.

The Catamounts tried to mount a comeback by walking one and getting hit by a pitch to put two runners on with one out. However, Maher shut down the game with a 4-6-3 double play and secured his first save of his career.