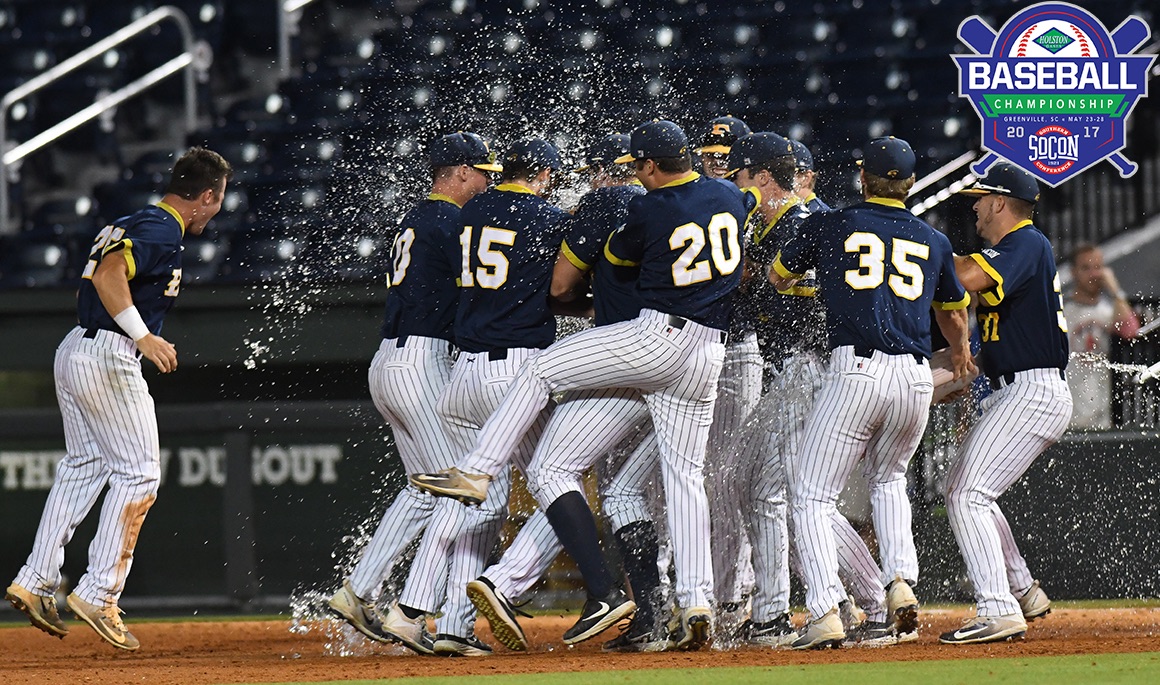 For the second time in the Southern Conference Tournament presented by Holston Gases, the ETSU baseball team used some late-inning heroics as the Buccaneers scored three runs in the bottom of ninth - capped off by Aaron Maher's (Brentwood, Tenn.) walk-off single - to rally past VMI, 12-11, in an elimination game on Friday night at Fluor Field in Greenville, S.C.

ETSU - who scored five runs in the top of the ninth inning to rally past reigning tournament champion Western Carolina early Thursday morning - moves on to face No. 6 Samford in another elimination game Saturday afternoon at 3:30 p.m.

Despite surrendering a pair of leads Friday night to the Keydets, the Blue and Gold continued to fight back, and the ninth-inning rally started when Jammer Strickland (Knoxville, Tenn.) reached on an error to lead off the frame. Strickland later scored on Hunter Parker's (Chattanooga, Tenn.) RBI double to left, while Chris Cook (Kingsport, Tenn.) drove in the tying run on a double to right-center. With one out and the winning run on second, Maher provided the final punch when he sent an 0-1 pitch into right field for the walk-off hit, which sent the Buccaneer faithful into celebration.

The Bucs led 2-0 and 9-6, but VMI rallied to take a 6-2 lead in the fourth and regained an 11-9 lead after plating four runs in the seventh and one more in the eighth. However, Russell Koesters (Kingsport, Tenn.) got out of a jam in the eighth as he left a pair of Keydets stranded at second and third, while Dillon Cate (Sevierville, Tenn.) worked a scoreless ninth to earn his first win of the season. In total, ETSU sent seven pitchers to the bump on Friday night.

Overall, the two teams combined for 23 runs on 35 hits, while leaving 19 runners stranded. ETSU registered 19 hits - seven for extra-bases - as seven Buccaneer starters posted a multi-hit game. Maher led the group with four hits in the win. Meanwhile, eight different players scored a run and seven players drove in at least one run.

Christian Bailey (Kingsport, Tenn.) and Blake Rowlett (Clarksville, Tenn.) hit back-to-back home runs to give the Bucs a 7-6 lead in the fifth, while Hagen Owenby (Knoxville, Tenn.) belted a two-run shot an inning later to make it 9-6. The Buccaneer trio combined to go 7-for-14 with a triple, three home runs, five runs and five RBIs. Rowlett totaled three hits, and Bailey and Owenby finished with two each. Owenby recorded his first triple of his career in the fifth and trotted home on Bailey's homer to left.

Rowlett and Cullen Smith (Lebanon, Tenn.) each tallied a trio of hits. Owenby, Bailey and Parker each recorded two RBIs while Cook, Owenby, Rowlett and Strickland all touched home twice in the 12-run game. As a team, ETSU only struck out once, which ties a season-low for the Blue and Gold.

As a pitching staff, the Bucs struck out eight batters, which extends the all-time team single season record to 446 strikeouts.

The Bucs have now won seven of their last nine - including seven straight games over VMI dating back to 2015 - en route to improving to 29-28. The Keydets - who eliminated The Citadel and Wofford in the tournament - had their season come to an end with a 24-34 record.