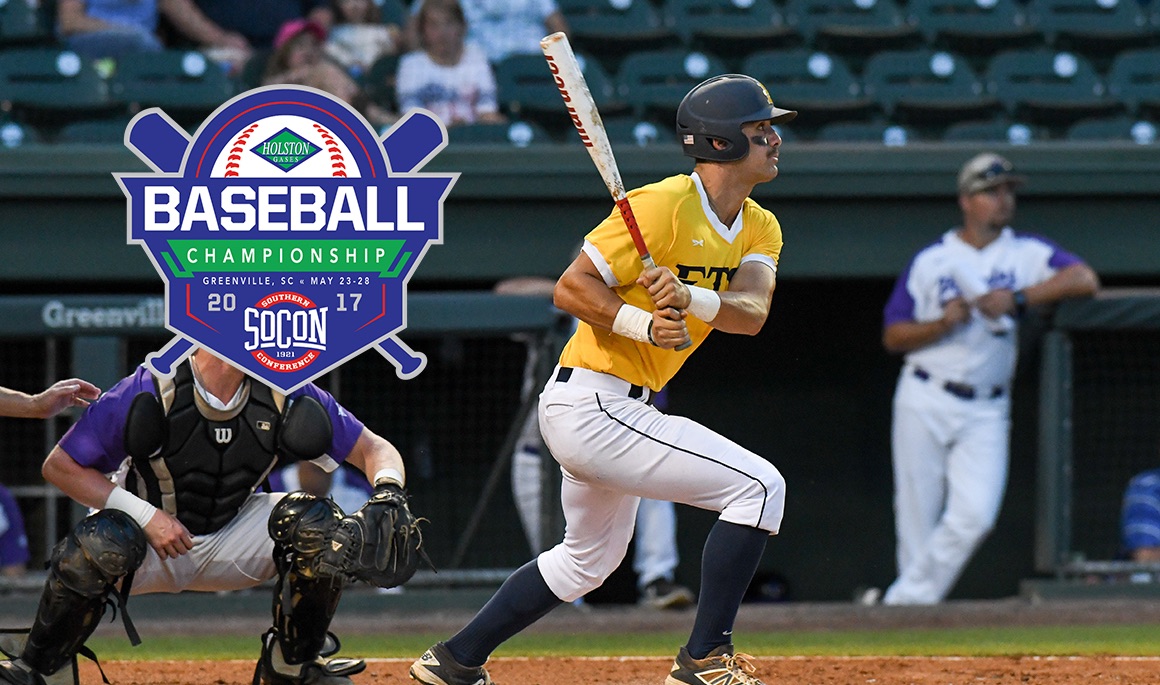 GREENVILLE, S.C. (May 27, 2017) – The Bucs were able to beat Samford 16-6 earlier on Saturday, but ETSU was eliminated from the Southern Conference Tournament later that night as Furman upended the Blue and Gold 8-6 in a fantastic battle at Fluor Field in Greenville, S.C.

ETSU scored in six of the eight innings including nine combined runs in the third and fourth innings. Seven of the nine starters for ETSU recorded at least one hit where four posted multi-hit performances.

As a team, ETSU drew 13 walks, which matched a Southern Conference Tournament record that was set in 1986 when ETSU walked 13 times against Appalachian State.

Chris Cook (Kingsport, Tenn.) set the tone for the ETSU offense as the red-shirt junior went 3-for-4 with five RBIs and two runs scored off a pair of singles and a three-run homer in the third inning. Jammer Strickland (Knoxville, Tenn.) also posted a strong offensive performance as the senior went 2-for-3 with three RBIs and a team-leading four runs scored. Aaron Maher (Brentwood, Tenn.) joined in with three RBIs as he connected with his fifth homer of the year in the sixth inning.

The Buccaneer pitching staff struck out nine batters, which brings the all-time single season record to 455 strikeouts this season. Blake Smith (Ninety Six, S.C.) and Peyton Taylor (Kingsport, Tenn.) combined for seven of those strikeouts with Smith recording all three in the first inning. Taylor recorded four strikeouts, which matches a career high for the red-shirt senior that he set in 2013 at The Citadel.

ETSU is currently playing No. 4 Furman in an elimination game and a slot in the Southern Conference Championship with No. 3 UNCG at noon on Sunday, May 28.

Cook, Maher and Hagen Owenby (Knoxville, Tenn.) each slapped two hits each while Maher recorded a pair of RBI doubles including two runs scored. Owenby totaled a RBI double of his own, and Strickland joined the 1-2-3 hitters in the ETSU lineup as he connected with two singles and a RBI. Ethan Rice (Unicoi, Tenn.) also scored twice in the nightcap on Saturday.

Russell Koesters (Kingsport, Tenn.) made his first start of the season and the second of his career. He posted a strong outing in the elimination game as he worked five innings while scattering four hits and striking out four Paladins.

The Bucs were able to break the deadlock in the second inning as Cullen Smith (Lebanon, Tenn.) started the rally with a double to left center. Strickland followed with a single to right field to put runners at the corners. On the following batter, Strickland caught the attention of the Furman pitcher, and the senior got caught in a run down, which allowed Cullen Smith to score without throw and put ETSU up 1-0.

Furman answered in the third inning as Brett Huebner doubled down the right field line to start the inning. After a groundout to first, Sky Overton grounded out to short to knot the game at 1-1.

After both teams were held scoreless in the fourth, the Bucs struck for a pair of runs to take a 3-1 lead on Furman. Rice started the frame with a single through the right side. Following a sacrifice bunt and a strikeout, Maher stroked a double down the right field line to score his teammate. Owenby crushed a liner right at the Furman third baseman, but the ball got away from the Paladin, which allowed Maher to score without a throw and gave ETSU the 3-1 lead.

Furman cut into that lead as Overton scratched a RBI single through the left side to make it a 3-2 game. In the next inning, Sims Griffith tied the game at 3-3 with a RBI groundout to second.

The Buccaneer offense took advantage of two errors in the top of the seventh as they started the inning with back-to-back errors that allowed Rice and Parker to reach base. Following a double play, Maher stroked a RBI double to right field to make it 4-3, and Owenby traded places with his teammate to extend the lead to 5-3.

However, the Paladins struck for four runs in the home-half of the inning as the team tallied three hits, a walk and a hit by pitch. Jabari Richards poked a two RBI single up the middle with no outs. He later scored on a wild pitch, and Cameron Whitehead doubled off the Green Monster to cap off the four-run inning to make it 7-5.

ETSU made it a one-run game in the eighth inning as Blake Rowlett (Clarksville, Tenn.) crushed a double to the deepest part of Fluor Field. Strickland plated Rowlett with a bloop hit into right center to make it a 7-6 deficit, but Richards gave the Paladins a two-run cushion in the bottom of the eighth as he smacked a RBI single to center to make it a 8-6 game.

With three outs left in the game, Cook tried to start a comeback as he singled up the middle on the ninth pitch of the at-bat. Maher followed with a line out to left field, and Owenby jumped on the first pitch of the at-bat to make it quickly two outs for the Blue and Gold. Down to the last out, Bailey battled by fouling off several pitches, but, eventually, he went down swinging, which sealed the 8-6 victory for Furman and a spot in the SoCon Championship against UNCG on Sunday afternoon.