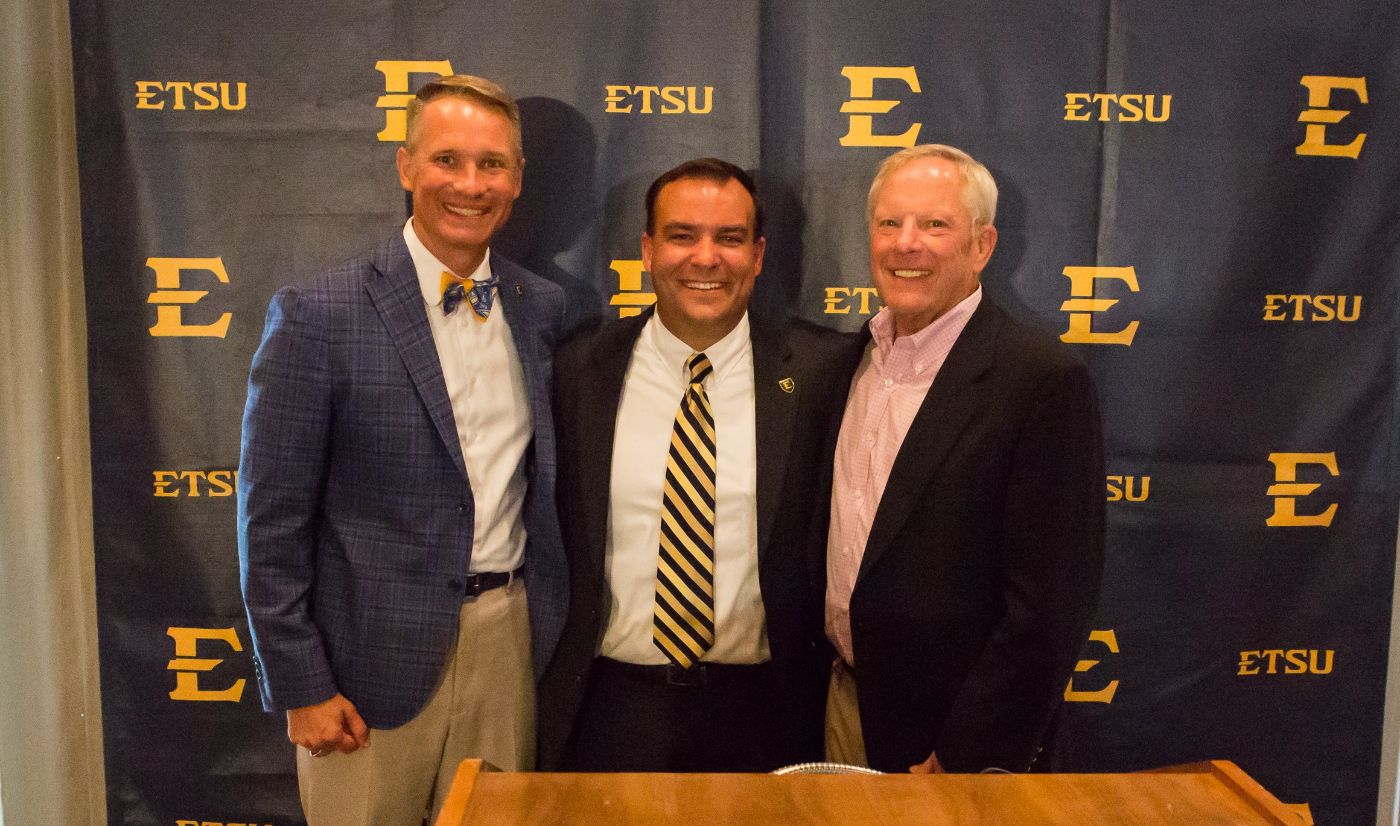 Carter will replace Dr. Richard Sander, who will end a successful four-year tenure as the program’s director of intercollegiate athletics, but will remain at the university as executive director of the Global Sport Leadership doctoral program within the School of Graduate Studies.

“During his time at ETSU, Scott Carter has provided critical leadership in guiding the return of football to campus as well as sustaining and building our other athletics programs,” Noland said. “I have no doubt he will continue to raise the bar for ETSU athletics as he assumes this new role.”

Carter, who played fullback and was a team captain for the ETSU football team from 1998 to 2002, earned both his bachelor’s and master’s degrees from ETSU. He went on to spend 10 years working in the athletic development offices at the University of Tennessee before returning to the Bucs’ program in the winter of 2014. Since that time, Carter has had responsibilities for the operation of the athletic department while also helping lead many critically important initiatives such as the rebirth of the football program in 2015, the construction of the new on-campus football stadium in 2017, and directing multiple corporate and philanthropic fundraising efforts for the overall athletic department.

Carter, whose wife Kristen was also student-athlete and graduated from ETSU, said the opportunity to lead the Bucs’ athletic program is a dream come true for his entire family, which includes daughters Kate (10) and Mia (9).

“I’m blessed to work with leaders like Dr. Noland and Dr. Sander, and it’s an honor to have this opportunity to lead the athletic department at my alma mater,” said Carter, who is a summa cum laude graduate of ETSU. “It is humbling to go to work every day to improve the lives of our student-athletes. Championship-level success both academically and athletically will continue to be our focus each day. This athletic program belongs to the students, alumni and people of this region. The Bucs are your team and it is a privilege to have the opportunity to make you proud.”

Meanwhile, Sander will wrap up a tenure with the athletic department that was highlighted by a multitude of successes, including a partnership with the City of Johnson City to renovate Freedom Hall into the new home of ETSU men’s basketball, record fundraising and ticket sales, and the hiring of successful head coaches such as Steve Forbes in men’s basketball, Bo Oshoniyi in men’s soccer, and Brittney Ezell in women’s basketball.

Along with multiple team championships, trips to NCAA competition, and being named the top men’s program in the Southern Conference in both 2016 and 2017, the Bucs’ remain a strong academic program with high graduation rates, as well as a 100 percent participation rate for community service efforts.

Sander released the following statement regarding his time at ETSU and the transition:

“This is clearly a bittersweet day for me. I have been extremely fortunate to have been given the opportunity to not only lead but also plot the course for ETSU Athletics. Having the opportunity to work with President Brian Noland and develop a relationship where we both trust each other implicitly, is a rare occurrence in Division I. What makes our relationship even more unique is that we both enjoy working with each other and have worked together for the good of ETSU and the entire Northeast Tennessee community.

Over the last four and a half years, there has been a significant amount of change in ETSU Athletics. I am extremely proud of what we have been able to accomplish. First of all, we have built a culture that should serve the department and the University for years to come. The mantra of “Excellence Every Day” is much more than a slogan, it is a way of life in our department. Culture is about having people buy in and commit and our staff and coaches have not only bought in, but emphasized this concept to student athletes. The reason we have success is we have great coaches who recruit quality student athletes and then coach them up. To be successful in our culture, everyone must have great passion for the vision and be willing to commit. Our coaches, student athletes, administrators, alums and fans have done that.

I am proud of many things; starting football, hiring great coaches (Carl Torbush, Brittney Ezell, Bo Oshoniyi, Steve Forbes, Martin Stiegwardt, Joe Pennucci), creating new images and logos while building a brand, winning conference championships (eight SoCon championships in 2016-17), taking my concept for a football stadium and creating the vision and being within days of finishing a beautiful venue, developing a strategic plan, moving to Freedom Hall, hiring talented administrative staff and building an effective team that gets results, developing a great rapport with city officials, creating excitement for ETSU within the community, but most of all seeing our student athletes have success on the field and in the classroom and having a positive influence on their lives.

Without question, we have assembled a talented leadership team that has been a huge part of our success. Moving forward under Scott’s leadership, I have no doubt that the success we have experienced will continue to grow and thrive. After working with Scott Carter for three years, I have no doubt he will do a great job. I am excited about the future and will always be there to help in any way I can.

I am extremely blessed and totally understand how ETSU, my wonderful coaches and staff, our great student athletes and so many people in the region have so positively affected my life. In January of 2013 when Dr. Noland asked me to come to Johnson City for what I thought might be a month, I never thought I would be part of what we have built over the last four and a half years. More importantly, I never thought I would be so fortunate to have met so many people who have had an impact on my life. Brian Noland, thank you for empowering me to build a winning culture throughout the department, supporting me in my strategic decisions and trusting me to be the steward of your vision for ETSU Athletics. GO BUCS!!!”

For more on ETSU’s Department of Intercollegiate Athletics, visit ETSUBucs.com.