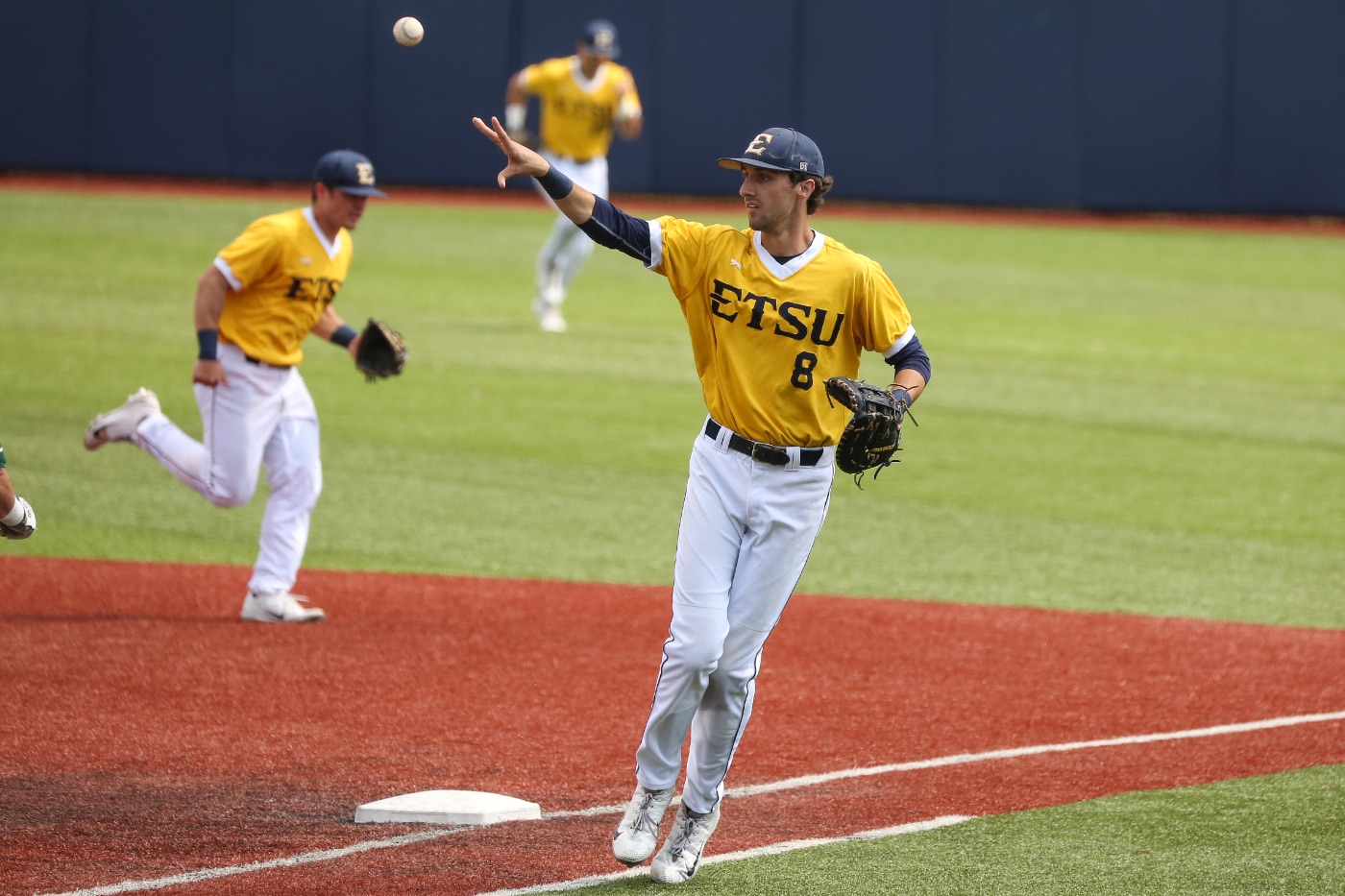 The four-game slate includes a double-header Saturday, Feb. 17 with scheduled times of 12 p.m. and 2:30 p.m. and the series finale Sunday, Feb. 18 at 1 p.m. All times are subject to change due to weather restrictions.

A SoCon Digital Network video stream will be available for the opening game, as Mike Gallagher will serve as the play-by-play announcer. Furthermore, all four games will have live stats available. A link to game one is on the right of the page. All other links can be found with its scheduled game here.

For the first time since 2000, ETSU will have a new skipper in its dugout. First year head coach Joe Pennucci will guide the ship in 2018 after spending nearly two decades as an assistant, including 12 seasons as the assistant head coach at Stony Brook where he helped coach the Seawolves to the 2012 College World Series.

The new look ETSU squad will have some familiar faces, as the senior duo of shortstop Chris Cook (Kingsport, Tenn.) and right fielder Aaron Maher (Brentwood, Tenn.) return for their final seasons. Both were drafted in 2016, but opted to stay with the Blue and Gold.

The Bucs return eight more seniors to this year’s squad, including five who were regulars in last year’s starting lineup and played in at least 53 games last season.

ETSU's pitching staff returns five key arms, including last year’s ace Ryan Simpler (Lewes, Del.). The senior earned second team preseason honors from the SoCon, finishing last year with a 6-4 record and a 3.99 ERA. He also finished with 96 strikeouts, the fourth most in a single season in school history.

ETSU's 2018 roster has 20 lettermen and 12 newcomers. Four pitching transfers and eight underclassmen at various positions headline this season’s incoming class. Many of the newcomers will compete for immediate playing time this season.

NKU is picked fourth in the Horizon League's 2018 pre-season poll, behind Wright State, Illinois-Chicago and Milwaukee.

Below is a breakdown of the Bucs by infield, outfield, catcher and pitcher…

Two former Dobyns-Bennett High School standouts will anchor down full time spots in the infield, as Chris Cook will hold down shortstop for the second straight season. Fellow senior Christian Bailey (Kingsport, Tenn.), who started 58 of ETSU’s 59 games last season, will likely start at first base.

Also returning to the ETSU lineup is sophomore Cullen Smith (Lebanon, Tenn.), who started every game at the hot corner his freshman year en route to a SoCon all-freshman team selection last season.

With the graduation of Blake Rowlett, the Bucs have a hole to fill at second base. Last season, Rowlett started all but one game at second, with the other start going to sophomore returnee Cade Gilbert (Ringgold, Ga.).

Along with Gilbert, senior Ethan Rice (Erwin, Tenn.) will also compete for a starting role in the middle infield, while freshmen Sean Kearney (Powell, Tenn.) and Brandon Parrott (Seymour, Tenn.) will each look to see time in the corner positions.

Splitting time between left and center last season, senior Hunter Parker (Chattanooga, Tenn.) returns for his final season. Parker started all 59 games, 37 of which were manning the middle. Parker is the projected starter in center field this season.

Maher started all 59 games in right field last season and is expected to do so again in 2018. Left field is up for grabs, as senior Caleb Longley (Cleveland, Tenn.) and sophomore Sam Stewart (Kingsport, Tenn.) each started at least one game in left last season. Longley started 44 games as the designated hitter and four in left field.

With the loss of catcher Hagen Owenby (Knoxville, Tenn.), who was drafted in the 12th round to the Atlanta Braves last season, the Bucs will look to reload behind the dish with a familiar face and a newcomer.

Fellow Knoxville native Jackson Greer hopes to step into the starting role as a sophomore. Greer had eight starts behind the plate and saw action in 16 games last year. Behind Greer is freshman Ben Jackson (Guyton, Ga.), who could possibly split time with Greer this season.

The Bucs will have a number of new faces in the starting rotation and the bullpen heading into 2017, as three starting pitchers from last year’s four-man group graduated. Returning from the bunch, as previously mentioned, is senior ace Ryan Simpler.

Simpler’s six wins and 3.99 ERA were the best numbers among starters last season, while his 90.1 innings pitched were second on the team. He also led the team with his 96 punchouts in 2017.

Korzybski, who hopes to earn a starting role this season, had six of the eight starts, while Koesters and Gentry each had one start with at least 20 appearances out of the pen.

Two junior transfers will also look to provide arms in the starting rotation, as the Floridian duo of Micah Kaczor (Tampa, Fla.) and Dominick Stefanacci (Fort Meyers, Fla.) each come to Johnson City by way of St. Petersburg College. Stefanacci held a 2.99 ERA in 12 starts, while Kaczor threw a 3.06 ERA in 67.2 innings.

While mostly known for their bats, seniors Chris Cook and Aaron Maher could each see time on the mound in relief, when needed. Cook tied for a team-high three saves last season, while Maher kept batters in check with a 1.23 ERA through 7.1 innings.