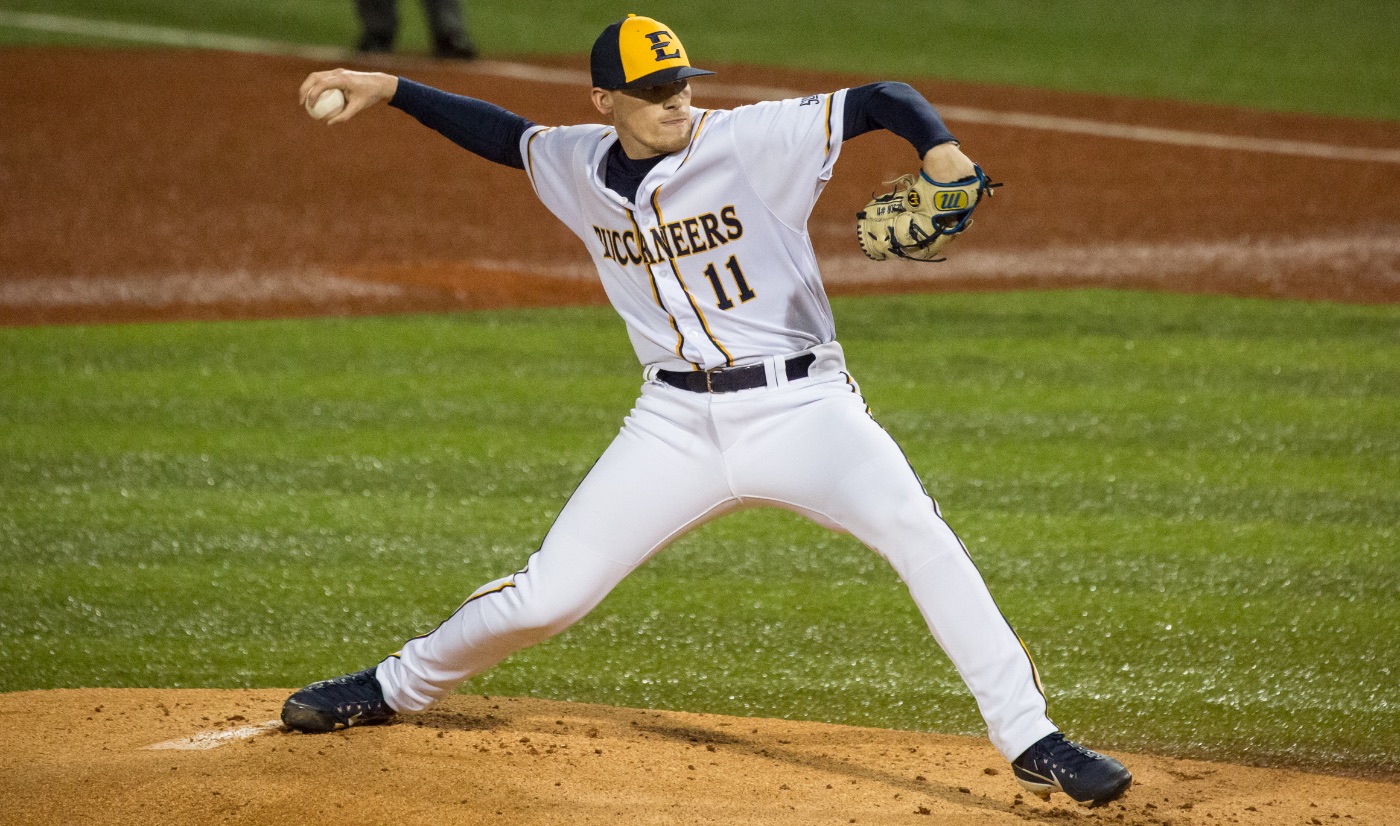 The win marked new ETSU head coach Joe Pennucci’s first career victory as a head coach, as well as his first victory at the helm for Buccaneer Baseball. The new skipper had help from a seasoned offense and two transfer pitchers in the win.

“It’s exciting (to win our first game),” said Pennucci. “They guys played well with good energy. We pitched well and we scored first, and when you do that you typically win some games. I’m really happy for these guys. They’ve worked hard heading into this season.”

Junior transfer Micah Kaczor (Tampa, Fla.) took the mound as the opening day starter. The newcomer started strong, retiring his first 10 batters before surrendering the first of two hits on the day. Kazcor went 6.0 innings, earning 12 strikeouts and allowing one run with no walks to earn his first win with the Bucs.

The 12 punch-outs fell just three shy of the single-game school record of 15 set by Reid Casey in 2001.

“The big thing we wanted to do today was to go out and show we can pitch,” Kaczor said. “I know this team’s history has been hitting, and our staff kind of took that personal. It’s our mission to put that aside and compete every game.”

Fellow junior transfer James Giambalvo (Alhambra, Calif.) closed things out for the Bucs, earning the three-inning save with one run allowed on three hits. Kaczor and Giambalvo combined for 16 strikeouts and zero walks in an impressive first outing.

Offensively, ETSU started quick. On the first pitch of the season, leadoff man Chris Cook (Kingsport, Tenn.) smashed a double to left-center. After fellow senior Aaron Maher (Brentwood, Tenn.) moved him over with a groundout to the right, senior Christian Bailey (Kingsport, Tenn) drove in his former high school teammate for ETSU’s first run of the season.

Following Bailey’s single, cleanup man Caleb Longley (Cleveland, Tenn.) carbon-copied Cook with a double into the gap, scoring Bailey to give the Bucs an early 2-0 lead.

In his next at-bat, Longley drilled a two-out homerun to right-center to push his team ahead 3-0. The senior gave ETSU its first dinger of the season. Longley finished the game 2-4 with two RBI.

“We all put in a lot of hard work in the offseason, and one thing I really wanted to work on last season was my swing,” Longley said. “I’m glad I was able to come out and had a good start. We excited to come out and get this first win, but we have these guys for three more games so we need to come out ready to play tomorrow.”

Senior outfielder Hunter Parker (Chattanooga, Tenn.) drove in the fourth run with a sacrifice fly to left in the fourth inning, scoring Jackson Greer (Knoxville, Tenn.). Parker added two steals to his hit and RBI on the day.

Maher and Bailey each picked up the other two RBI in the fourth inning to cap the scoring for ETSU. Bailey finished 2-4 on the day with a couple of RBI singles.

The Bucs and Norse plan to play the two middle-games Saturday, as the double-header begins at 12:00 p.m. inside Thomas Stadium. Game Three of the series is set to immediately follow at 2:30 p.m.