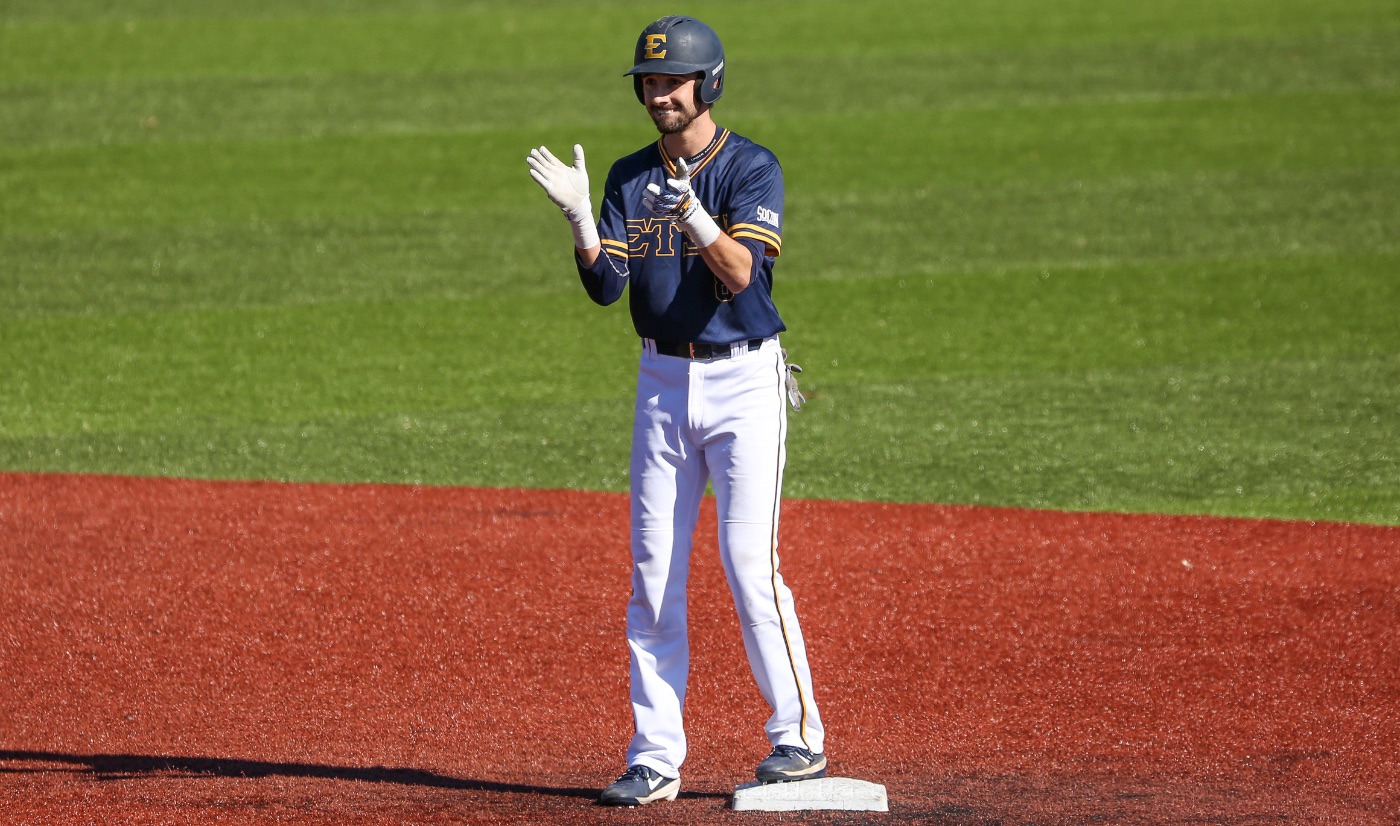 ETSU cruises to 7-2 victory in game two of series, fall 5-4 in nightcap

JOHNSON CITY, Tenn. (Feb. 18, 2018) – A home-opening series victory marked the beginning of what could be good things to come for the ETSU baseball team, as the Bucs took two of three from Northern Kentucky this weekend.

In the first of two games Sunday, ETSU clinched the series victory in a strong 7-2 victory. The Blue and Gold could not complete the sweep, as NKU held on at the end to take a 5-4 victory in the nightcap.

In the second game of the series — which also doubled as game one of Sunday’s double-header — saw senior Ryan Simpler (Lewes, Del.) earn his first win of the season with 5.0 innings in the seven inning contest. Simpler allowed two earned runs off four hits while recording nine strikeouts in 18 at bats.

The game didn’t start too hot for the Bucs as a leadoff homerun by NKU’s Jake Richmond opened the game. In the bottom of the second, ETSU had an answer as senior Chris Cook (Kingsport, Tenn.) doubled in two runs to gain the lead.

After an NKU RBI single tied things up in the third, the Bucs broke away in the final three innings with an offensive explosion. Senior Caleb Longley (Cleveland, Tenn.) crushed his second homerun of the season, scoring himself and senior Christian Bailey (Kingsport, Tenn.) to take a 4-2 lead.

Bailey would add the insurance his next time around, as a double to the right-center gap with the bases loaded scored all three runs to push the lead to 7-2.

Prior to this inning, senior right fielder Aaron Maher (Brentwood, Tenn.) moved to the mound, pitching his way to his first save of the season. The lefty allowed just one hit in his two innings, striking out three in the process.

The final game proved to be the closest, as NKU once again struck first. In the second inning, a wild pitch by freshman pitcher Matt Mercer (Chattanooga, Tenn.) with the bases loaded allowed one run to score. Mercer made his collegiate debut in the game, striking out five.

In the bottom half, sophomore catcher Jackson Greer (Knoxville, Tenn.) answered the call and then some. Greer drove a pitch deep into the Left Field Lounge, scoring himself and two others to give ETSU a 3-1 lead. This marks the second time in two seasons Greer’s first hit came on a homer to left at Thomas Stadium when ahead in the count.

The Norse earned two runs in the fourth inning with no outs to tie the game back at 3-3. This would end Mercer’s day with 3.0 innings, allowing three runs on seven hits.

Senior Drew Korzybski (Knoxville, Tenn.) would throw 3.2 innings of relief for his first action of the season. Despite impressively working out of a bases-loaded jam in the sixth, NKU would plate runs in the fifth and seventh to take the 5-3 lead.

ETSU would find a spark in the eighth, as Maher’s double would advance he and Cook into scoring position with one out. After a failed sacrifice fly attempt by Bailey to drive in Cook, a wild pitch allowed the fourth run to score and Maher to move to third base.

A long flyout by Longley, followed by a one-two-three ninth inning sealed the 5-4 win for NKU, leaving Johnson City with one of three games in the win column.

Bailey finished the day with three hits and three RBI on the day, tying him with Greer for the team-high in RBI. Maher led the Bucs with four hits, including a 3-for-4 showing in the first game while adding the save pitching-wise.

The Bucs return to action next weekend for their first road series of the season when they travel to Fort Meyer, Fla. to take on Florida Gulf Coast Feb. 23-25. Times for the three-game series are set for 6:30 p.m., 2 p.m. and 1 p.m., respectively.