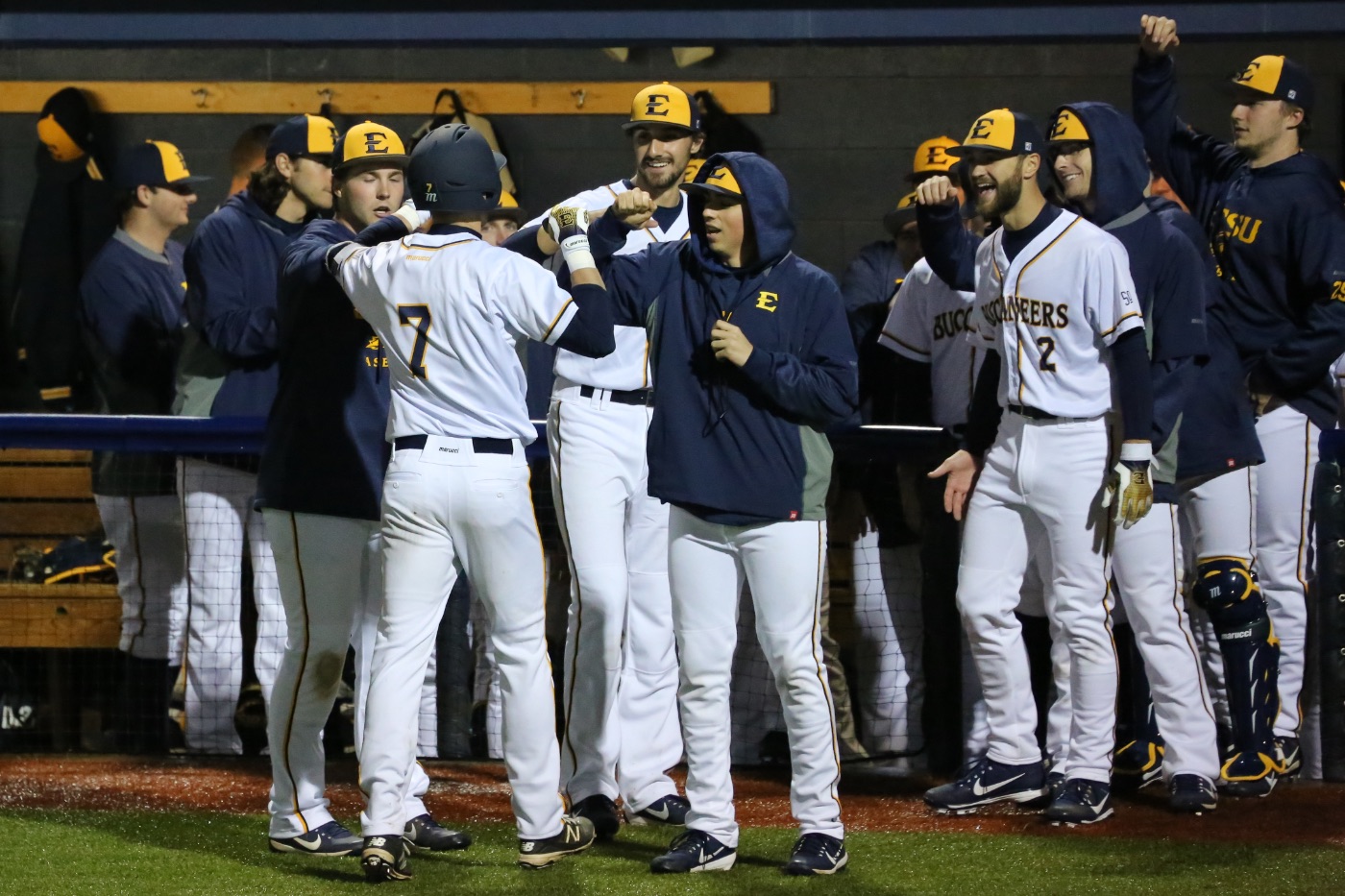 FORT MYERS, Fla. (Feb. 23, 2018) – In a back-and-forth contest that came down to the wire, a dramatic ninth inning became the deciding factor as ETSU earned a 10-8 victory over Florida Gulf Coast Friday night in Fort Myers, Fla.

Trailing 6-4 heading to the final two innings, the Bucs scored six unanswered runs to take an impressive 10-6 lead into the bottom of the ninth. After ETSU loaded the bases with one out, right fielder Aaron Maher (Brentwood, Tenn.) took over on the mound, walking in a run before striking out the final two outs to preserve the 10-8 comeback win.

The win improves ETSU’s record to 3-1, while FGCU falls to 4-1 with its first loss of the season. This win also marks the first road win as a head coach for first-year ETSU skipper Joe Pennucci.

Senior Caleb Longley (Cleveland, Tenn.) continued his strong efforts at the plate into this series, batting 3-for-5 with two runs and two RBI. Both RBI came off a single in the ninth, driving in two runners in scoring position to break a 6-6 tie.

Freshmen David Beam (Knoxville, Tenn.) and Sean Kearney (Powell, Tenn.) each came up big in the ninth, driving in the other two runs off a sacrifice fly and a single, respectively. Kearney singled in his first at-bat of the game, subbing in at third base in the eighth inning.

Maher picked up the save, as he inherited a bases-loaded situation that saw the go-ahead run at the plate and the tying run on first base.

After FGCU took an early 2-0 lead in the opening inning, ETSU answered immediately. Second baseman Cullen Smith (Lebanon, Tenn.) led off the inning with a solo homer to left field to cut the deficit in half, 2-1.

Moments later, catcher Jackson Greer (Knoxville, Tenn.) doubled home his fellow townsman, Beam, to even up the score. After FGCU recorded two outs, senior Chris Cook (Kingsport, Tenn.) drove in Greer with an RBI single to take the lead at 3-2.

ETSU extended the lead in the third inning with the bases loaded and nobody out, as Beam grounded into a six-four-three double play, scoring Christian Bailey (Kingsport, Tenn.) to make it 4-2.

FGCU answered with three runs in the bottom half, as two homers brought home three runs. The Eagles would extend its 5-3 lead in the next inning with a bunt single to bring in a run.

After four unanswered runs for FGCU, the Blue and Gold came alive in the eighth inning. Freshman Ben Jackson (Guyton, Ga.) pinch hit with the bases loaded and two out, working a 3-2 count into an infield single, scoring Longley.

On the same play, a throwing error by FGCU shortstop Christian Proffitt allowed Beam to score from third base, tying the game at 6-6 headed to the bottom of the eighth.

After a flawless, three-up-three-down inning by Korzybski and the Buccaneer defense, the ETSU bats woke up in dramatic fashion, giving Pennucci’s squad a four-run cushion to work with to close the game.

The Bucs return to action at Swanson Stadium tomorrow afternoon at 2 p.m. as they look to win the series before the finale on Sunday. Senior Ryan Simpler (Lewes, Del.) is expected to take the hill for Game Two.