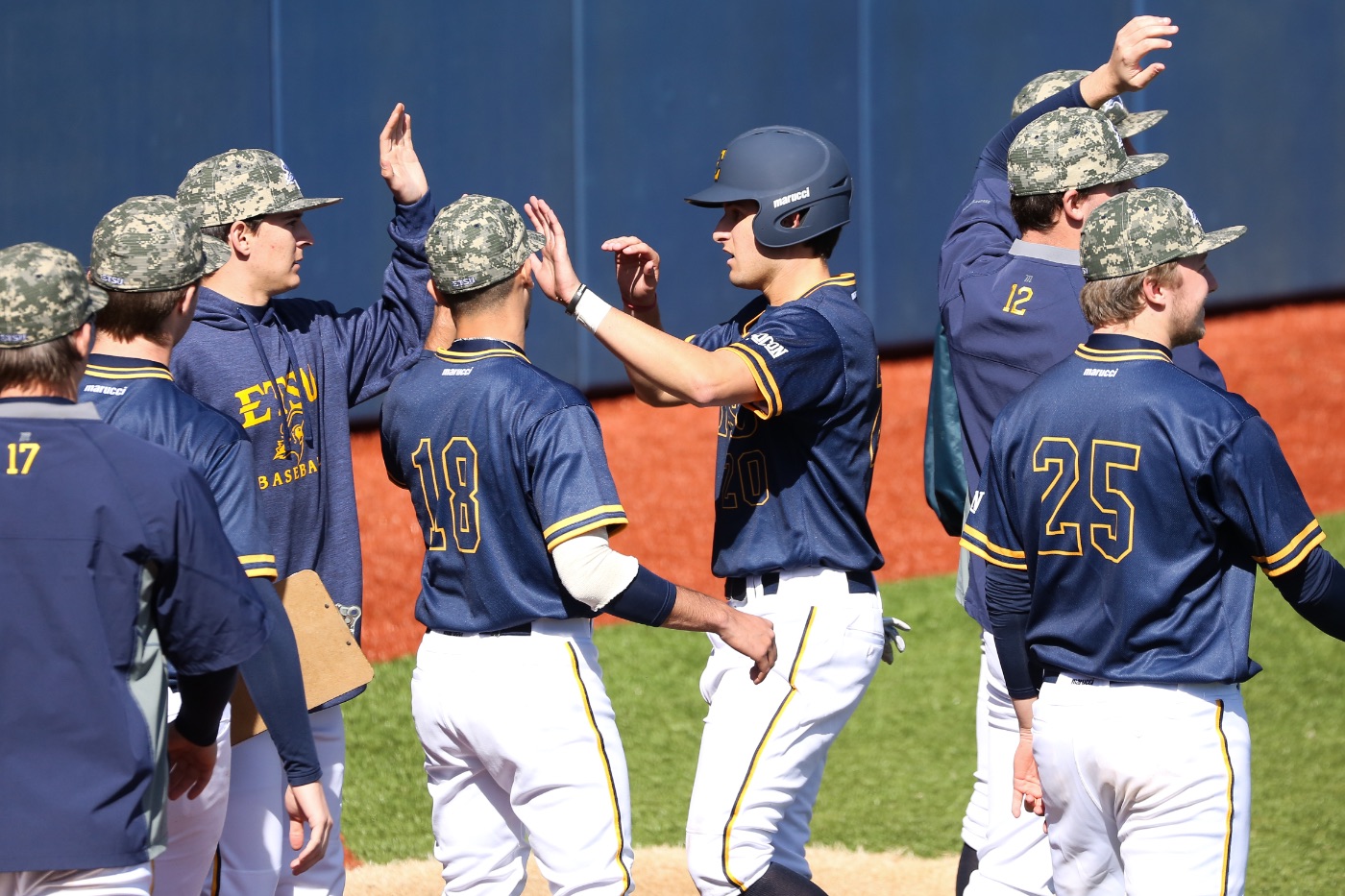 KNOXVILLE, Tenn. (March 2, 2018) – ETSU’s signature win may have came early this season, as a dramatic ninth inning spelled a 10-9 victory for the Bucs over in-state rival Tennessee at Lindsey Nelson Stadium Friday.

The win not only gives the Bucs a 1-0 start in the Tri-Star Classic tournament, but it also marks ETSU’s first road victory over Tennessee since 2014 when the Bucs knocked off No. 25 Tennessee 2-1 in Knoxville.

“Every win is a big win for us, but it’s really nice to get this one on a Friday night,” said ETSU head coach Joe Pennucci. “It felt like a really good team win with everyone getting involved. We competed on the mound and picked each other up when we got in tight situations. We’re learning our team and getting better every time we play.”

The Bucs led most of the way, but Tennessee would take a late, one-run lead into the final inning. Down to the final three outs, the ETSU bats came alive.

“Most of the time when you score first you’re in good shape,” Pennucci said. “We let them get into a rhythm and come back on us, then the ninth showed up. We got on base and got some big hits. Those ninth inning wins aren’t good for the heart, but it’s certainly exciting and good for the fans.”

Trailing 7-6, the Bucs started the ninth with a leadoff triple by Caleb Longley (Cleveland, Tenn.). After two more runners reached on walks, hometown hero Jackson Greer (Knoxville, Tenn.) came through with a game-tying sac fly while behind in the count.

“I knew I had to battle because I had two strikes on me,” Greer said. “I knew I just needed to put the ball in play and have an unselfish AB for my team and help us get this win. This will give us momentum heading into the rest of the weekend and event the rest of the season.”

In the next at-bat, pinch hitter Ethan Rice (Erwin, Tenn.) earned smashed a double to drive in the go ahead run. Tennessee pitcher Redmond Walsh would balk in the next at bat, bringing in another run and advancing Rice to third base.

With Rice on third, senior Chris Cook (Kingsport, Tenn.) rolled his fourth hit of the day, three of which were infield singles, scoring Rice to give ETSU a 10-7 cushion heading to the bottom half.

Maher, who moved from right field to the mound in the ninth inning, earned his team-high third save of the year despite allowing his first runs of the year on a two-run homer. Maher later earned the final two outs to secure the 10-9 win.

After ETSU starting pitcher Micah Kaczor (Tampa, Fla.) retired the first two hitters in the bottom half, Tennessee cleanup hitter Andre Lipcius evened things up with a two-run homer. Kaczor struck out the next hitter to keep the game tied heading to the second.

ETSU would plate three unanswered runs in the next two innings to take a 5-2 lead. Senior Aaron Maher (Brentwood, Tenn.) would drive in a run in the second inning before true freshman Sean Kearney (Powell, Tenn.) would earn his first career double essentially in his hometown to drive in two runs.

Tennessee scored one in each the fourth and fifth innings to pull within a run at 5-4, sophomore catcher Greer drilled a double to right-center in front of his hometown crowd, driving in his team-high seventh RBI this season to extend ETSU’s lead to 6-4.

The Vols would later tie things up in the seventh, hitting an RBI single off Drew Korzybski (Knoxville, Tenn.) and a sacrifice fly off James Giambalvo (Alhambra, Calif.) for the equalizer.

Giambalvo later worked his way out of a jam, setting up the exciting finish.

ETSU is now 3-0 in Friday games while also improving to 4-3 overall. Junior left-hander Corey Bates (Blaine, Tenn.) earned his first career win as a Buc, coming in relief during the eighth inning for Giambalvo to end the inning.

The Bucs will embark on Game Two of the Tri-Star Classic when it faces MTSU inside Lindsey Nelson Stadium. This game will be the nightcap on Saturday with an estimated 4 p.m. start time.