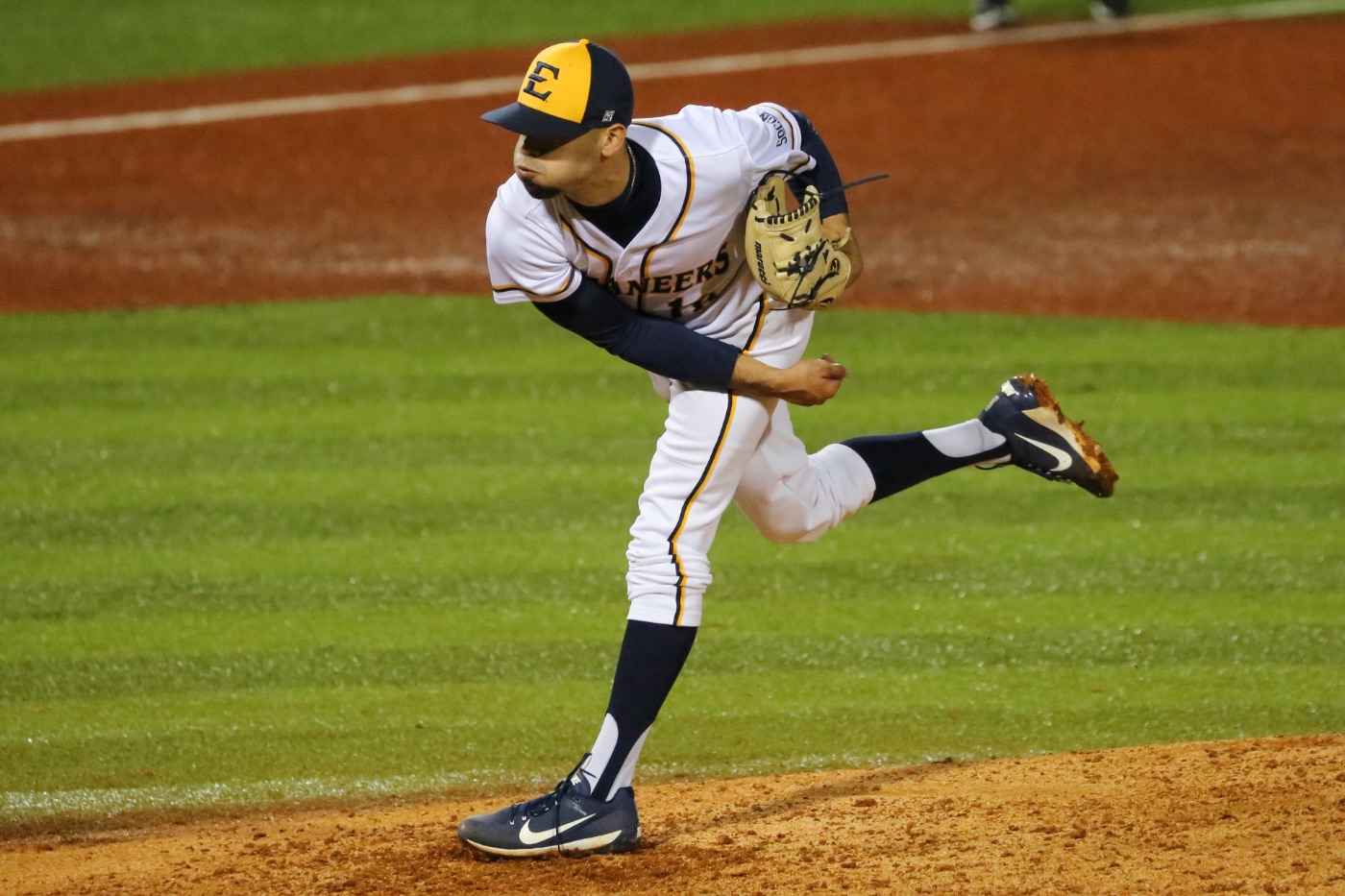 JOHNSON CITY, Tenn. (March 6, 2018) – After playing six games over two weeks on either road or neutral sites, the ETSU baseball team will return home for the first time since Feb. 18 for a four game home stand, beginning Wednesday, March 7 against Eastern Kentucky.

First pitch Wednesday afternoon is set for 4 p.m., but is subject to change depending on weather. For more details and instant updates, follow @ETSU_Baseball on Twitter.

Following an off day Thursday, the Bucs will begin a three-game home series against Winthrop on Friday, March 9 at 6:30 p.m. Saturday’s game is set for 2 p.m. while the series finale takes place Sunday at 1 p.m.

Wednesday's game will be streamed on the SoCon Digital Network with Mike Gallagher on the call. To watch, click here.

The Bucs return to Thomas Stadium with a 5-4 record that includes two key victories in last weekend’s Tri-Star Classic in Knoxville. As the road team, ETSU put together a ninth inning comeback to defeat Tennessee 10-9. The Bucs later knocked off Memphis two days later, 8-2.

With the two signature wins, ETSU finishes the tournament 2-1.

In the win against Tennessee, ETSU took an early 5-2 lead in the first three innings. The Vols would rally back in the middle innings, tying the game 6-6 heading into the eighth. After leading nearly the whole way, the Bucs surrendered the lead in the bottom of the eighth, giving UT a 7-6 lead heading to the final inning.

In the ninth, ETSU rattled off a four-run inning that saw a leadoff triple by Caleb Longley (Cleveland, Tenn.), a couple of walks to load the bases, a sacrifice fly by Jackson Greer (Knoxville, Tenn.), a two-RBI double by pinch hitter Ethan Rice (Erwin, Tenn.), and an RBI single by Chris Cook (Kingsport, Tenn.) for his fourth hit on the day.

In the bottom half, senior Aaron Maher (Brentwood, Tenn.) would come into close. After allowing his first runs of the season on a two-run homer to make the score 10-9, Maher would earn the final two outs to cap the signature victory.

After falling to MTSU Saturday, the Bucs rebounded with their third straight game of eight or more runs in an 8-2 victory. Heading to the sixth inning knotted up at two runs apiece, ETSU scored six runs to pull away. A solid pitching effort led by three no-hit innings by junior James Giambalvo (Alhambra, Calif.) closed out the game.

For the weekend, Cook led the Bucs with seven hits in 16 at-bats while Maher drove in six runs with five hits, including four RBI against Memphis. Senior Christian Bailey (Kingsport, Tenn.) moved to the six-hole for game two, but smashed ETSU’s first grand slam of the season for a five RBI weekend.

After the weekend, ETSU found itself ranked in the NCAA Division 1 national top ten for three important categories, two of which are individual statistics and one team statistic. Both individual stats rank first in the Southern Conference, while the team stat ranks second.

Freshman Ben Jackson (Guyton, Ga.) currently ranks second in the entire nation with an impressive on-base percentage of .630. Last weekend, Jackson went 5-for-8, drawing three walks and four hit by pitches to reach base 12 times in 16 tries. Speaking of hit by pitches, Jackson ranks No. 11 nationally in HBP per game at 0.63.

Senior Ryan Simpler (Lewes, Del.) is sixth in the nation in strikeout-to-walk ratio at 20.00. In three starts, the senior righty has 20 strikeouts to just one walk this season.

As a unit, ETSU’s pitching staff has compiled 11.0 strikeouts-per-nine innings which ranks seventh in the nation. SoCon rival Mercer is just ahead of ETSU with a nation-leading 13.5 K’s per nine innings.

The Colonels will play back-to-back midweek games coming into Johnson City, as they travel to in-state rival Kentucky Tuesday at 4 p.m.

Heading into this week, EKU brings a 5-6 overall record. After opening the season 1-6 — all on the road — the Colonels are riding a four game win streak that includes a 9-0 single-game win over Bowling Green and a weekend sweep of Coppin State.

Much like ETSU’s offensive production, the Colonels’ offense has scored at least nine runs in the last four games and 10 runs in the last three. EKU outscored Coppin State 29-5 in the first two games of the series before capping the sweep with a 10-8 win.

Offensively, the player to watch is junior infielder Ryland Kerr. Kerr has a team-high 15 hits, starting all 11 games as either the leadoff man or second hitter. For the weekend, Kerr went an impressive 10-13 at the plate to spark a three-game hit streak.

Sophomore outfielders Chris Bostoe and Nick Howie work as a two-headed monster, driving in a team-leading 10 RBI apiece. Bostoe has started every game in left field and is surprisingly finding success as the ninth hitter, leading EKU to a 5-0 record in that spot. The powerful Howie has started a number of games as the DH, hitting fourth or fifth in the lineup.

Pitching matchups for both ETSU and EKU have yet to be announced, but the Colonels have started junior righty Logan Teague and freshman lefty Will Brian in its two midweek games.

The Colonels lead the all time series with a 52-37-1 record through 90 games.

With four hours separating Johnson City and Richmond, Ky., EKU is tied with The Citadel as ETSU’s fourth most storied opponent at 90 matchups, trailing only Appalachian State (136), Western Carolina (101) and VMI (93).

The last meeting between the two schools took place April 20, 2016 in a single-game meeting in Richmond. The Bucs tied a season high with 17 runs in a historic 17-8 victory over the Colonels, as every starter had at least one hit and scored at least one run in the win.

Another then sophomore, Ryan Simpler was one of eight pitchers to earn playing time in the game, facing four batters with three strikeouts and no hits, walks or runs allowed.