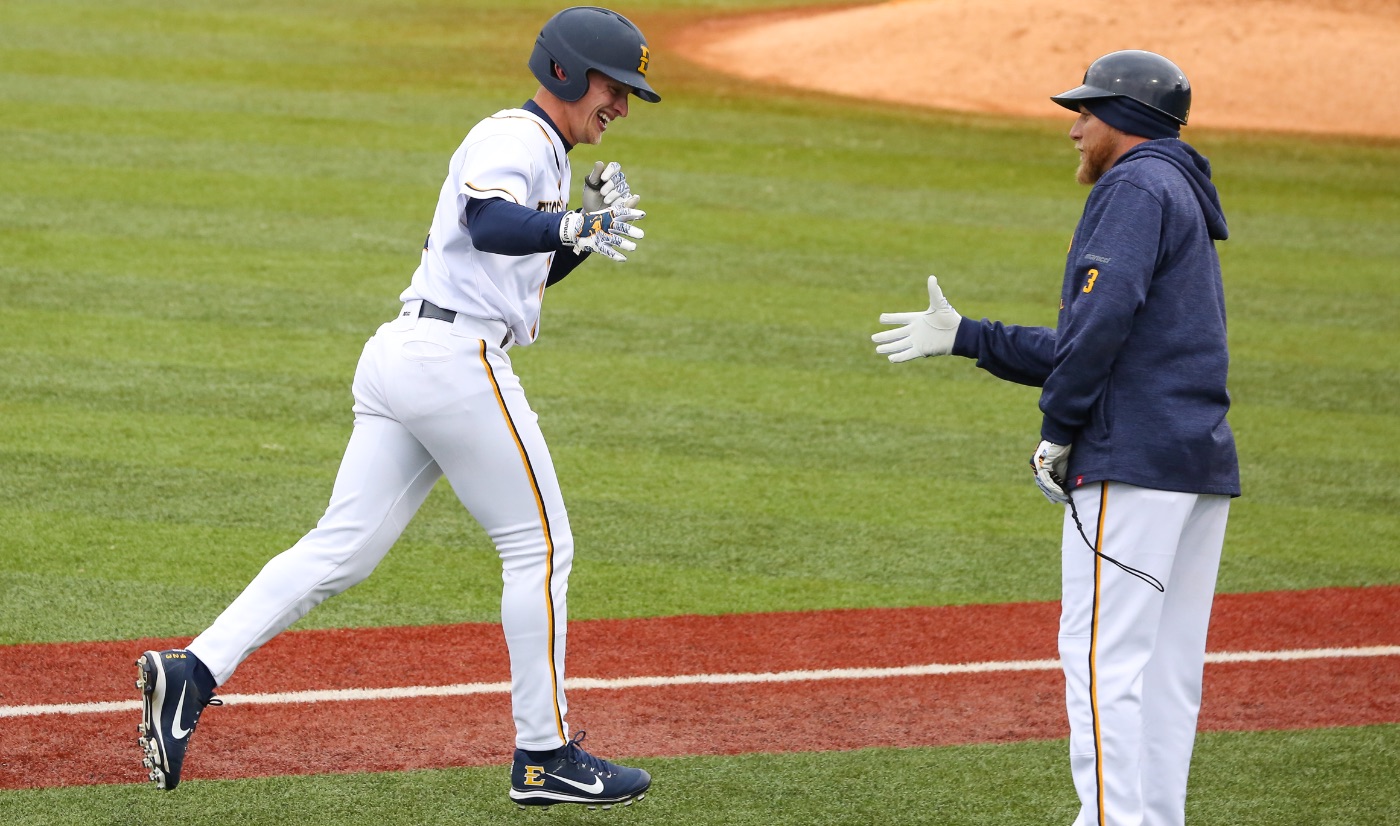 JOHNSON CITY, Tenn. (March 7, 2018) – The Buccaneer bats came alive in ETSU’s return to Thomas Stadium Wednesday night, as the first midweek game of the season goes down as a 12-7 win over Eastern Kentucky.

The scoring opened with the only homer of the day, as senior centerfielder Hunter Parker (Chattanooga, Tenn.) blasted his first of the season with a two-run shot over the centerfield wall. His second inning blast gave the Bucs an early 2-0 advantage.

In the next inning, the Bucs would strike again. After nailing a single and scoring off Parker’s homerun his first time, Smith would drive a double to right field, scoring Bailey to take a 3-0 lead.

EKU stormed back in the fourth, taking the lead in a crazy four-run inning that saw only one hit and one error. The lead didn’t last long, as ETSU rattled off a six run inning that saw five straight hits, beginning with a single by nine hole hitter Cade Gilbert (Ringgold, Ga.).

Following the sophomore was Cook at the top of the order with a single. Senior Aaron Maher (Brentwood, Tenn.) would then drive in Gilbert, then Bailey would single to drive in Cook. Senior Caleb Longley (Cleveland, Tenn.) broke the trend with an RBI double to score Maher, pushing ETSU’s newfound lead to 6-4.

After another run scored on a sacrifice fly by Ben Jackson (Guyton, Ga.), two more runs would find their way home on a wild pitch. Smith dominated the basepaths after reaching on a hit by pitch, stealing second then coming all the way around to score on the stray pitch.

The 9-4 lead would hold, as ETSU would add three more runs in the fifth and sixth to make it nine unanswered. In the ninth, Eastern Kentucky attempted one last rally, plating three runs before senior pitcher Drew Korzybski (Knoxville, Tenn.) forced a groundout to end the game at 12-7.

Coming in to pitch with a 4-3 deficit in the fourth, senior Logan Gentry (Kingsport, Tenn.) helped the Bucs out of the inning and earned the win after the six run bottom half. Gentry went 3.1 innings for ETSU, the longest of six appearing Buc pitchers, allowing just one hit and no runs against 11 hitters.

The Bucs improve to 6-4 and are now 1-0 in midweek contests. Next up, ETSU will return to Thomas Stadium Friday night, March 9, to commence a three game weekend series against Winthrop. First pitch is set for 6:30 p.m. in Johnson City.