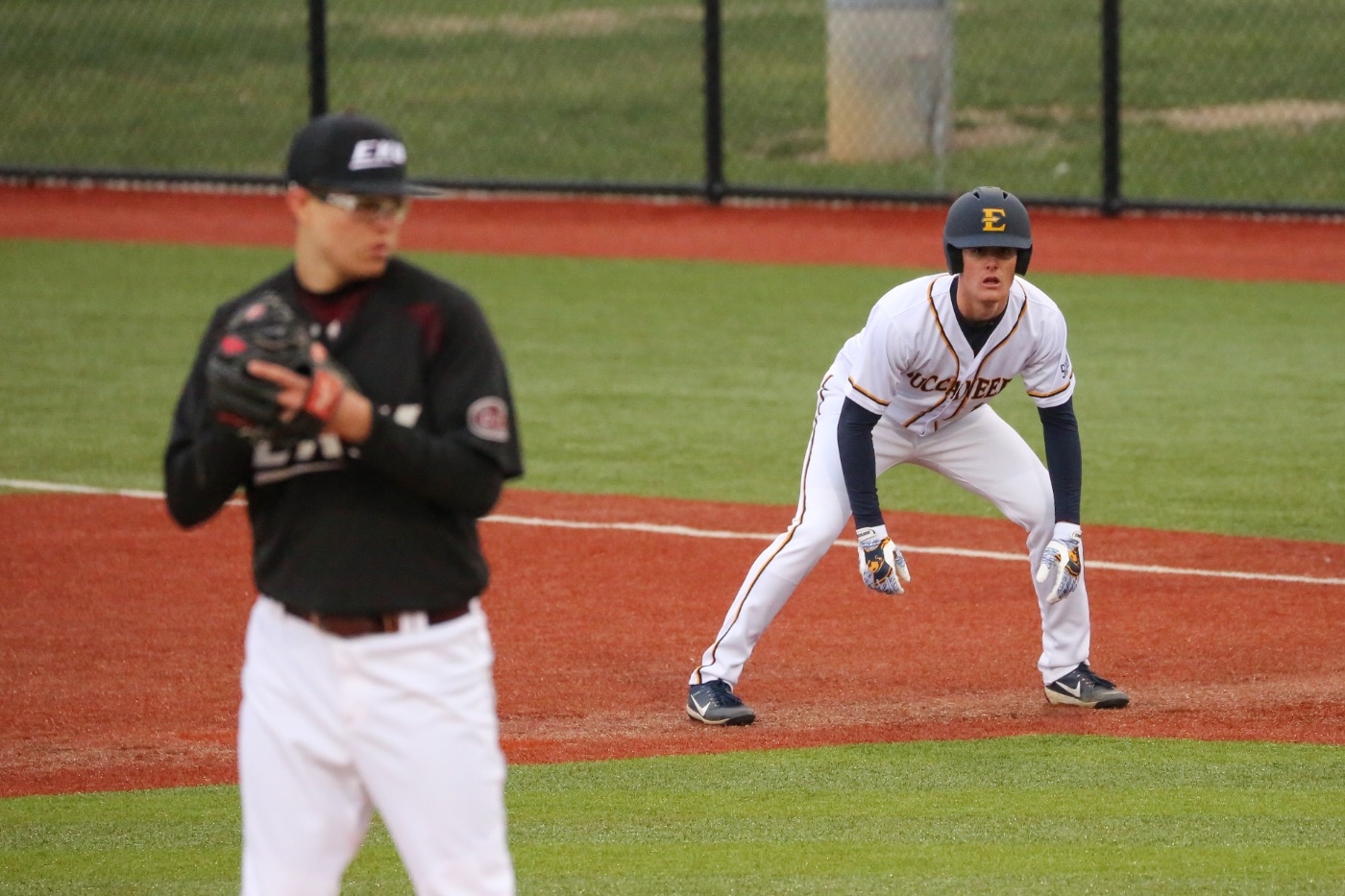 JOHNSON CITY, Tenn. (March 8, 2018) – Coming off a season high 12 run performance in a win over Eastern Kentucky, the ETSU baseball team returns to action Friday afternoon for a weekend series against Winthrop.

Due to inclement weather expected to hit the Tri-Cities this weekend, ETSU baseball’s three-series home series with Winthrop has been altered.

The Bucs and Eagles will now play a doubleheader on Friday with the series finale scheduled for Saturday.

Friday’s doubleheader will begin at 1 p.m. at Thomas Stadium with the nightcap set to begin approximately 30 minutes following the conclusion of game one.

Saturday’s start time has yet to be determined.

ETSU now holds a 6-4 record and brings momentum into Friday’s double-header. The Buccaneer offense tallied 12 runs on 16 hits for season highs in a 12-7 win over EKU. Trailing 4-3, the Blue and Gold scored nine unanswered runs.

Senior centerfielder Hunter Parker (Chattanooga, Tenn.) blasted his first home run of the season with a two-run shot over the centerfield wall. His second inning blast gave the Bucs an early 2-0 advantage.

Coming in to pitch with a 4-3 deficit in the fourth, senior Logan Gentry (Kingsport, Tenn.) helped the Bucs out of the inning and earned the win after the six run bottom half. Gentry went 3.1 innings for ETSU, the longest of six appearing Buc pitchers, allowing just one hit and no runs against 11 hitters.

Prior to the EKU game, the Bucs returned to Thomas Stadium with a 5-4 record that included two key victories in last weekend’s Tri-Star Classic in Knoxville. As the road team, ETSU put together a ninth inning comeback to defeat Tennessee 10-9. The Bucs later knocked off Memphis two days later, 8-2.

With the two signature wins, ETSU finishes the tournament 2-1.

In the win against Tennessee, ETSU took an early 5-2 lead in the first three innings. The Vols would rally back in the middle innings, tying the game 6-6 heading into the eighth. After leading nearly the whole way, the Bucs surrendered the lead in the bottom of the eighth, giving UT a 7-6 lead heading to the final inning.

In the ninth, ETSU rattled off a four-run inning that saw a leadoff triple by Caleb Longley (Cleveland, Tenn.), a couple of walks to load the bases, a sacrifice fly by Jackson Greer (Knoxville, Tenn.), a two-RBI double by pinch hitter Ethan Rice (Erwin, Tenn.), and an RBI single by Cook for his fourth hit on the day.

In the bottom half, senior Aaron Maher (Brentwood, Tenn.) would come into close. After allowing his first runs of the season on a two-run homer to make the score 10-9, Maher would earn the final two outs to cap the signature victory.

After falling to MTSU Saturday, the Bucs rebounded with their third straight game of eight or more runs in an 8-2 victory. Heading to the sixth inning knotted up at two runs apiece, ETSU scored six runs to pull away. A solid pitching effort led by three no-hit innings by junior James Giambalvo (Alhambra, Calif.) closed out the game.

For the weekend, Cook led the Bucs with seven hits in 16 at-bats while Maher drove in six runs with five hits, including four RBI against Memphis. Bailey moved to the six-hole for game two, but smashed ETSU’s first grand slam of the season for a five RBI weekend.

After the weekend, ETSU found itself ranked in the NCAA Division 1 national top ten for three important categories, two of which are individual statistics and one team statistic. Both individual stats rank first in the Southern Conference, while the team stat ranks second.

Freshman Ben Jackson (Guyton, Ga.) currently ranks second in the entire nation with an impressive on-base percentage of .630. Last weekend, Jackson went 5-for-8, drawing three walks and four hit by pitches to reach base 12 times in 16 tries. Speaking of hit by pitches, Jackson ranks No. 11 nationally in HBP per game at 0.63.

Senior Ryan Simpler (Lewes, Del.) is sixth in the nation in strikeout-to-walk ratio at 20.00. In three starts, the senior righty has 20 strikeouts to just one walk this season.

As a unit, ETSU’s pitching staff has compiled 11.0 strikeouts-per-nine innings, which ranks seventh in the nation. SoCon rival Mercer is just ahead of ETSU with a nation-leading 13.5 K’s per nine innings.

The Eagles bring momentum into Johnson City, coming off an 8-1 home win against ETSU’s conference rival, The Citadel, last night in Rock Hill, S.C. Winthrop scored an impressive seven runs in the first inning to set the tone, holding the Bulldogs scoreless in the final eight innings.

Winthrop holds a 5-8 record this season, including an 0-6 record on the road. The Eagles have faced stiff competition so far with No. 9 Ole Miss, No. 12 Clemson, South Carolina and Kent State as notable opponents.

Sophomore catcher Alex Raines leads the Eagles’ bats with a .300 batting average with nine starts and 11 appearances so far. Junior outfielder Hunter Lipscomb leads Winthrop with 13 hits on the season, including five doubles, a homer and nine RBI.

A Freshman of the Year selection by Perfect Game USA last season, sophomore Zach Peek is another force to be reckoned with. He currently holds a 2-1 record with a 3.66 ERA and a team-high 28 strikeouts to just three walks.

Through 11 games, Winthrop holds a 9-2 advantage in the all-time series. The two sides last met in 2016, splitting a two game season series.

The Bucs’ last victory over the Eagles came March 22, 2016 at Winthrop Ballpark in Rock Hill, S.C. ETSU won 7-5 in the contest.

Winthrop returned the favor May 4 in Johnson City that season, defeating the Bucs in a 2-1 decision. Logan Gentry and Russell Koesters were part of the unit who threw seven scoreless innings in that meeting, but two early runs for Winthrop proved to be the difference.