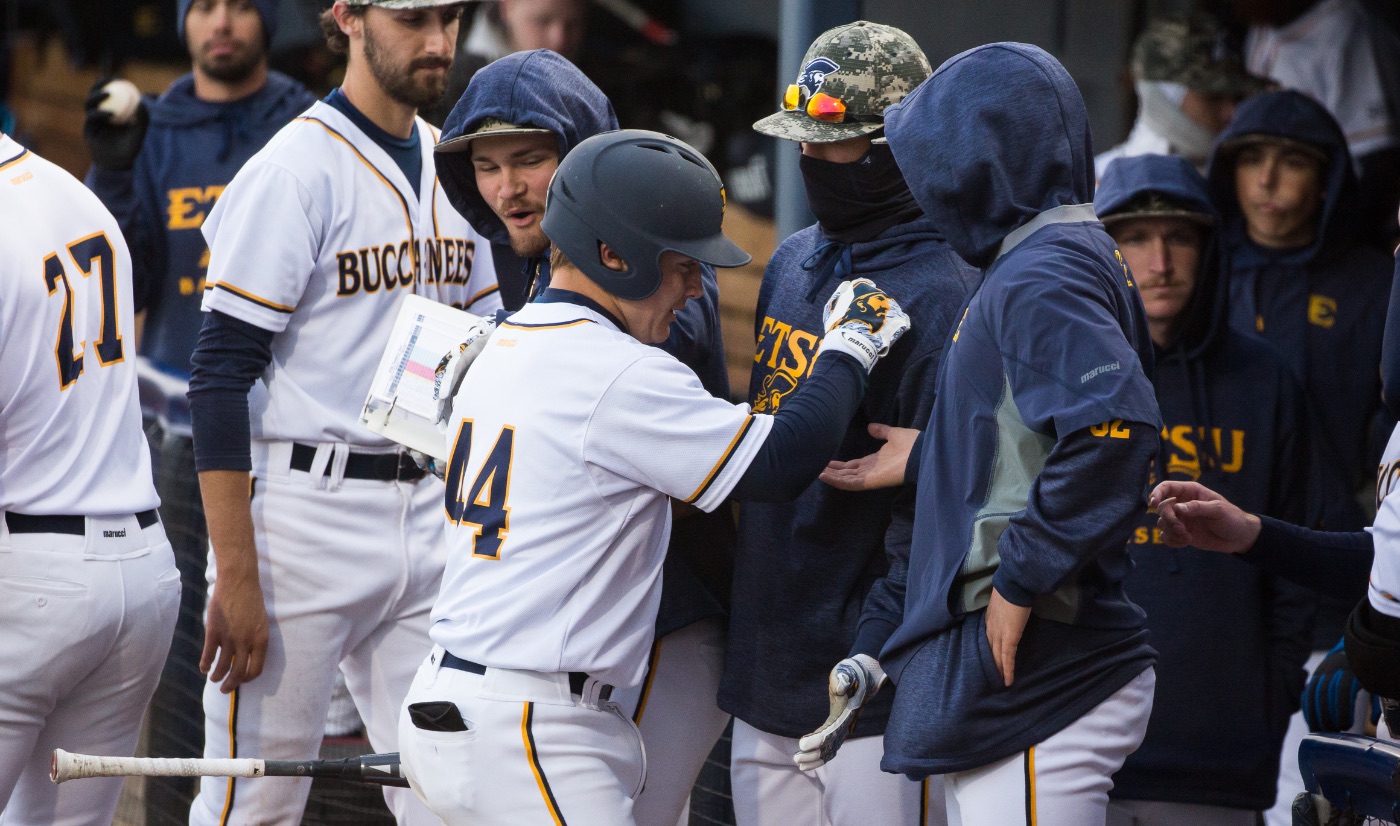 JOHNSON CITY, Tenn. (March 9, 2018) – The ETSU baseball team is riding a wave of momentum, as the Bucs sailed to two victories over Winthrop Friday in double-header action at Thomas Stadium.

With the 8-4 and 7-3 victories, ETSU improves to 8-4 on the season, including a 5-1 mark at home. Furthermore, the Bucs are on a four game win streak this month and are also now 5-0 in Friday contests.

Sophomore Cullen Smith (Lebanon, Tenn.) and senior Caleb Longley (Cleveland, Tenn.) each added three hits, with all of Longley’s in Game One and Smith’s in Game Two. Longley, Jackson and senior Aaron Maher (Brentwood, Tenn.) each had three RBI to lead ETSU.

Also in the nightcap, ETSU head coach Joe Pennucci rolled the dice a bit with a double steal call. The steals caught Winthrop off guard and put both lead-runner Christian Bailey (Kingsport, Tenn.) and Jackson in scoring position. This marked the first double steal of the season.

The Bucs will go for their first sweep of the season tomorrow in the series finale. First pitch at Thomas Stadium is set for 2 p.m.

Junior ace Micah Kaczor (Tampa, Fla.) got the start for ETSU, throwing 104 pitches through a career-high 7.1 innings to pick up his second win of the year — both at home. Kaczor also baffled Winthrop with 10 strikeouts; marking the second time in two home games he tallied double-digit strikeouts. He allowed just two hits on the day.

Fellow junior transfer James Giambalvo (Alhambra, Calif.) picked up where Kaczor left off, allowing one run off one hit, but nothing else, to secure the win.

With two runners on in a hitter’s count, Longley reared back and homered to left field to score his senior teammates Cook and Bailey. ETSU took a comfortable 5-0 lead into the fourth.

Winthrop would break through the next half inning, drawing a leadoff walk before hitting a two-run shot to left field — the only hit and runs Kaczor would allow until the eighth inning.

After three scoreless innings, ETSU extended its 5-2 lead as Maher touched home on a wild pitch. Later in the inning, Smith drove in Longley with a single through the right side. Smith accounted for another run that inning, as Jackson scored on Smith’s rundown between first and second.

Taking an 8-2 lead into the eighth, Winthrop attempted to rally. While leadoff man Mitch Spires reached on an error, catcher Alex Raines crossed home. Giambalvo would then come in to slow down the rally.

Winthrop plated one more run in the ninth of a pinch-hit groundout by Connor O’Brien, but Giambalvo would record the final out to secure the first of two ETSU wins.

The scoring did not begin until the third inning, as ETSU finally broke through in an early pitcher’s duel to load the bases. Maher drove in the first run with a ground ball. Later in the inning, Gilbert would cross on a wild pitch for a 2-0 lead.

Winthrop surged back in the next half inning, tying the game with back-to-back RBI singles. The Eagles would take the 3-2 lead with a bases loaded double play, as the Bucs exchanged a run for two outs.

In the next half inning, Jackson connected on the first pitch he saw, dropping a one out solo shot slightly over the left field wall for his first career homer. The solo bomb tied the game at three runs apiece.

ETSU took the lead for good in the fifth, as Maher placed a bunt perfectly down the third base line to reach base safely. On the throw, heads-up base running by Gilbert plated his second run of the game for the 4-3 lead.

Later in the inning, Jackson came through with the bases loaded as he lined one past the infield through the left side for a two-RBI single.

The final run came courtesy of Maher, driving in an insurance run off a sacrifice fly to score Parker. Maher wiped out his own save situation with the run, coming into pitch the final three outs in order to ensure the victory.