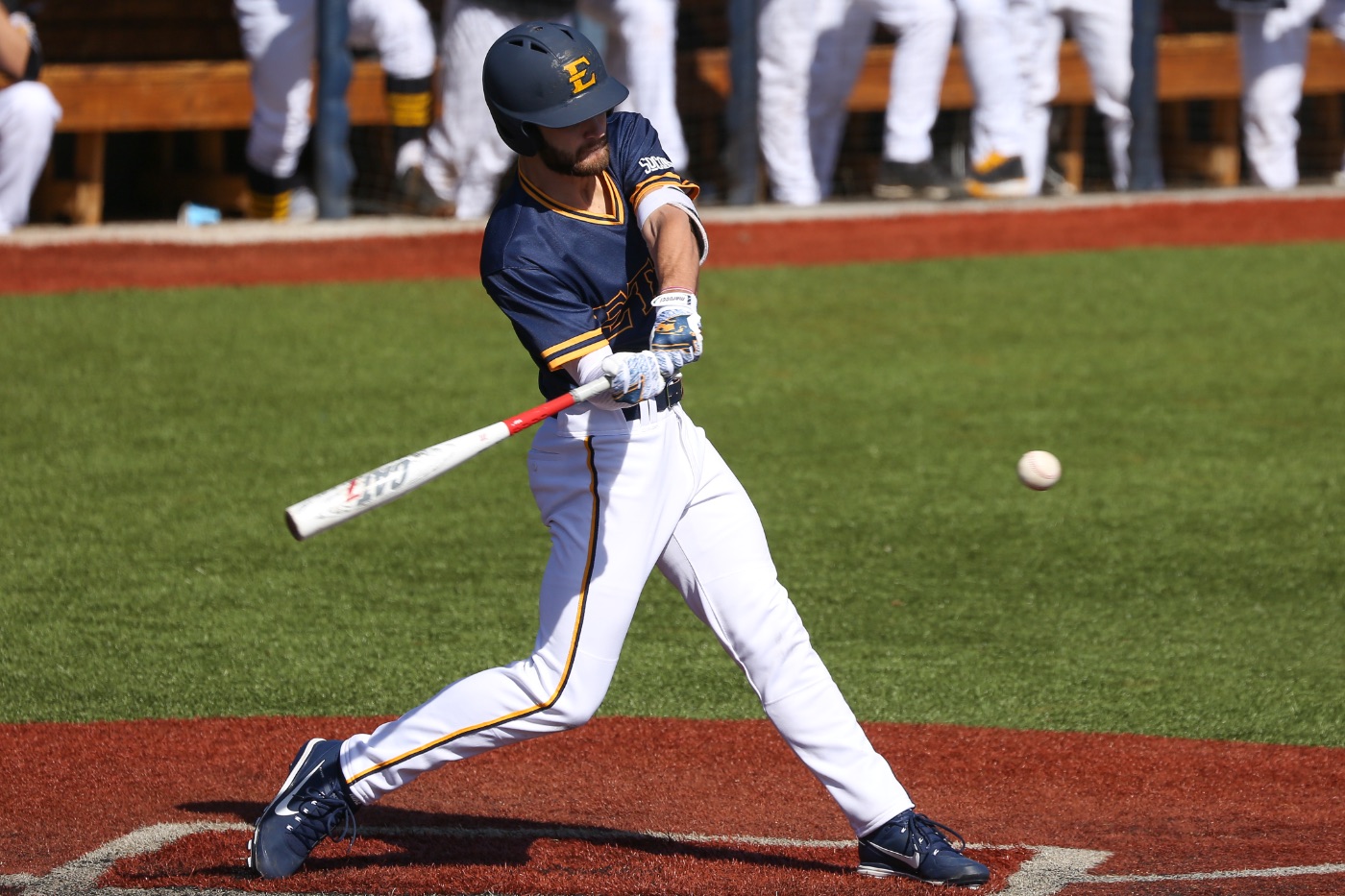 JOHNSON CITY, Tenn. (March 10, 2018) – For the first time this season, the ETSU baseball team picked up the brooms.

After taking the first two games over Winthrop Friday, the Buccaneers scored eight unanswered runs to overcome a three-run deficit en route to a 10-5 win. With the victory, first year ETSU skipper Joe Pennucci earned his first career sweep as a head coach.

“We did exactly what we needed to do,” Pennucci said. “(Winthrop) had really good starting pitching, but we were able to hang in there, get some good at bats and get them out of the game. We put some runs on the board, and on the flipside, we did a really good job on the mound.”

The Bucs now ride a five game win streak for the first time since April of last season, improving to a 9-4 overall record and a 6-1 mark at Thomas Stadium.

The one-two punch of senior Chris Cook (Kingsport, Tenn.) and Aaron Maher (Brentwood, Tenn.) each blasted home runs in the series finale, not only hitting solo shots but also milestones.

Maher’s first inning homer marked career hit No. 200, while Cook’s solo bomb in the fifth inning gave him hit No. 250. Both have a shot to crack the top three all-time career hit list for ETSU at 282. Paul Hoilman is the all-time leader with 307 from 2008-11.

Senior Christian Bailey (Kingsport, Tenn.) also enjoyed a career day, doubling in his first three at-bats to set a career-game high. He drove in a team-high four RBI in the process, tying a career high.

Maher’s homer opened the scoring, but Winthrop would scatter five runs over four innings to take the lead. An RBI double by Bailey in the third would tie the game 2-2, but three runs by Winthrop gave it a 5-2 lead.

The Bucs then rattled off eight unanswered — starting in the fifth with Cook’s homer to left. Two more runs crossed to tie the game in the fifth. After Logan Gentry (Kingsport, Tenn.) worked out of a jam in the sixth to keep the tie in tact, the Bucs would take the lead.

In the sixth, Bailey would smash his third double of the day into left field, scoring Maher and Hunter Parker (Chattanooga, Tenn.) for the 7-5 lead.

The Bucs would tack on three insurance runs in the seventh and eighth innings, including a two-RBI single by Cook and a wild pitch score by pinch runner David Beam (Knoxville, Tenn.).

Gentry came in relief, working out of the fifth inning to pitch four scoreless outs for the win. Junior Dominick Stefanacci (Fort Meyers, Fla.) threw the final three innings, keeping Winthrop hitless and scoreless while striking out five to earn his first career save at ETSU.

The top of the order proved to be the most productive in the finale, as Bailey and Maher each had a team-high three hits, while leadoff man Chris Cook drove in three RBI to go with Bailey’s four. Both Cook and Bailey had two RBI that came in two-out situations.

The other two runs batted in came courtesy of Maher and cleanup man Caleb Longley (Cleveland, Tenn.). Maher also crossed home four times, two of which came on doubles by Bailey where he scored all the way from first base.

After four successful home games, the Bucs hit the road for seven straight away games. The stretch begins next Friday, March 16 when ETSU takes on William & Mary in a three-game series. First pitch in the opener is set for 6 p.m. in Williamsburg, Va.