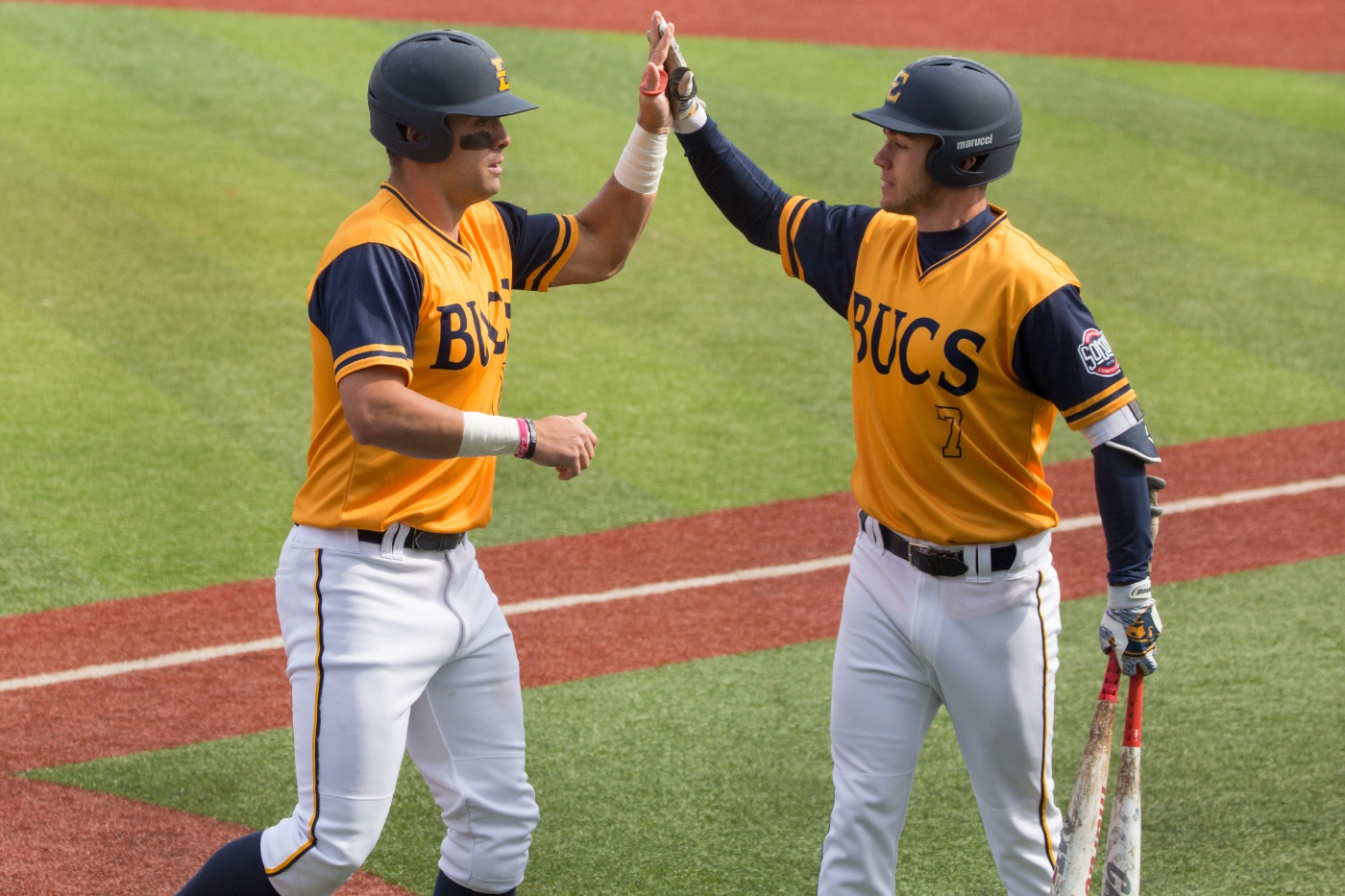 After sweeping Winthrop last weekend, the Bucs will have five days off heading into Friday night’s contest. ETSU is 5-0 in Friday games so far and are 6-0 when playing after at least one day of rest.

ETSU earned four solid home wins last week, including a 12-7 midweek victory over Eastern Kentucky, followed by 8-4, 7-3 and 10-5 wins over the Eagles March 9-10 at Thomas Stadium. The sweep marked the first for first-year skipper Joe Pennucci.

In the series finale, ETSU baseball picked up its 1,200th all-time win. Two more milestones came in that game, as Cook and Maher each launched homers. Cook hit marks No. 250 for his career, while Maher’s first inning shot marked No. 200.

Senior Christian Bailey (Kingsport, Tenn.) has been on a roll the past four games, racking up five doubles for last week in games vs. Eastern Kentucky and Winthrop. In the series finale, the local product from Dobyns-Bennett doubled in three straight at-bats. He now has seven on the season, tied for 2nd in the SoCon.

After senior Drew Korzybski (Knoxville, Tenn.) kept the Eagles off the scoreboard in 2.0 innings of work, Maher came into close. The lefty used only eight pitches and seven strikes to retire three batters in the close, striking out one in the three-up three-down final inning.

Game three saw Russell Koesters (Kingsport, Tenn.) pick up his second start of the season, as he went 4.2 innings leaving with a tie ballgame. Logan Gentry (Kingsport, Tenn.) would come in and earn the victory after the Bucs broke through with more of their eight unanswered runs.

Junior Dominick Stafanacci (Fort Myers, Fla.) earned his first career save as a collegiate baseball player, throwing a 3.0 inning no-hitter with five strikeouts and just one walk to preserve a 10-5 win.

The Tribe are 6-12 on the season with five of their six wins coming in Williamsburg at the friendly confines of Plumeri Park. Most recently, W&M knocked off Lehigh in midweek action by a final of 12-2.

In the win over Lehigh, junior shortstop Zach Pearson went 3-for-4 with two runs and three RBI. He leads the Green and Gold offense with a .299 batting average in 18 starts and team-highs of 20 hits and 12 runs.

Junior catcher and designated hitter Hunter Smith leads the Tribe with 13 RBI on the season, typically batting in the three or four hole. He bats .257 with a couple of homers and two doubles.

On the mound, W&M posts a 4.39 team ERA. The staff is lead by junior Bodie Sheehan, who holds a 1-1 record with a 1.57 ERA in four starts. Sheehan is expected to start Saturday against ETSU’s Ryan Simpler in a battle of wily vets.

A wild card player for W&M to watch for is junior Nick Butts. Not only will Butts start against Kaczor on the mound in the series opener, but he also owns eight starts in the outfield (four in left, one in center, three in right).

The two schools have met just five times for baseball, marking the second fewest all-time matchups between ETSU and any of its opponents this season. The Bucs hold the series advantage, 4-1.

Last season, ETSU swept the Tribe in Johnson City in a three-game series. The Bucs outscored W&M 32-12 on the weekend.

Simpler struck out a career-high 11 hitters in game one’s 15-3 win. On that weekend, four current Buccaneers went yard as Smith, Bailey, Cook and Longley each hit a homer. Cook and Longley’s homers helped spark a five-run comeback in the series finale, where the Bucs won 8-6.

William & Mary will provide live stats and a video stream of each game in the series. For links, check the “related links” box on the right or see the schedule portion of this preview.