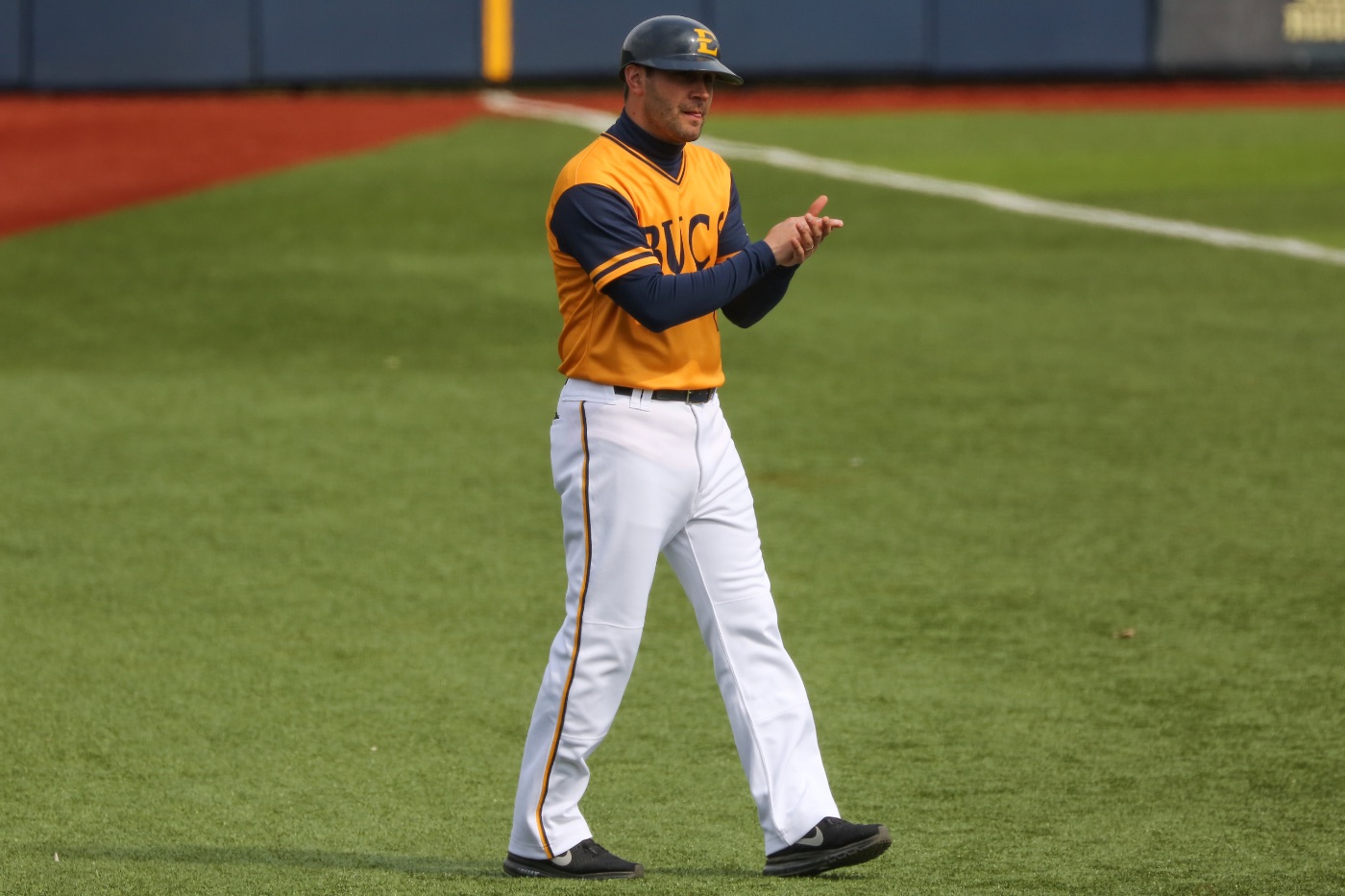 JOHNSON CITY, Tenn. (March 22, 2018) – The Southern Conference portion of the schedule officially kicks off tomorrow for the ETSU baseball team, as the Bucs travel to Birmingham, Ala. to face Samford March 23-25.

The series opener tomorrow is set for 7 p.m. and will mark the first Southern Conference contest for first-year ETSU head coach Joe Pennucci.

The Bucs conclude a seven-game road swing in the Yellowhammer State Sunday, a stretch that includes Tuesday night’s 9-6 victory over Tennessee in Knoxville that clinched the season series for ETSU.

For the second time in two tries, ETSU defeated the Tennessee Volunteers in Knoxville by taking a late lead. After scoring four ninth inning runs to win 10-9 the first time around, the Bucs exploded in the seventh with four runs to take a 9-6 lead.

For the second time in two contests with the Vols, hometown hero Jackson Greer (Knoxville, Tenn.) had a big hand in the win. From the nine hole, the sophomore catcher had a couple of hits, two runs and two RBI. Both RBI came in the third inning off a two-run bomb to left field.

The bottom of the order went a combined 4-for-6 on the day, as senior Hunter Parker (Chattanooga, Tenn.) went 2-for-2 with a couple of doubles, two walks and a hit by pitch —reaching in all five at bats and scoring a career-high four runs.

Senior Christian Bailey (Kingsport, Tenn.) added three hits and an RBI against the Vols. He now has a team-high batting average of .382 while leading the team with 26 hits, nine doubles and 20 RBI.

The trio of Chris Cook (Kingsport, Tenn.), Ben Jackson (Guyton, Ga.) and Aaron Maher (Brentwood, Tenn.) each boast batting averages above .300 as the one-two-three hitters for ETSU. This lineup arrangement began two games ago, moving Bailey to the cleanup spot.

Giambalvo picked up the win, helping the Bucs remain in striking distance in order to later take the lead with 2.0 scoreless innings and just two hits allowed. Korzybski picked up his first save of the season, pitching the last two innings allowing just one hit with no runs.

ETSU’s conference opening opponent from Birmingham, Ala. holds a 10-12 record on the season and has an early signature win over No. 22 UCF under its belt. The Bulldogs snapped a three-game win streak in its last outing, falling to Troy 14-2 in midweek action Tuesday.

As a team, Samford’s pitching has been the cornerstone this season. As a unit, the Bulldogs lead the SoCon after non-conference play with a 4.23 ERA in 22 games. The team is also second in the conference in strikeouts with 211.

Samford ace Cody Shelton, who is scheduled to pitch Friday, comes into the season as a preseason first team All-SoCon selection after tossing a 2.69 ERA in 63.2 innings in 2017. This year, Shelton owns a 2.96 ERA. Shelton will face former high school teammate Aaron Maher this weekend.

Saturday starter Samuel Strickland has the lowest ERA of the three at 1.25 through 21.2 innings and four starts. The true freshman has allowed just eight hits and six runs this season and garnered back-to-back SoCon Player of the Week Honors earlier this season.

Offensively, the Bulldogs are led by preseason All-SoCon second teamer Troy Dixon. The leadoff man has a team-high 23 hits with a .291 average. Dixon also ranks 10th in the NCAA and second in the SoCon in walks with 21.

Sophomore catcher Anthony Mulrine bats in the three-hole for the Bulldogs, racking up a tem-high 19 RBI with five homers. The SoCon All-Freshman led the conference last season with 27 runners caught stealing under his watch.

In 12 games, ETSU leads the all-time series over Samford 7-5. Among conference opponents, ETSU has faced Samford the least as the teams have only been together in the SoCon since 2015.

The first and only non-conference contest came in 2005, with ETSU earning the 11-6 win in Johnson City as a midweek contest. All other games have been in conference action, with ETSU holding the 6-5 edge.

The two squads have faced off in the conference tournament in back-to-back seasons, eliminating each other in consecutive seasons.

Samford knocked out the Bucs in 2016 with a 12-11 decision. Then, ETSU returned the favor last season with a 16-6 win to eliminate the Bulldogs and move on to the round before the championship.

The Bucs finished 3-1 against Samford last season, taking the series 2-1 in Johnson City before the tournament win in Greenville, S.C. Each regular season game between the two was decided by three runs or less.