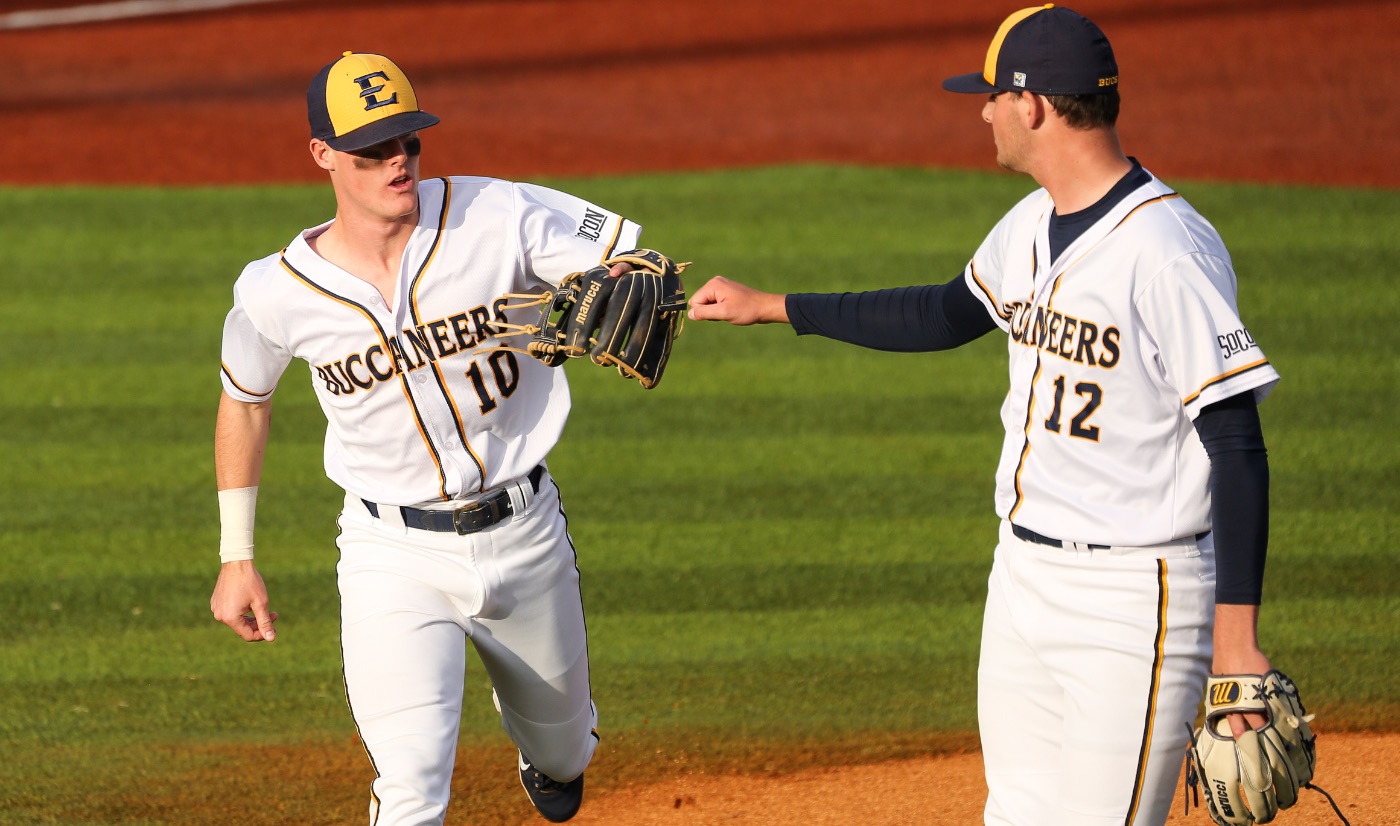 JOHNSON CITY, Tenn. (March 27, 2018) – The ETSU baseball team had a homecoming hit parade in its first game back in Thomas Stadium in 17 days, exploding its way to a 12-4 victory over I-26 rival UNC Asheville Tuesday night.

The Bucs matched season highs in runs and hits with its 12 run, 16 hit day against the Bulldogs. With the win, ETSU improves to 14-7 on the year, 6-1 in night games and 3-0 in midweek contests.

Sophomore Cade Gilbert (Ringgold, Ga.) turned in a career day to highlight the offense, driving in four RBI and smashing his first career home run. Gilbert drove in the first run of the contest with an RBI single in the second inning, then later brought home three with a rocket liner to the fans in left field lounge.

Joining the hit parade were seniors and Dobyns-Bennett alumni Chris Cook (Kingsport, Tenn.) and Christian Bailey (Kingsport, Tenn.) with two hits each. Bailey added an RBI while Cook brought home two on the day — including a homer in the sixth. Each added runs for ETSU.

Junior Daniel Sweeney (Johnson City, Tenn.) got the start in his hometown, turning in a career outing. He threw for five full innings, striking out seven hitters in the first three innings and finished with that amount. Both were career highs for the Science Hill graduate. He allowed two earned runs on three hits with just one walk, earning the win.

Four other pitchers saw a full-inning of work to close the contest, including sophomore Brock Beeler (Knoxville, Tenn.) making his first-career appearance as a pitcher. The outfielder threw a hitless inning, allowing just one walk before retiring the last three to close the inning.

Senior Logan Gentry (Kingsport, Tenn.) and Maher each threw a hitless inning for ETSU, while Dominick Stefanacci (Fort Myers, Fla.) allowed just one run in his with three hits, working out of a bases loaded jam to end the inning.

A three run inning in the second allowed ETSU to take an early lead, but UNC Asheville answered quickly with three of its own in the next frame. ETSU doubled up the Bulldogs in the fourth inning, taking a 6-3 lead that it would hold for good.

The Bucs jacked home five runs in the sixth, as Cook and Maher hit back-to-back solo dingers. After Bailey and Longley reached base, Gilbert smacked his three-run shot to make it a 11-3 ballgame. Both teams added runs in the final innings to end the scoring at 12-4.

The Bucs return to Thomas Stadium Thursday for its first home conference series, welcoming SoCon Media Favorite Mercer (19-6, 2-1) into town for a Thursday-Friday-Saturday series March 29-31. First pitch Thursday and Friday is set for 6:30 p.m., while Saturday’s finale begins at 1 p.m.