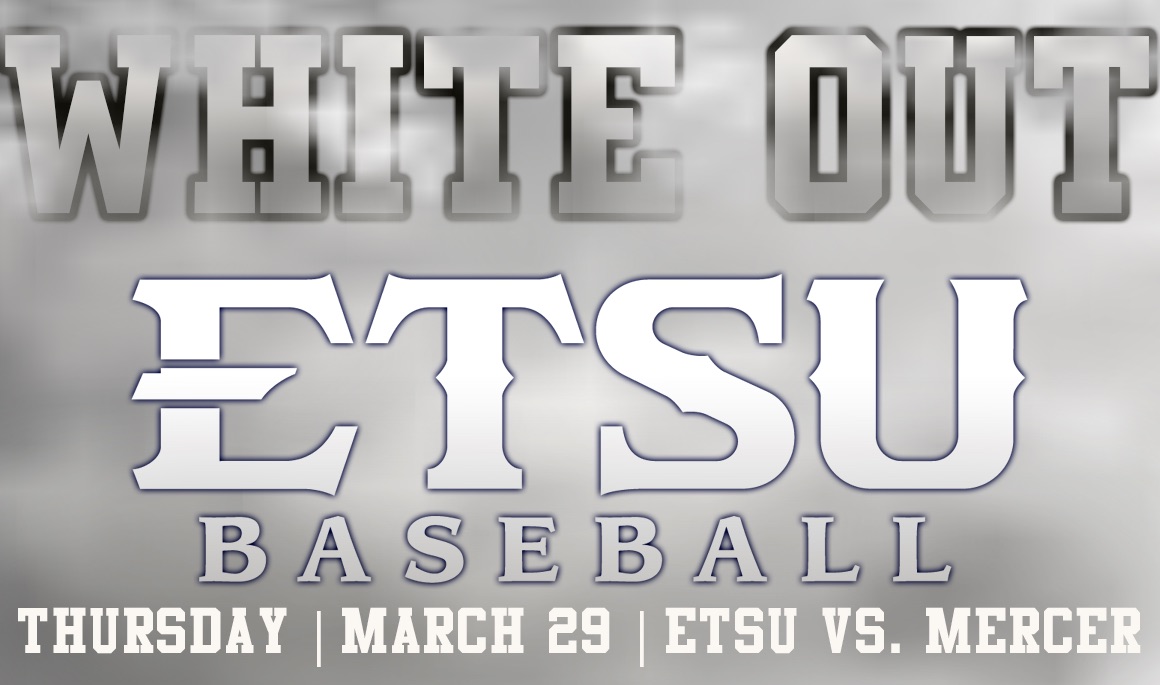 For the series opener Thursday night, fans are encouraged to wear white as part of ETSU’s whiteout promotion. After Saturday afternoon’s series finale, fans can join the Bucs on the baseball field immediately after the game for a special Easter egg hunt.

The Bears (20-6) and Bucs (14-7) are in the top half of the SoCon standings, as each have at least twice as many wins as losses this season. Each team won their opening series this weekend, as ETSU defeated Samford twice on the road while Mercer took two of three from Wofford in Macon.

All three games will be broadcasted on the SoCon Digital Network with play-by-play announcer Mike Gallagher on the call. Live stats will also be available for the contests.

Last night, the Bucs improved to 3-0 in midweek contests with a 12-4 win over UNC Asheville at Thomas Stadium. ETSU matched season highs with 16 hits and 12 runs in the win, adding the Bulldogs to its midweek wins over Tennessee and Eastern Kentucky.

Sophomore Cade Gilbert (Ringgold, Ga.) turned in a career day to highlight the offense, driving in four RBI and smashing his first career home run. Gilbert drove in the first run of the contest with an RBI single in the second inning, then later brought home three with a rocket liner to the fans in left field lounge.

Junior Daniel Sweeney (Johnson City, Tenn.) got the start in his hometown, turning in a career outing against UNC Asheville. He threw for five full innings, striking out seven hitters in the first three innings and finished with that amount. Both were career highs for the Science Hill graduate. He allowed two earned runs on three hits with just one walk, earning the win.

Last weekend, ETSU won its conference opening series against Samford last weekend in Birmingham, Ala. with a 7-4 win on Friday and a 2-1 win in the series finale Sunday. Samford took Game Two on Saturday afternoon, 6-2.

The series win marked the first for ETSU skipper Joe Pennucci, who is in his first season as a head coach.

Senior Caleb Longley (Cleveland, Tenn.) broke a 1-for-16 slump dating back two weeks in the game against Samford, returning to the lineup for the first time in three games to go 4-for-5 with a homer, two doubles and four RBI in the series opening win.

In the same game, freshman Ben Jackson (Guyton, Ga.) went 3-for-5 with a couple of RBI on a single. He also roped his first career double in the series finale and leads the Bucs with a .361 batting average and a .481 on-base percentage.

On the pitching side, ETSU found most of its success on Sunday. Starter Russell Koesters (Kingsport, Tenn.) picked up his first win of the season, throwing 4.1 innings and allowing just one run with four hits, one walk and two punchouts.

Senior Drew Korzybski (Knoxville, Tenn.) took over for Koesters and threw 3.2 hitless innings. He finished by allowing just two hits with no runs in 4.0 innings, one walk and two strikeouts for one of his career best long relief appearances.

Junior James Giambalvo (Alhambra, Calif.) had a noteworthy weekend as well, closing the door in the finale to earn the save. He also picked up his third win of the year in Game One to improve his record to 3-0. For the series, he threw 3.1 innings without allowing a hit, run or walk. Giambalvo now has an ERA of 1.62 through 16.2 innings.

A proven powerhouse in recent history, Mercer is one of five school in Division I that have won at least 35 games eight seasons in a row coming into 2018 — joining Florida State, Vanderbilt, LSU and Coastal Carolina on the prestigious list.

The Bears come into the weekend winning eight of their last nine games, including last night’s 13-4 win over Florida A&M. The 2018 SoCon media favorite has a 20-6 record and are 16-4 at home. Last season, Mercer finished 39-17 and won its third consecutive SoCon regular season title while returning 24 letter winners from that squad.

The team holds key victories over the likes of Georgia Tech, Kansas State and Kennesaw State. Common opponents between ETSU and Mercer exist, as the Bears dispatched UNC Asheville and Eastern Kentucky each in three-game series with sweeps.

Senior All-American catcher J.T. Thomas and senior outfielder Trey Truitt lead the high powered offense who ranks third in the NCAA in scoring. Truitt is batting among the conference leaders with a .396 average while ranking first in homers with nine. Thomas is hitting .340 with 21 RBI.

Five starters are hitting at least .300 thus far for Mercer and eight hitters have at least 19 RBI for the team, led by RJ Yeager with 24.

Through 45 all-time contests, Mercer holds a 30-15 advantage. The teams have met every season for at least three-game series since 2006 — both were members of either the A-SUN and SoCon at the same times in that span, meeting 41 of the 45 times the previous 11 seasons.

Although the teams have never met in SoCon postseason play, the Bucs and Bears faced off five times in ASUN tournament. Mercer took the first three, while ETSU took the final two in 2013 and 2014 — both team’s final seasons in the conference.

Mercer took last season’s series in Macon two games to one, as ETSU avoided the sweep with a 9-2 win led by Christian Bailey’s three-hit game. The last time the two squared off in Johnson City, Mercer swept the Bucs in three very close games, winning the games 7-5, 12-9 and 9-8.