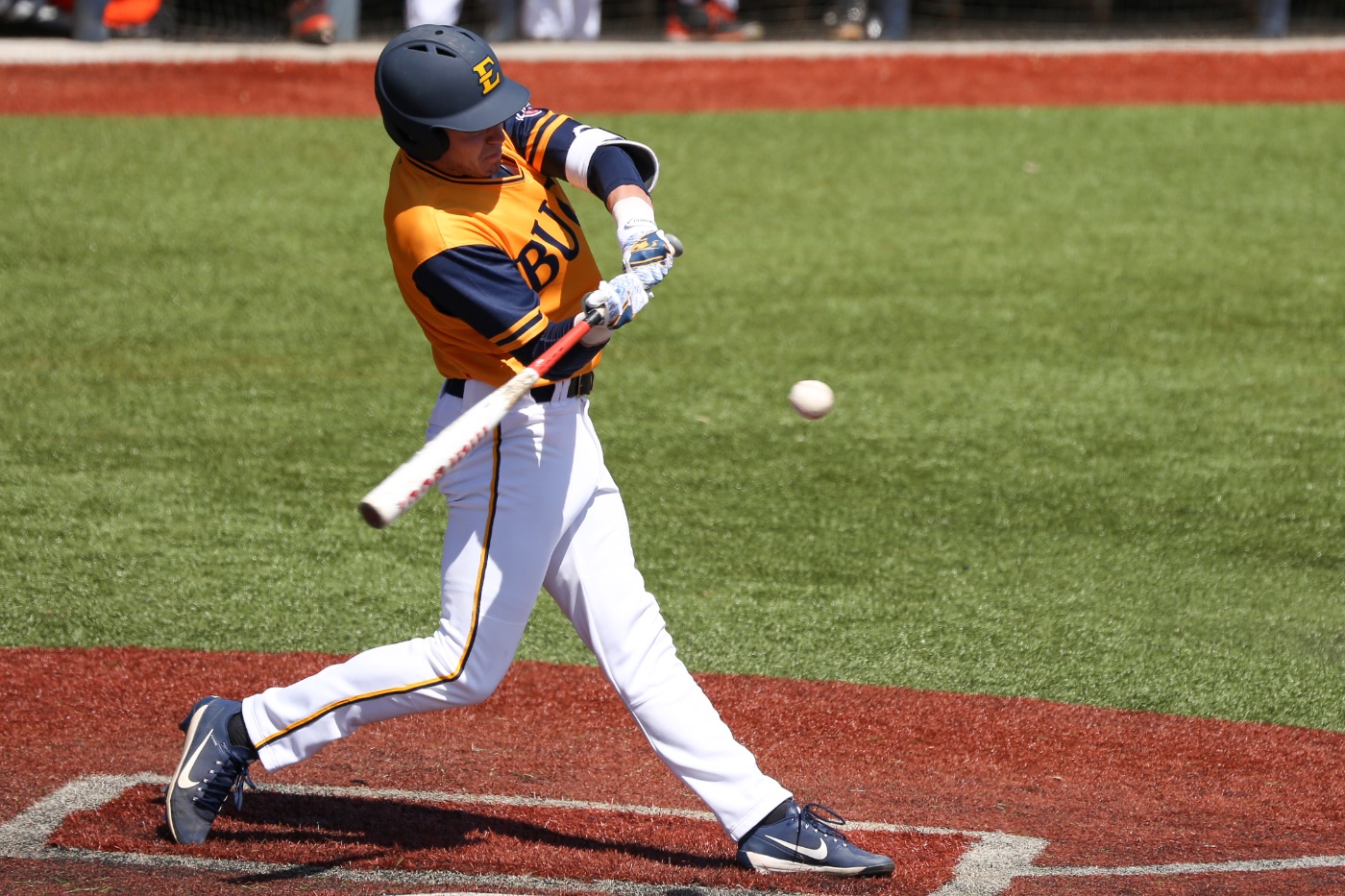 JOHNSON CITY, Tenn. (April 3, 2018) – Coming off a tough series against Mercer in Johnson City last weekend, the ETSU baseball team attempts to get back on track Wednesday night when it travels to Radford.

ETSU holds an undefeated 3-0 record in midweek contests so far, knocking off Eastern Kentucky 12-7 and UNC Asheville 12-4 at home while beating Tennessee in Knoxville, 9-6.

The Bucs suffered their first sweep since 2017 against a Mercer team that ranks in the NCAA statistical top 10 in scoring, runs, hits, batting average, on-base percentage, hit by pitch, home runs and strikeouts-per-nine innings for pitching.

Sweeney went 5.0 innings against UNC Asheville last Tuesday — his longest career start. He allowed three runs (two earned) with a career-high seven strikeouts and only one walk in getting the win.

Radford will not have a video stream, but live audio and live stats will be available at the links below:

Coming into this week, ETSU has four starters batting at least .300 and seven starters batting above .250. Freshman outfielder David Beam (Knoxville, Tenn.) is beginning to find a regular place in the lineup, adding to the offense with a .302 average in 13 starts and 17 appearances.

Senior Christian Bailey (Kingsport, Tenn.) is the catalyst for ETSU’s offense, leading the squad with a .333 average, 31 hits, nine doubles and 22 RBI. Fellow senior Caleb Longley (Cleveland, Tenn.) follows him in the meat of the order with 20 RBI, a team-high five homers and a team-leading .628 slugging percentage.

Making a recent move to the three-hole, senior shortstop Chris Cook (Kingsport, Tenn.) is batting .313 with 31 hits, five doubles and a couple of homers.

Along with Cook, two other key moves in the batting order is new leadoff man Aaron Maher (Brentwood, Tenn.), who is hitting .299 with four dingers and a team-high 21 runs. Freshman Ben Jackson (Guyton, Ga.) has started 21 games as a catcher/outfielder, leading ETSU with a .427 on-base percentage while batting an impressive .316.

On the mound, Friday starter Micah Kaczor (Tampa, Fla.) continues to lead the team with 48 strikeouts, while senior veteran Ryan Simpler (Lewes, Del.) has 46 and leads the team with 41.1 innings pitched.

Senior Russell Koesters (Kingsport, Tenn.) perhaps has seen the most success the last few weeks on the bump. In conference play against Samford and Mercer, Koesters tossed a combined 10.1 innings as the starter, coming out with a 1.74 ERA. He held Mercer’s explosive offense to one earned run through six full innings.

Out of the pen, junior James Giambalvo (Alhambra, Calif.) and senior Drew Korzybski (Knoxville, Tenn.) have proven to be reliable arms.

Despite allowing five unearned runs in his last outing against Mercer, Giambalvo continues to hold an impressive 1.93 ERA through 18.2 innings as ETSU’s closer.

Korzybski has two wins on the season and boasts a 3.04 ERA through 23.2 innings — the most innings among ETSU relievers. The Knoxville native had his career-best outing against Samford to open conference play two weeks ago, tossing 4.0 scoreless innings with just two hits allowed.

A new addition to the bullpen is sophomore Brock Beeler (Knoxville, Tenn.). The former ETSU football player and current back-up outfielder made his first career pitching appearances last week, tossing 2.0 no-hit innings. Coming in against Mercer with one on and nobody out, Beeler induced a double play before striking out the final out.

The Highlanders are 10-16 on the season and are off to a rough start in Big South Conference play, holding a 2-7 record against the likes of UNC Asheville, High Point and Gardner-Webb.

Despite the tough conference start, Radford has shined when it counts. The team has won two conference tournaments in the last three seasons, winning four straight games as the No. 5 seed in last season’s tournament. The team won 45 games in the 2015 season while also winning the Big South Championship.

Radford sports a roster with six seniors and 23 underclassmen. Redshirt junior outfielder Andrew Szamski leads the Highlanders with a .381/.454/.648 slash line and is ninth in the nation with four triples.

Sophomore first baseman Spencer Horwitz leads the team in runs scored (20) and RBI (20). He and Szamski each have four homers and eight doubles this season.

Radford’s pitching staff holds a combined 5.47 ERA through 26 games and have six pitchers with at least 23 innings pitched. Ryan Sande leads the team with a starter-low 3.90 ERA and 30.0 innings. The staff is nearly split with 11 right-handers and seven leftys.

The Bucs lead the all-time series 25-19 in what’s been a back-and-forth three decades.

The last meeting between the two took place last season in Johnson City, as the Bucs came out on top 8-5. The last meeting in Radford was earlier that season, concluding a seven-game road swing for ETSU with a 4-3 loss.

Furthermore, six of the last eight contests between the cross-state rivals have ended with a one-run margin or in extra innings.

The first matchup between the two squads took place in 1987 in a two-game series. Radford won the first game 8-3 while ETSU responded with offense in the second game, hitting its way to a 22-4 victory.