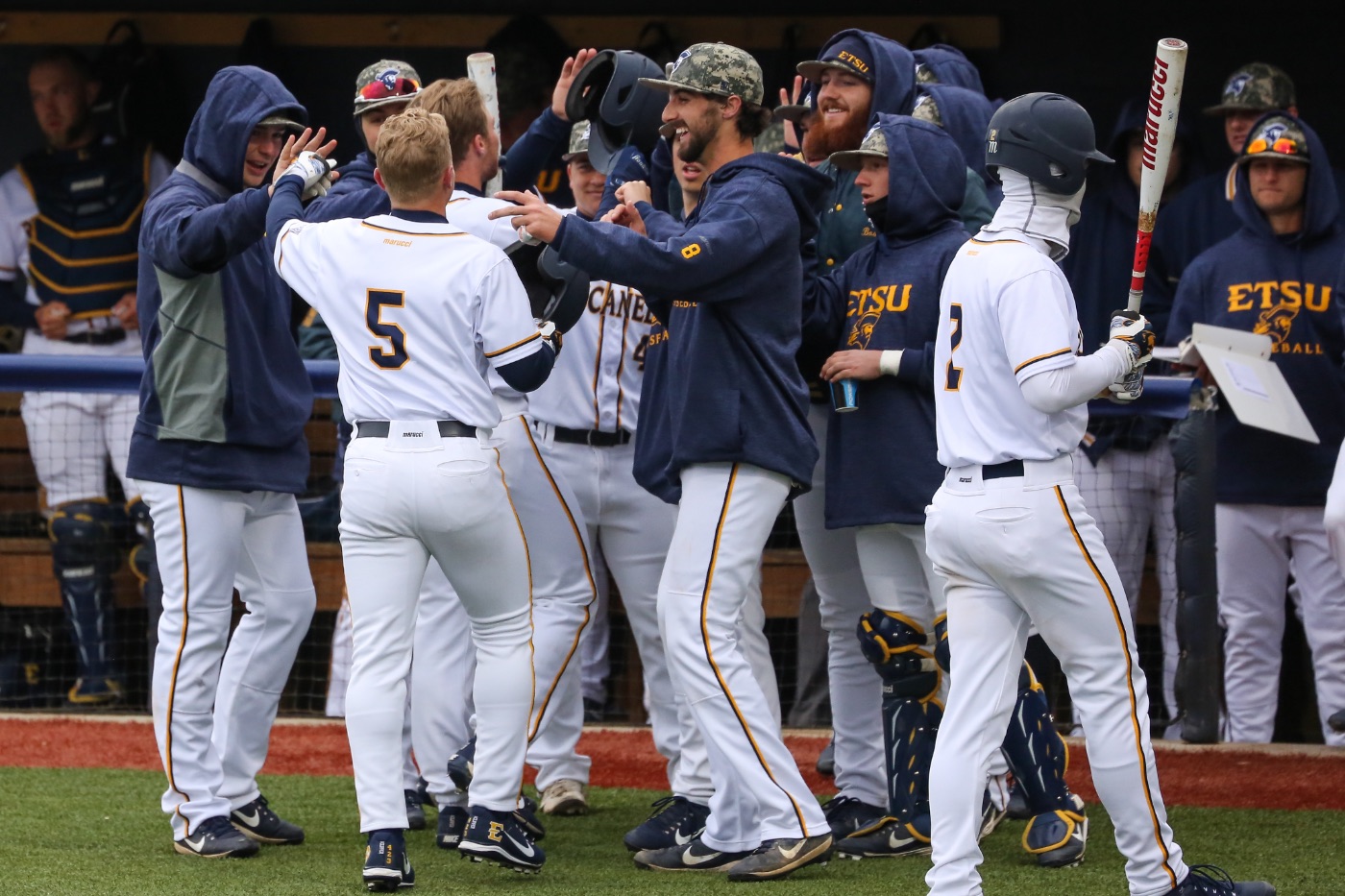 RADFORD, Va. (April 4, 2018) – With an early 7-0 lead through three innings, it appeared ETSU had full control in Radford Wednesday night. This would not be the case as a wild finish brought ETSU a clutch 9-8 win.

The Radford Highlanders matched the score with seven unanswered runs of their own in the middle innings. After each team scored a run in the seventh, the Bucs would plate the go-ahead run to win it in the eighth, pushing ETSU to the one-run victory.

Prior to the eighth, sophomore Carter Linton (Kingsport, Tenn.) entered a tie ball game with two runners on and two outs. He recorded the final out then later maintained ETSU’s lead with a one-two-three inning to pick up his first career win at ETSU.

Junior closer James Giambalvo (Alhambra, Calif.) entered in the ninth, closing things out to earn his third save of the year.

Arguably the biggest play was the final play with the tying and go-ahead runs on second and first base. First baseman Christian Bailey (Kingsport, Tenn.) used a hot glove to shoestring a low liner, tagging first in the same motion to double up Radford and end the game.

With the win, ETSU improves to 4-0 in midweek action and 15-10 overall. In the process, ETSU remedied a three-game losing skid from last weekend.

The Bucs also set a season high with four steals as a team, including two by Beam that caught Radford off guard before the pitch. Bailey and Smith also had a steal as ETSU worked the basepaths.

Fighting the heavy wind was not an easy task for either team, but Cook timed his swing and rode a homer to right center to give ETSU an early 2-0 lead in the opening frame.

Maher (Brentwood, Tenn.) extended the lead to 3-0 by driving home David Beam (Knoxville, Tenn.) with a deep RBI double to right center — perhaps prevented from being a homer by the inward-blowing wind.

Later in the inning, Beam stole his second base in two attempts on the day — both times catching the pitcher and defense off guard prior to the windup. While stealing third, a stray throw allowed Beam to come home.

On the very next pitch, Smith decided to steal third and slid in successfully. The catcher’s late throw sailed high and into the outfield, allowing Smith to score ETSU’s seventh unanswered run.

Radford surged back with four runs of its own in the bottom half, tallying its first five hits of the game to put a dent in the deficit. Despite an inherited run coming across, senior Logan Gentry (Kingsport, Tenn.) stopped the bleeding in relief, ending the inning with a bases loaded punch-out.

In the fifth, Radford surged back with three runs to tie the game — two of which were unearned thanks to a couple of throwing errors on a fielder’s choice play.

Senior Drew Korzybski (Knoxville, Tenn.) entered to give ETSU a fresh arm, recording the final out with the go-ahead run in scoring position.

Each team scored in the seventh inning, as a couple of dropped fly balls in right field allowed Beam to reach second and later to score off the bat of Hunter Parker (Chattanooga, Tenn.).

In the next half inning, Radford would score the equalizer on an infield fielding error. The ball would take a hop into left field, allowing a runner on second to advance home. This set up the close finish in the final two innings.

The Bucs will continue their week of facing Virginia teams when returning back home for a conference series against VMI at Thomas Stadium April 6-8.