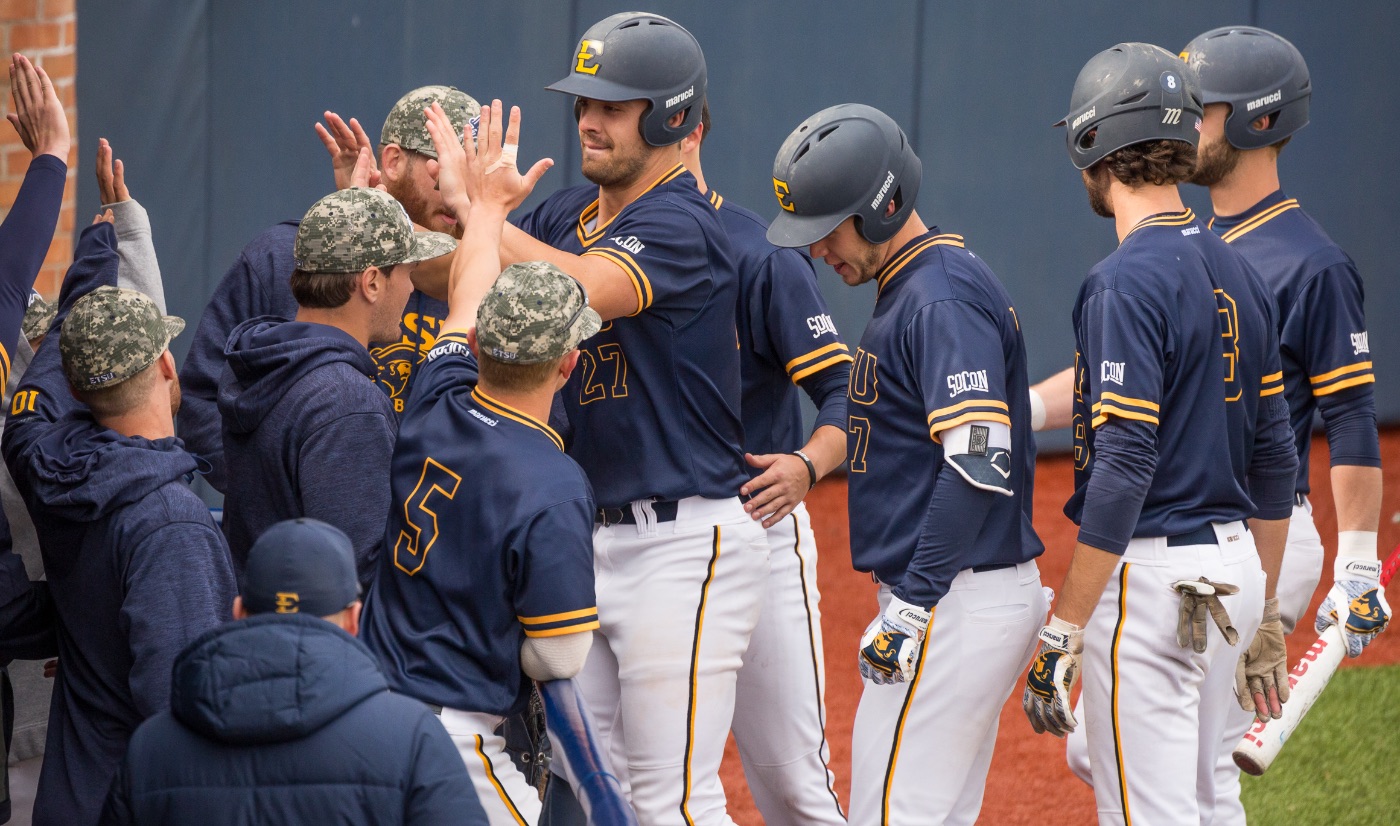 JOHNSON CITY, Tenn. (April 8, 2018) – After having nearly 48 hours to mull over an 8-7 loss in the series opener, the ETSU baseball team came into Sunday’s double header with a vengeance, taking the series with 6-4 and 7-3 wins Sunday afternoon.

With the home wins, the Bucs are now 5-1 in double-header games this season. ETSU also improved to 17-11 on the season and evened up VMI with a 4-5 conference record.

Furthermore, the Blue and Gold have won two of their three conference series so far.

After failing to cap a three run comeback in the series opener, ETSU remedied their previous efforts with five unanswered runs in the sixth and seventh inning to edge the Keydets 6-4.

The top four hitters in the order accounted for five of the six runs, including the tying run by cleanup hitter Caleb Longley (Cleveland, Tenn.). The tying and go-ahead runs came off a turning point two-out single by Hunter Parker (Chattanooga, Tenn.) in a 4-3 ball game. Ben Jackson (Guyton, Ga.) crossed to give ETSU the lead.

Making the stat sheet on both sides of the baseball, senior right fielder and left handed pitcher Aaron Maher (Brentwood, Tenn.) led the team with two runs as the leadoff hitter. He later came in to pitch for Simpler in the seventh and eighth innings, earning his fourth save by allowing no runs off one hit.

The Bucs struck first with a sacrifice fly by Chris Cook (Kingsport, Tenn.) to score Maher in the opening frame. This would be a sign of things to come, as the Bucs are 7-0 when scoring in the first inning and 13-0 when scoring first.

VMI would test that theory, rattling off four runs in the next three innings to put ETSU in a 4-1 hole. But another theory would hold strong in the sixth inning.

After holding VMI scoreless in the top half, ETSU stormed back with four runs of an RBI single by Longley, a sacrifice fly by Christian Bailey (Kingsport, Tenn.) and Parker’s two run base knock to give the team a 5-4 lead.

Through 28 games, ETSU has proven to be a sixth inning team by outscoring opponents 32-3 this season.

Longley would drive home his second RBI in the seventh inning for insurance, scoring Maher to cap the scoring and allow his senior teammate to close things out for the save.

The momentum would continue into the series finale as ETSU used more late surges to take a 7-3 win over the Keydets — winning the series in the process.

Eight of nine hitters in the ETSU lineup recorded at least one hit on the day, with Maher and freshman third baseman Sean Kearney (Powell, Tenn.) turning in two hit days. Kearney also led with a couple of RBI on a sac fly and a single for the night cap.

In this contest, VMI would draw first blood with an RBI double and a sacrifice fly to right field, taking an early 2-0 lead off starting pitcher Russell Koesters (Kingsport, Tenn.).

Koesters would recover nicely though after the two runs, finishing his day with 6.0 full innings and only four hits allowed. He struck out five batters in the process, hurling a career-high 109 pitches in his second win of the season.

The Bucs would put Koesters in that position in the fourth and fifth innings, as Cade Gilbert (Ringgold, Ga.) began a rally for the Bucs with single that bounced off the third baseman’s glove into right field to score Cook. Later, ETSU tied it Kearney’s sac fly to bring in Longley.

With the game tied at two, Maher jacked his fifth homer of the season into the right field tree line to leadoff the fifth and give ETSU the 3-2 lead. Maher’s homer was on the very first pitch of the inning.

Following him in the two-hole, David Beam (Knoxville, Tenn.) attempted to match Maher’s homer, but settled for a double off the right field wall. He would later score the fourth run off Longley’s sac fly. Longley was the only Buc starter not to record a hit in the contest, but did drive in a run, score a run and draw a walk in two official at-bats.

Kearney would extend the lead in the super sixth inning with a single up the middle, plating Parker. Jackson Greer (Knoxville, Tenn.) sealed VMI’s fate with a deep two-run homer to left center. VMI would add a ninth inning run, but ultimately fell in the 7-3 loss.

Up next for ETSU is Eastern Kentucky April 10 at 4 p.m., kicking off a four-game road swing. ETSU will then ship over to Greensboro to face UNCG April 13-15 in conference action before returning to Thomas Stadium April 17 to host Tennessee.