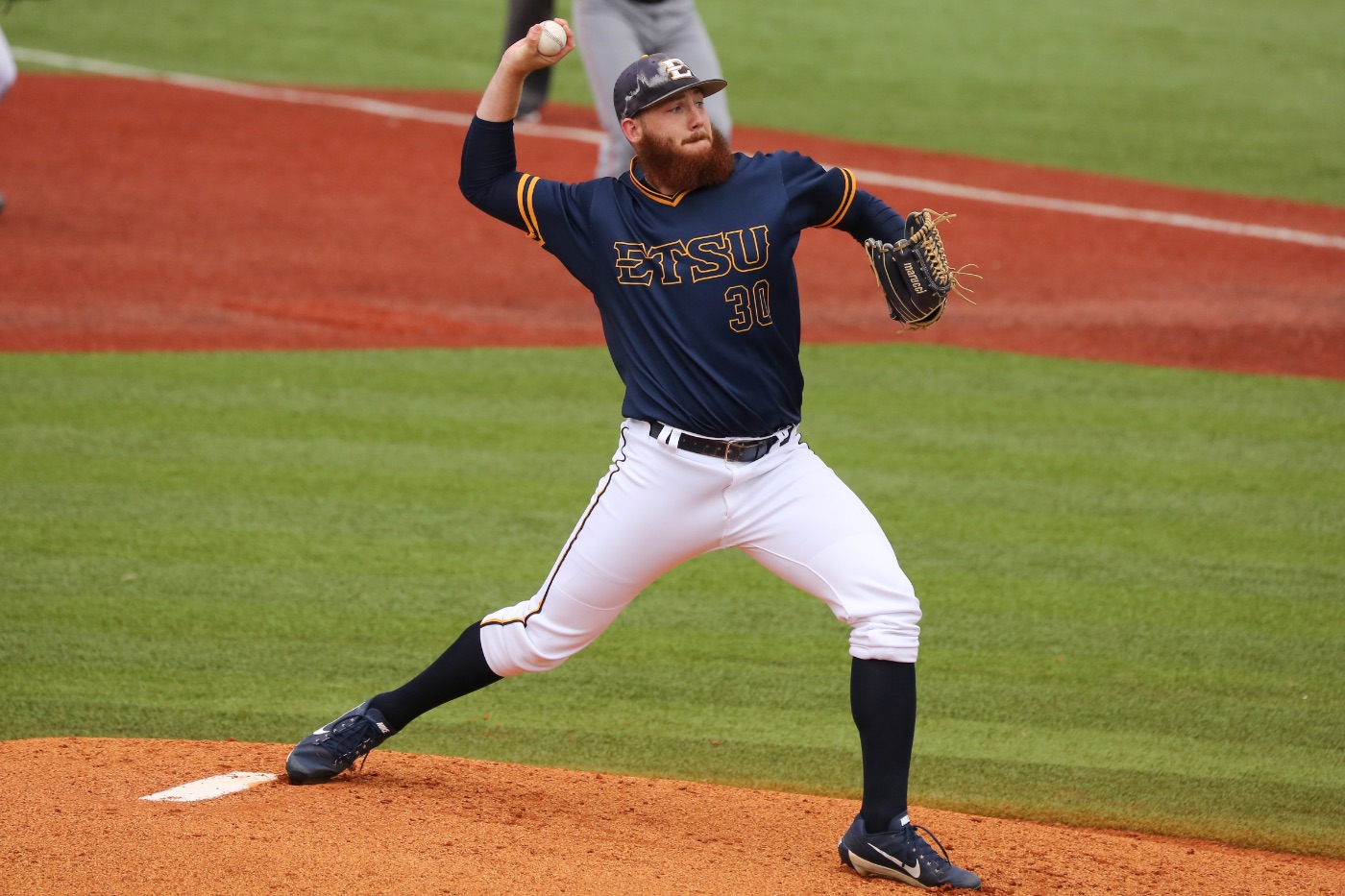 ETSU evens series with 8-5 win, stumbles in the rubber match

ETSU handed the Spartans its second loss in conference play this season, bumping UNCG out of first place with Samford’s win over Mercer. ETSU moves to an 18-14 overall record and a 5-7 mark in conference play.

Simpler finished today’s contest with 7.2 innings — just shy of his season-high of 8.0. Without any walks, the veteran struck out 10 hitters and allowed just three runs. He allowed eight hits, four of which came in his final inning.

The offense produced for Simpler, reaching at least one base runner in every inning. ETSU finished with nine hits and had 13 base runners reach in other ways — seven walks, three hit batters and three errors.

Senior Christian Bailey (Kingsport, Tenn.) followed Longley with a single through the right side, bringing him home from second for the early 2-0 lead. ETSU improved to 9-0 when scoring in the first inning and 14-1 when scoring first.

After UNCG hit a solo homer to make it 2-1, ETSU would answer with five unanswered runs. After David Beam (Knoxville, Tenn.) crossed with heads up base running on a fielding error, ETSU rattled off a four run seventh inning.

In the seventh, all five of the “Cinco C’s” contributed either a run or an RBI to extend the lead. Caleb Longley and Christian Bailey each had an RBI open the inning, then Cullen Smith (Lebanon, Tenn.) joined the duo with a bases loaded walk, scoring Cook. Cade Gilbert (Ringgold, Ga.) made it 7-1 with his first of two sacrifice flyouts, scoring Bailey.

UNCG attempted to surge back with a two run, four hit eighth inning, breaking up Simpler’s 16 consecutive out streak. Senior Aaron Maher (Brentwood, Tenn.) would then enter to close in a save situation, recording a three pitch strikeout to end the frame.

After ETSU added an insurance run in the ninth with Gilbert’s second sacrifice fly, UNCG would attempt to rally. The Spartans opened with a two run homer to make the game close at 8-5, but Maher would buckle down and record the final three outs to secure the win.

The Spartans came out swinging in the nightcap, striking back with five unanswered runs in the early going to spark a 12-3 victory.

In the loss, eight of ETSU's nine starters would record at least one hit — led by two from Cook.

UNCG would go on to add seven more runs in the fifth inning, knocking the wind out of ETSU with seven hits in the rally.

With a 12-0 deficit, ETSU attempted to rally of its own in the sixth inning — an inning where the Bucs are now outscoring opponents 36-4 this season.

Cook would add another run for the Blue and Gold, driving home Greer with ETSU’s fourth hit of the inning. UNCG would then pick up the final out to leave two ETSU runners on base.

Entering with a 12-3 deficit, junior Dominick Stefanacci (Fort Myers, Fla.) threw three scoreless innings for his best outing as a Buccaneer — allowing one hit with three strikeouts to finish the game.

Despite the loss, ETSU continued its streak of reaching at least one base runner in every inning all the way through sixth, ending with 15 in a row over both games before UNCG cracked the code for the final three.

Up next for the Bucs is the season series finale against Tennessee inside Thomas Stadium at 6:30 p.m. ETSU has won both games against the Vols this season in Knoxville.

Tickets are limited for Tuesday night’s contest, as only 150 student tickets will be allotted and are available for pickup at the Culp Center on campus. The first 300 fans to the park will receive custom ETSU shades.