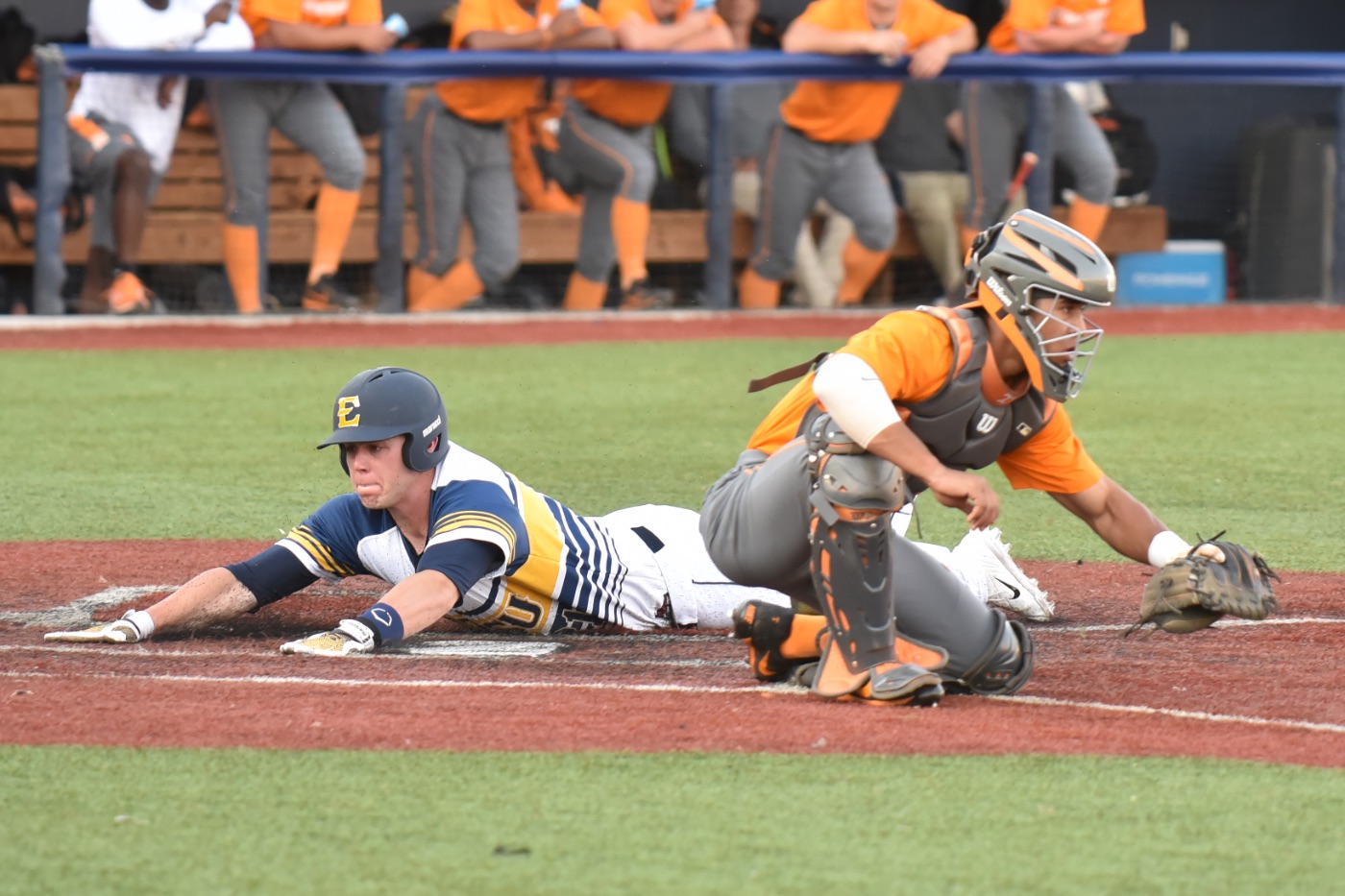 First pitch vs. Tennessee set for 6:30 p.m. inside Thomas Stadium

With a win tomorrow, ETSU would own three victories over the Vols this season, marking the first time either team has won three games over the other in a single season.

The game will be ETSU’s Blue-Out presented by Alumni Hall, as Buc fans are encouraged to wear their best blue Buccaneer attire and override the orange at Thomas Stadium.

Tennessee will look to avoid the sweep with 10-9 and 9-6 losses to the Bucs in Knoxville earlier this year. The Vols will also look to avoid back-to-back losses in Johnson City, falling to ETSU 10-2 last season.

ETSU has not announced its starting pitcher, but junior Daniel Sweeney (Johnson City, Tenn.) has taken the bump for the last five midweek starts. Sweeney is 1-0 this year and is one of two known pitchers in the nation to throw an immaculate inning — three strikeouts on nine pitches.

The game will be streamed on the SoCon Digital Network with play-by-play announcer Mike Gallagher and color analyst Bruce Tranbarger on the call. Live stats will also be available for the contest.

Tickets are still available for purchase. Follow the link below to get yours today for as low as $10.

For Video: check back tomorrow on ETSUBucs.com or on the SoCon Digital Network

The Blue and Gold come into tomorrow’s contest 18-14 on the season and had yet to fall below .500. ETSU fell to Eastern Kentucky on the road in a revenge match last week before taking one of three at UNCG in Greensboro.

ETSU is in the middle of the SoCon race with a 5-7 record, but will take a one-week hiatus from conference play when it travels to New Orleans to face Tulane this weekend.

Senior shortstop Chris Cook (Kingsport, Tenn.) is the player to watch Tuesday night, as he leads the team with a .328 batting average, 42 hits and 26 runs. This season against Tennessee, Cook is hitting 6-for-11 with three RBI.

Sophomore catcher Jackson Greer (Knoxville, Tenn.) has had his hometown schools number the last two games, totaling a single, a double, a homer run and four RBI against the Vols this year.

ETSU has three players batting above .300 as Christian Bailey (Kingsport, Tenn.) and Caleb Longley (Cleveland, Tenn.) continue to swing a solid bat. Each have a team-high 27 RBI and 12 doubles. Longley leads the Bucs with six dingers on the year.

New leadoff man Aaron Maher (Brentwood, Tenn.) is not far behind with a .292 average. The senior right fielder has five homers, 25 runs and 23 RBI and also picked up his fifth save this season on the mound.

Freshman outfielder David Beam (Knoxville, Tenn.) has now become a regular in the lineup as the only ETSU player to man all three outfield positions. He’s now batting .275 with a team-high .427 on-base percentage.

Senior pinch hitter Ethan Rice (Erwin, Tenn.) had one chance to make an impact against Tennessee, and he did. In his only at-bat against Tennessee, Rice doubled home the go-ahead run and later scored an insurance run to help ETSU win 10-9 in Knoxville.

On the pitching side, ETSU’s Ryan Simpler (Lewes, Del.) has back-to-back quality start wins after defeating VMI at home and UNCG on the road. He retired 16 straight hitters against a nationally ranked offense in UNCG, allowing three earned runs with 10 punch outs and no walks.

The ETSU weekend starters will most likely have the night off against Tennessee, but the bullpen will pick up the workload. Nine different pitchers have seen action against the Vols this year.

Junior closer James Giambalvo (Alhambra, Calif.) did not appear last weekend, as Maher got the call out of the pen in last week’s only save situation. Giambalvo has a 2.01 ERA through 13 appearances with four saves — just one short of Maher’s five.

Senior reliever Drew Korzybski (Knoxville, Tenn.) has thrown 28.2 innings and brings a 4.40 ERA into Tuesday’s contest. The senior owns a save against his hometown foes, as he has thrown in both games against the Vols.

The Vols are 21-17 on the season and are 5-8 in road contests. The Vols have faced stiff competition the last two weeks, suffering a sweep on the road against No. 19 LSU this past weekend.

Prior to LSU, Tennessee had three straight wins — two over UT-Martin and one against No. 1 Florida in the series finale.

In the last contest with the Bucs, Tennessee started freshman Sean Hunley on the mound. Hunley has a 1.57 ERA and is 6-0 in eight starts this season with one of his no decisions coming in the loss to ETSU. He had a scoreless streak of over 20 innings snapped by ETSU last month.

Power bats Andre Lipcius and Benito Santiago continue to charge the Volunteer offense, as Lipcius went 3-for-4 against ETSU with two homers in game one. He currently leads with 29 RBI, while Santiago leads the Vols with 13 doubles and five homers.

Justin Ammons is batting .312 this season and holds an on base percentage of .421 — both team highs for Tennessee. Fellow speedster Jay Charleston is another threat on the base paths, as he is a perfect 13-for-13 in stolen base attempts.

Despite the Bucs winning the last two, the Vols lead the all time series with ETSU 64-19.