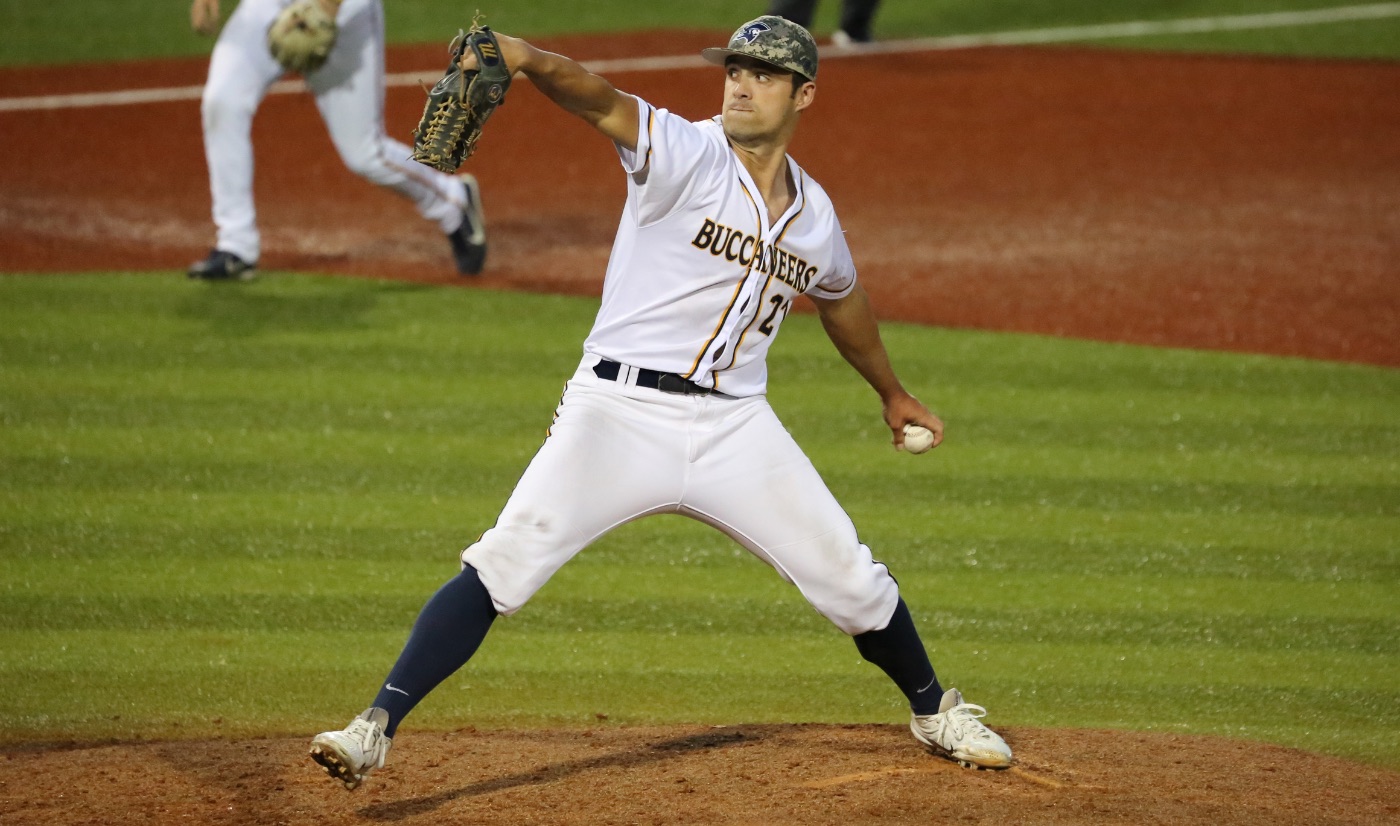 Aaron Maher finished a two-hit shutout for ETSU en route to a 2-0 victory. Maher added two hits in the batter's box and scored both of ETSU's runs.
ETSU pitchers toss shutout to down Radford
Radford at ETSU | April 25, 2018
Related Links

Seven pitchers made an appearance for the Blue and Gold and held Radford to a season-low two hits on the day. Junior Daniel Sweeney (Johnson City, Tenn.) earned the win on a two-inning limit while senior Aaron Maher (Brentwood, Tenn.) closed with his sixth save of the year in as many tries.

Maher’s production did not stop on the mound, as ETSU’s normal right fielder had a two-hit day and scored both of ETSU’s runs. After a leadoff single in the first, Maher advanced to second on a wild pitch and later stole third with nobody out.

The game remained scoreless all the way until the eighth inning, as Maher hammered a solo shot to right-center field to extend the lead, 2-0. The senior would touch home and immediately head to the bullpen to warm up before coming in for the save.

In between Sweeney and Maher were five other arms for ETSU, as seniors Russell Koesters (Kingsport, Tenn.) and Drew Korzybski (Knoxville, Tenn.) each tossed smooth innings in the third and fourth, respectively.

Fellow senior Logan Gentry (Kingsport, Tenn.) would be the only other pitcher besides Sweeney to pitch two innings, allowing no hits with a strikeout against his six batters.

Prior to Maher, junior transfers Dominick Stefanacci (Fort Myers, Fla.) and James Giambalvo (Alhambra, Calif.) each saw an inning of work with neither allowing a hit. Stefanacci struck out one, while Giambalvo recorded two in his frame.

The shutout was ETSU’s first of the season, last doing so in 2017 with Ryan Simpler (Lewes, Del.) tossing a complete game shutout win over UNCG.

The Bucs finished with six hits on the day, including two from freshman Ben Jackson (Guyton, Ga.). Sophomore Jackson Greer (Knoxville, Tenn.) contributed a late double while Longley added a base knock to his sacrifice fly.

ETSU will resume conference play and head to Cullowhee, N.C. this weekend to take on Western Carolina April 27-29. First pitch Friday is scheduled for 5 p.m.