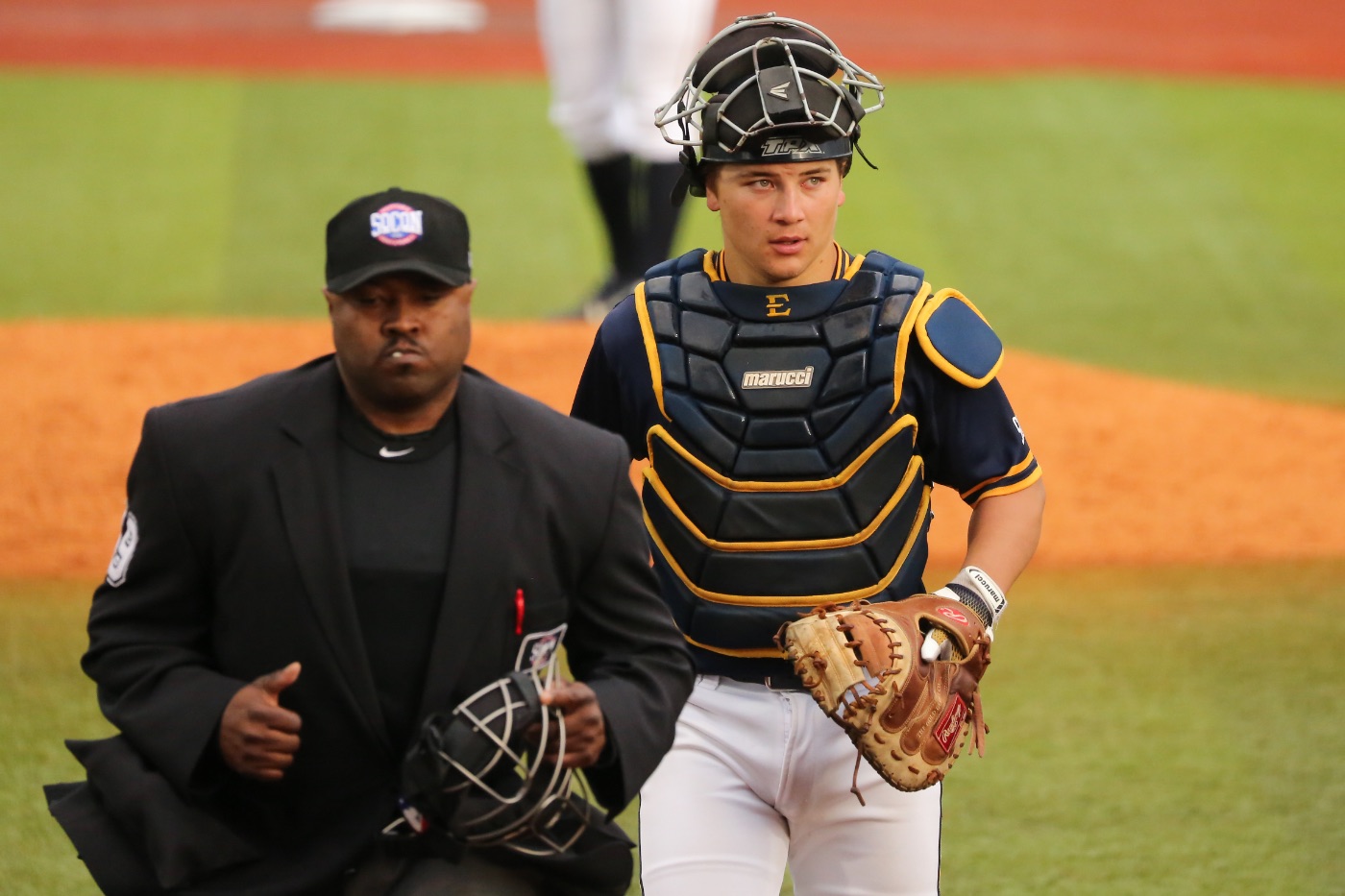 CULLOWHEE, N.C. (April 27, 2018) – ETSU baseball strung together 13 early runs in its hottest start of the season. It proved to be just enough, as the Bucs held on for a 14-12 victory over Western Carolina to clinch the series Saturday afternoon.

The Buccaneer offense scored five runs in the opening frame and followed with four runs each in the second and third innings. In that first inning, the first eight batters all reached base for ETSU.

With an early 13-1 lead, ETSU looked to be cruising before Western Carolina began to slowly rally. The Catamounts answered in the bottom of the third with three runs. After adding four more runs in the middle innings while holding ETSU hitless, WCU put the pressure on.

A four-run eighth inning pulled the Catamounts within a run at 13-12 heading to the ninth. Freshman Ben Jackson (Guyton, Ga.) swung momentum back in ETSU’s favor with a deep solo homer to left field.

“It was by far the biggest hit of my career,” Jackson said. “The pitcher made a mistake and left one hanging, and I capitalized on it. It was a huge moment and a great win for our team.”

Junior James Giambalvo (Alhambra, Calif.) entered to close with a two run lead. WCU’s Matthew Koehler hit a two-out triple to keep his team alive, but Giambalvo shut the door with a strikeout to end the game with the tying run at the plate. He now had five saves this year.

ETSU matched a season-high with 16 hits on the day while setting a new mark in runs with 14. The 13 run outburst in the first three innings surpassed ETSU’s previous season-high of 12 runs.

The Blue and Gold compiled 15 hits in the first three innings, with the top of the order going 9-for-9 in their first three at-bats. The trio of senior Aaron Maher (Brentwood, Tenn.), Jackson and senior Chris Cook (Kingsport, Tenn.) accounted for 10 runs, including nine in the first three frames.

Jackson finished 4-for-6 with three singles, a homer, four runs and an RBI to lead the way. Maher and Cook each had three hit days, with Cook driving home four runs.

Furthermore, Cook recorded career-hit No. 283 in his third at-bat, moving him into third place on the ETSU career hit list ahead of Andrew Green (2010-13).

Bailey and sophomore Cullen Smith (Lebanon, Tenn.) each had two-hit days for ETSU. Smith drove in three runs on the day, while Bailey brought home a pair.

Senior Caleb Longley (Cleveland, Tenn.) had a two-run homer in the second inning, giving him four long-balls in the last five contests. He now has 10 for the season.

Fellow senior Hunter Parker (Chattanooga, Tenn.) added a key hit in the first inning, singling through the right side to bring home two more runs for the Bucs. Parker marked the eighth straight runner to reach base for ETSU in the frame.

On the mound, senior Ryan Simpler (Lewes, Del.) tossed six innings to earn his fifth win of the season. Junior Dominick Stefanacci (Fort Myers, Fla.) and senior Drew Korzybski (Knoxville, Tenn.) would later come in relief and help keep ETSU ahead prior to the ninth.

Winners of its last three games, ETSU improves to 22-17 on the season and evens its Southern Conference record to 7-7.

The Bucs will look for their first sweep since Winthrop last month in Sunday’s contest, which is slated to start at 1 p.m. at Hennon Stadium.