Baseball
Baseball
The Citadel at ETSU | May 03, 2018
BoxscorePlay-by-Play 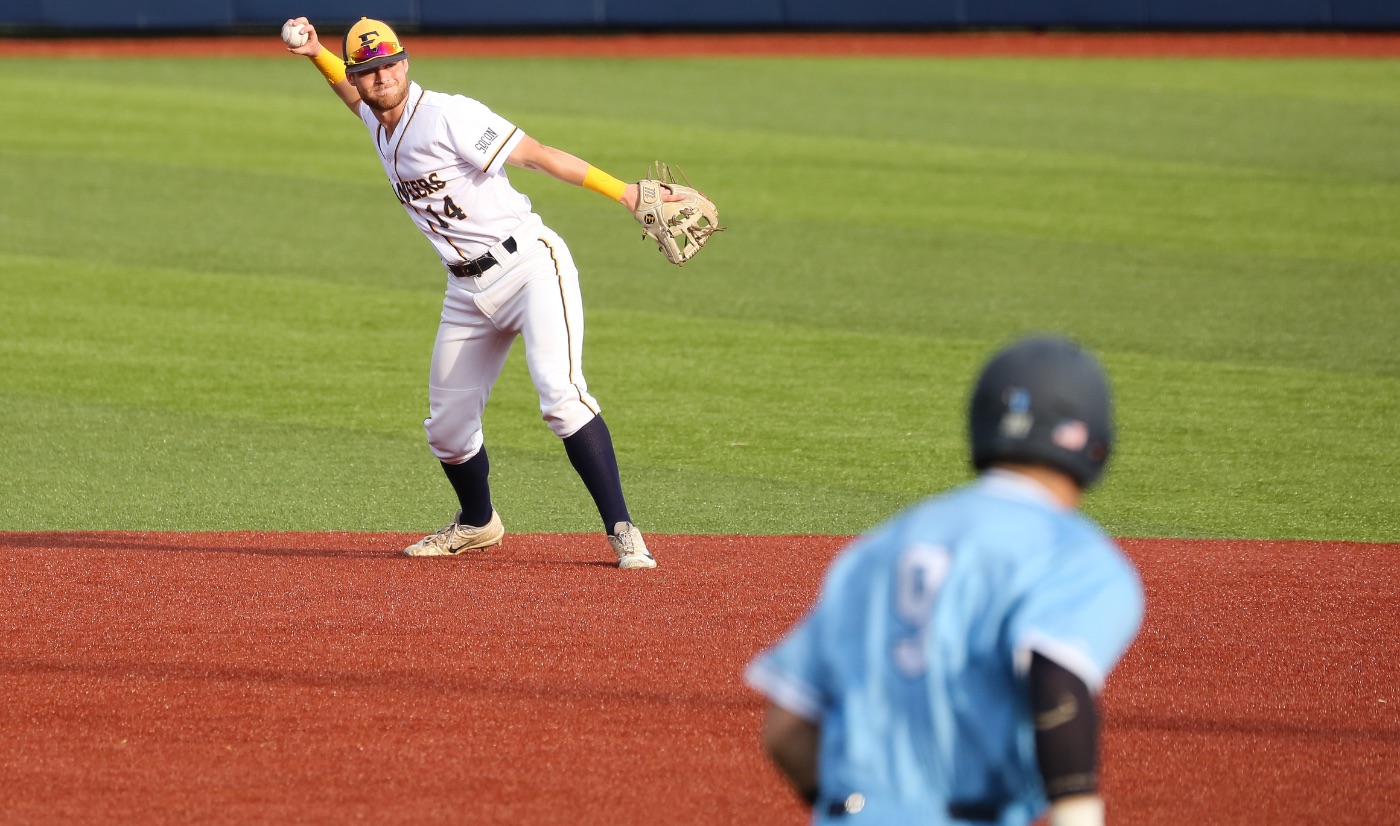 Sophomore Cullen Smith records one of his six assists vs. The Citadel Thursday night. Smith finished with three hits, including his 100th career hit.
Bucs drop series opener in extras to The Citadel
The Citadel at ETSU | May 03, 2018
Related Links

JOHNSON CITY, Tenn. (May 3, 2018) – For the first time since 2001, The Citadel knocked off ETSU in Johnson City as the Bulldogs edged the Bucs 6-5 in extra innings during Thursday night’s series opener.

ETSU rode an eight-game home win streak over the Bulldogs into Thursday’s contest, but failed to capitalize on a walk-off opportunity in the ninth inning. An RBI single by Ryan McCarthy in the 10th netted the go-ahead run for the Bulldogs.

The sophomore duo of Cullen Smith (Lebanon, Tenn.) and Jackson Greer (Knoxville, Tenn.) each had multi-hit games for the Bucs and combined for five of ETSU’s nine hits on the day.

Smith had three hits — including a ground-rule double — a walk, a run and an RBI while tallying his 100th career hit at ETSU. Greer added two doubles to complete his day, as ETSU finished with five two-baggers as a team to tie a 2018 game-high set last week at Western Carolina.

After a solo homer by McCarthy gave The Citadel an early lead in the second inning, ETSU immediately answered with a couple of runs.

After a two-out error allowed Smith to score and keep the inning alive, sophomore Cade Gilbert (Ringgold, Ga.) ripped the first pitch of his at-bat through the left side, scoring David Beam (Knoxville, Tenn.) for the go-ahead run.

The Bulldogs tied the game with a second solo homer, but ETSU then began a three run inning in the third to take a 5-2 lead. Back-to-back doubles by Ben Jackson (Guyton, Ga.) and Caleb Longley (Cleveland, Tenn.) scored Jackson to regain the lead at 3-2.

In the following at-bat, senior Christian Bailey (Kingsport, Tenn.) reached on an infield single and later advanced to second on a throwing error, allowing the Bucs to double their lead with Longley coming home.

Smith would then single up the middle to bring home Bailey and extend the lead to 5-2. This single marked career hit No. 100 for the Lebanon native.

The Citadel would then string together a three-run inning to tie the game at five runs apiece. Both teams would go scoreless for the remainder of regulation.

The Bucs reached at least one runner in scoring position in five straight innings after the third, but could not regain the lead.

Despite picking up the decision, senior reliever Drew Korzybski (Knoxville, Tenn.) worked a strong outing. The Knoxville native allowed just one run through five innings of work, scattering six hits and four strikeouts in his relief effort to maintain a tie ballgame.

The Bucs will look to even the series up Friday night at 6:30 p.m. inside Thomas Stadium. Senior Ryan Simpler (Lewes, Del.) will get the nod to pitch tomorrow night’s contest.