Baseball
Baseball
The Citadel at ETSU | May 06, 2018
BoxscorePlay-by-Play 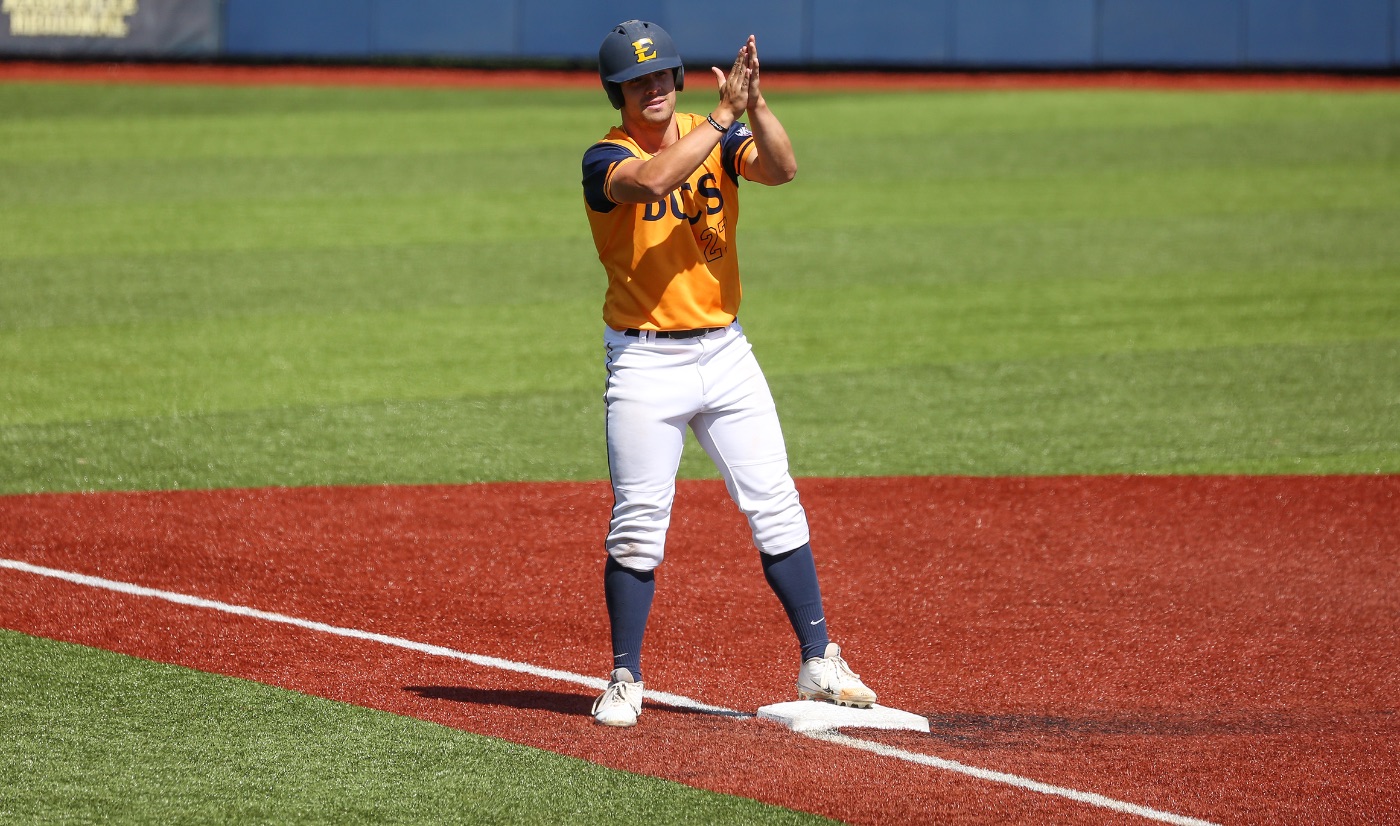 Senior Aaron Maher celebrates a bases-loaded triple vs. The Citadel Sunday afternoon. Maher went 3-for-4 with four RBI in Sunday's finale.
ETSU offense erupts in 11-5 win vs. The Citadel
The Citadel at ETSU | May 06, 2018
Related Links

JOHNSON CITY, Tenn. (May 6, 2018) – Forced to make adjustments to its lineup Sunday afternoon, the ETSU baseball team made the most of its opportunities en route to an 11-5 win over The Citadel in the series finale at Thomas Stadium.

Coming off two losses to the Bulldogs and having key players out with injuries, ETSU (24-19, 9-9 SoCon) shook up its roster and managed to put together two four-run innings in the first and last offensive innings to gain momentum and earn the victory.

The senior duo of Chris Cook (Kingsport, Tenn.) and Aaron Maher (Brentwood, Tenn.) each turned in three-hit games for ETSU and combined for six RBI on the day.

With three hits on the day, Cook earned his 290th career hit to tie himself for second on the all-time list with Shane Byrne (2003-06).

Maher — who started his first career game on the mound today — served as the team’s DH for the first time this year and spent ETSU’s first inning pitching. Maher drove in four runs at the plate, including an RBI triple in the eighth inning to drive home three runs.

Junior Daniel Sweeney (Johnson City, Tenn.) earned his first career save, finishing out the final 3.1 innings only allowing a solo homer in an otherwise scoreless and hitless outing.

Back at the plate, the speedy outfield duo of freshman David Beam (Knoxville, Tenn.) and senior Hunter Parker (Chattanooga, Tenn.) each had two hits today. For Parker, his sixth inning RBI base knock added him to the 100 career hit club.

Trailing 1-0 early in the contest after Maher worked out of a bases loaded jam, ETSU fired up the home crowd and capitalized on its momentum with a four-run inning. After Beam’s leadoff single, Cook doubled him home to immediately tie the game at 1-1.

Later in the inning, sophomore Cullen Smith (Lebanon, Tenn.) would pop a sac fly to score Cook and give ETSU the 2-1 lead. Following Smith, Maher doubled home another run and freshman Sean Kearney (Powell, Tenn.) would add one more with an RBI groundout.

The Bucs cruised a steady pace, adding solo runs in the third, fourth and sixth innings to answer three Bulldog scores — including a two-run sixth inning to pull The Citadel within two at 6-4.

In the bottom of the sixth, senior Ethan Rice (Erwin, Tenn.), earning his first start of the series in left field, drilled a lead-off triple for his team-leading second of the season. Parker would bloop him home with a single over the infield.

The Citadel would answer with an eighth inning solo shot to make it 7-5, but the Bucs powered away in the eighth to add four runs of insurance — three of which came off Maher’s bases loaded triple. The other run came prior to Maher via an RBI single by Cook.

Sweeney — ETSU’s go-to option for midweek starts — finished the job in the ninth, picking up his first career save in a rare relief opportunity.

Defensively, sophomore Jackson Greer (Knoxville, Tenn.) caught all three games behind the dish gunned down runners in all three games. Greer threw out a remarkable six out of seven runners in stolen base attempts to limit The Citadel’s scoring position situations.

Next week, ETSU will hit the road for midweek action in Charleston, West Virginia to take on Marshall at an off-campus location. First pitch is set for 7:30 p.m.

The Bucs will then return home for SoCon play to take on Furman, beginning Friday, May 11 at 6:00 p.m.