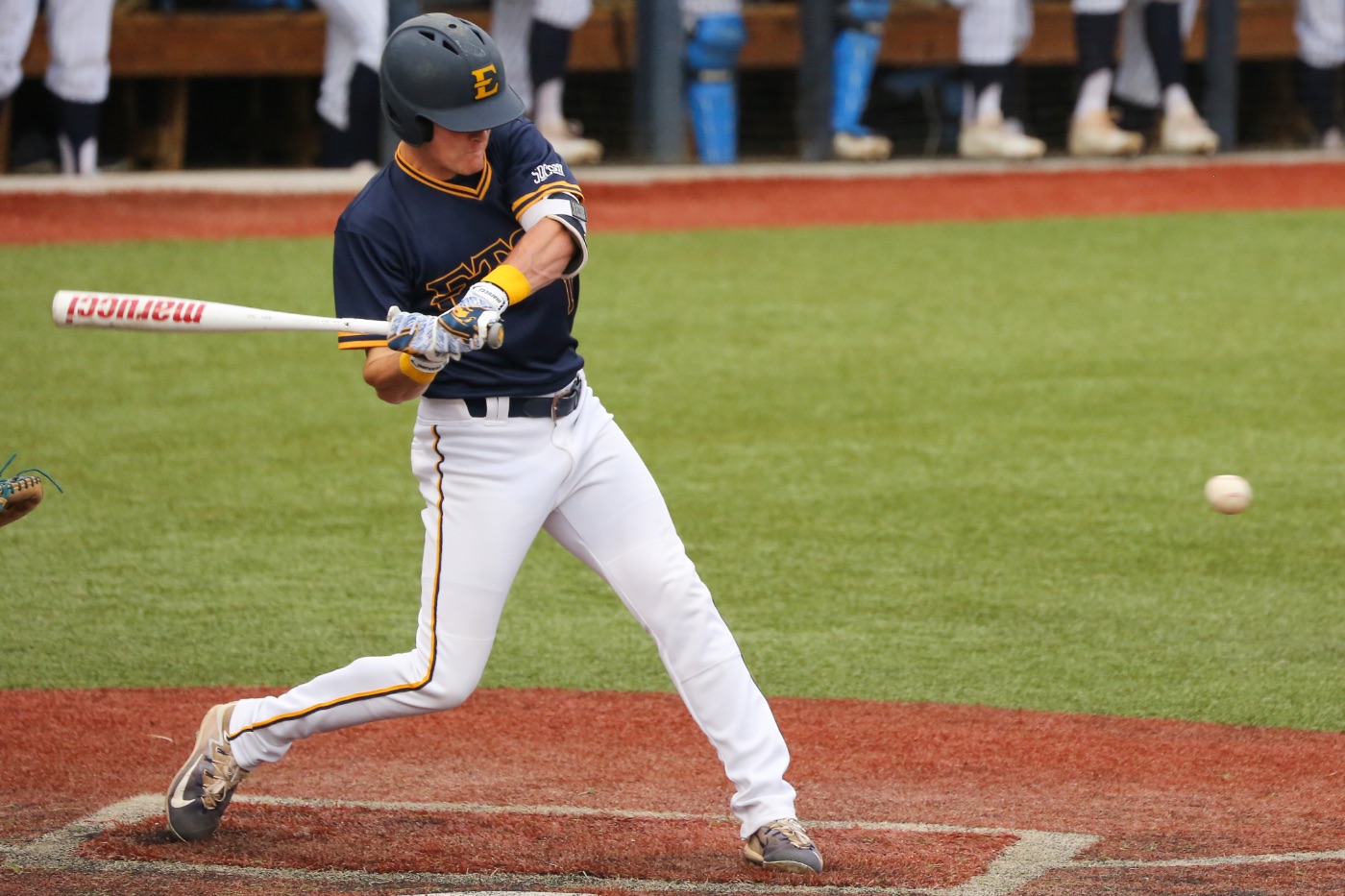 Senior Chris Cook (Kingsport, Tenn.) finished 2-for-5 with a double and a two-run homer to open up ETSU’s scoring, accounting for five of ETSU’s eight scores with three runs and two RBI.

With today’s performance, Smith has 11 hits in the last four games. Gilbert also went 4-for-5, driving in a pair of runs for ETSU. Greer ended with two hits, one of which was a solo homer. Beam also contributed a pair of singles.

Senior Caleb Longley (Cleveland, Tenn.) added the exclamation point toward the end, blasting a two-run homer on a hanging slider for insurance.

Senior right-hander and fellow Dobyns-Bennett graduate Logan Gentry (Kingsport, Tenn.) made his first start of the season and earned the win — improving to a 3-0 record in 14 appearances this season.

Gentry tossed five full innings for ETSU, scattering four hits while allowing one run. The Kingsport native did not allow a free pass but did strike out a pair of batters in the decision.

Fresh off his first career save, junior Daniel Sweeney (Johnson City, Tenn.) entered in relief and tossed a scoreless sixth inning. Senior Drew Korzybski (Knoxville, Tenn.) replaced Sweeney in the seventh, allowing the only other run Marshall would score.

Junior transfer Dominick Stefanacci (Fort Myers, Fla.) took over in the eighth before fellow junior transfer James Giambalvo (Alhambra, Calif.) closed the game. The duo were able to get six quick outs on six batters faced, one of which reached on a single before Greer caught him stealing.

The Bucs wasted no time getting on the scoreboard, as Smith drove home Cook fresh off his historical first inning hit with an RBI double to right field. Smith currently rides an 18-game reached base streak and seven-game hit streak.

The early run would be the only score until the fifth inning, as ETSU took a 3-0 lead with Cook’s two run homer. Marshall cut into the deficit with an RBI single in the bottom half — making the score 3-1.

Greer led off the sixth inning with his high-dropping solo shot into left field, extending the Buccaneer lead to 4-1. ETSU is now outscoring opponents 42-9 in sixth innings this year.

In the seventh, Gilbert came up big in a two-out, bases loaded situation with a line drive single up the middle. The base knock brought two runs across and gave ETSU a 6-1 lead.

After Marshall scored its only other run with an RBI double, Longley reassured victory with a two-run bomb into left field.

The Bucs will now return home for its final home weekend of the season to face Furman, beginning Friday, May 11 at 6:00 p.m. The three-game series concludes Sunday at 1 p.m. with ETSU’s senior day.