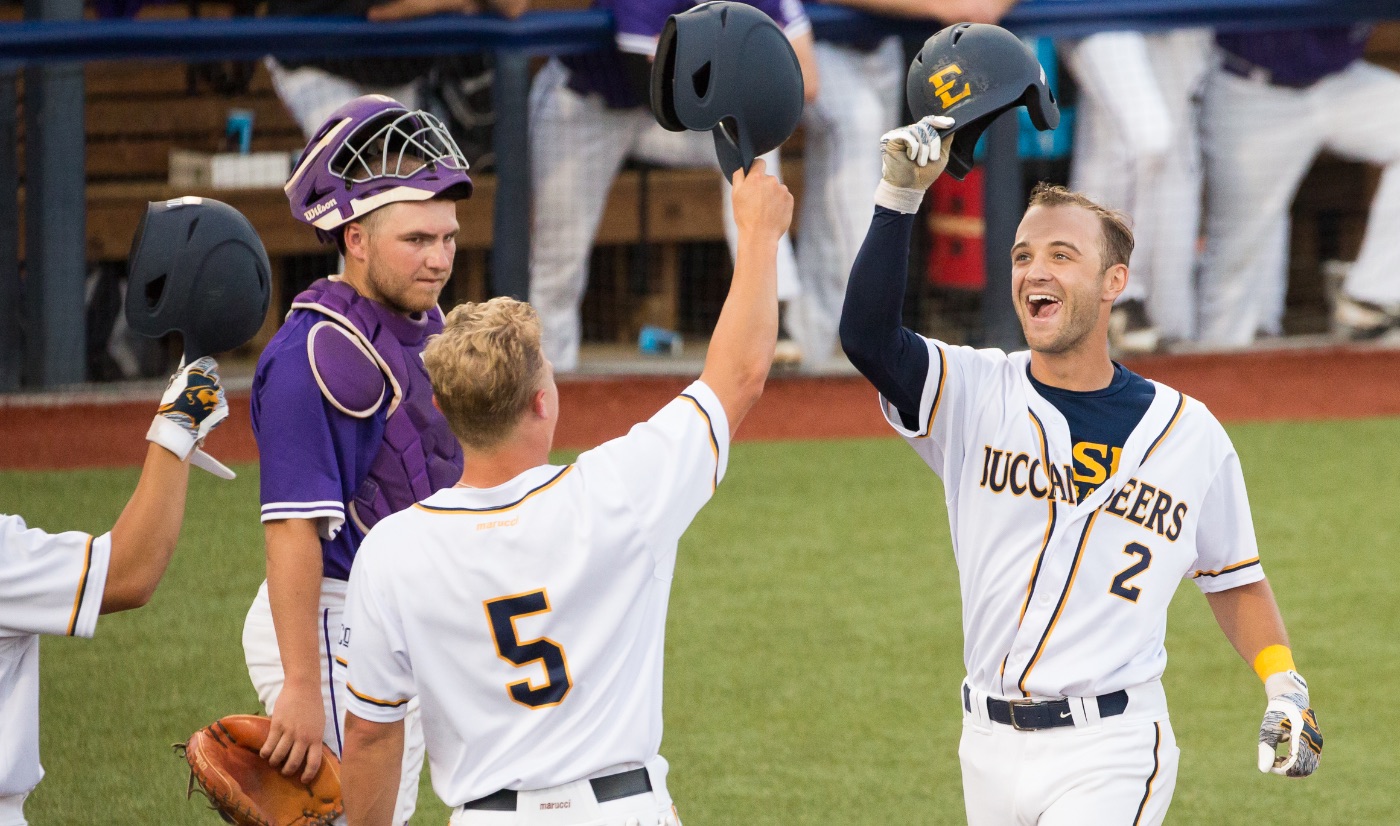 JOHNSON CITY, Tenn. (May 11, 2018) – A powerful night at the plate for the ETSU baseball team set the tone for the final home series of the season, as the Bucs blasted six homers en route to a 15-2 win over Furman Friday night.

The six ETSU homers ties a career record for home runs in a game — last set in 2010 against UNC Asheville. The feat has been accomplished five times in ETSU’s storied history.

The series-opening victory for ETSU also included a new season high with 15 runs scored and tied a season-high 17 hits — set in ETSU’s last outing at Marshall on Tuesday. All nine ETSU starters recorded at least one hit, including six players with at least two hits.

Eleven of ETSU’s 17 hits were of the multi-base variety, including two doubles and three triples. The trio of triples missed the ETSU all-time game high record of four set back in 1998 vs. Radford and in 2014 vs. The Citadel.

Four seniors and a sophomore participated in the home run rampage to kick off senior weekend, led by senior Caleb Longley (Cleveland, Tenn.) with a solo shot and a grand slam. Longley finished the night 4-for-5 with the two homers, two ground-rule doubles, a couple of runs and five RBI.

Longtime ETSU staples Chris Cook (Kingsport, Tenn.) and Aaron Maher (Brentwood, Tenn.) each had homers in two hit days. With the game tied at 2-2, Cook hit a three run homer to begin a streak of 13 unanswered runs in the fourth inning. Maher followed in the fifth with a leadoff solo shot.

Senior Ethan Rice (Erwin, Tenn.) earned the nod in the DH spot for ETSU and made the most of his opportunities, finishing a single and double short of the cycle with a 2-for-4 days. Rice’s triple was the team-high third of the season, while the solo shot marked his first career homer.

The final player to touch them all was sophomore catcher Jackson Greer (Knoxville, Tenn.) to lead of the sixth inning. Greer’s homer clinched the all-time record tie.

Joining Rice with triples on the night were the sophomore duo of Cade Gilbert (Ringgold, Ga.) and Cullen Smith (Lebanon, Tenn.), who each had four hits against Marshall in ETSU’s last outing.

Junior Micah Kaczor (Tampa, Fla.) remained patient on the mound behind 2-1 in the third inning, holding up his end with three scoreless innings. He pitched 6.0 innings in the win, allowing a pair of runs while scattering five hits. Kaczor struck out eight in the outing.

With Furman leading 2-1 heading into the middle innings, the Bucs took advantage of a two-out error in the fourth inning and scored four unearned runs to steal the momentum for good.

With a 5-2 lead after Ben Jackson (Guyton, Ga.) roped an RBI single to left and Cook added his three-run homer, ETSU scored seven runs in the bottom of the fifth. The Bucs continued the scoring with three runs in the sixth.

Dominick Stefanacci (Fort Myers, Fla.), Carter Linton (Kingsport, Tenn.) and Brock Beeler (Knoxville, Tenn.) tossed an inning of relief each, as all three held Furman hitless and scoreless in the final frames to seal the victory.

The Bucs will look for the series win over Furman tomorrow afternoon, with first pitch from Thomas Stadium set for 2 p.m.