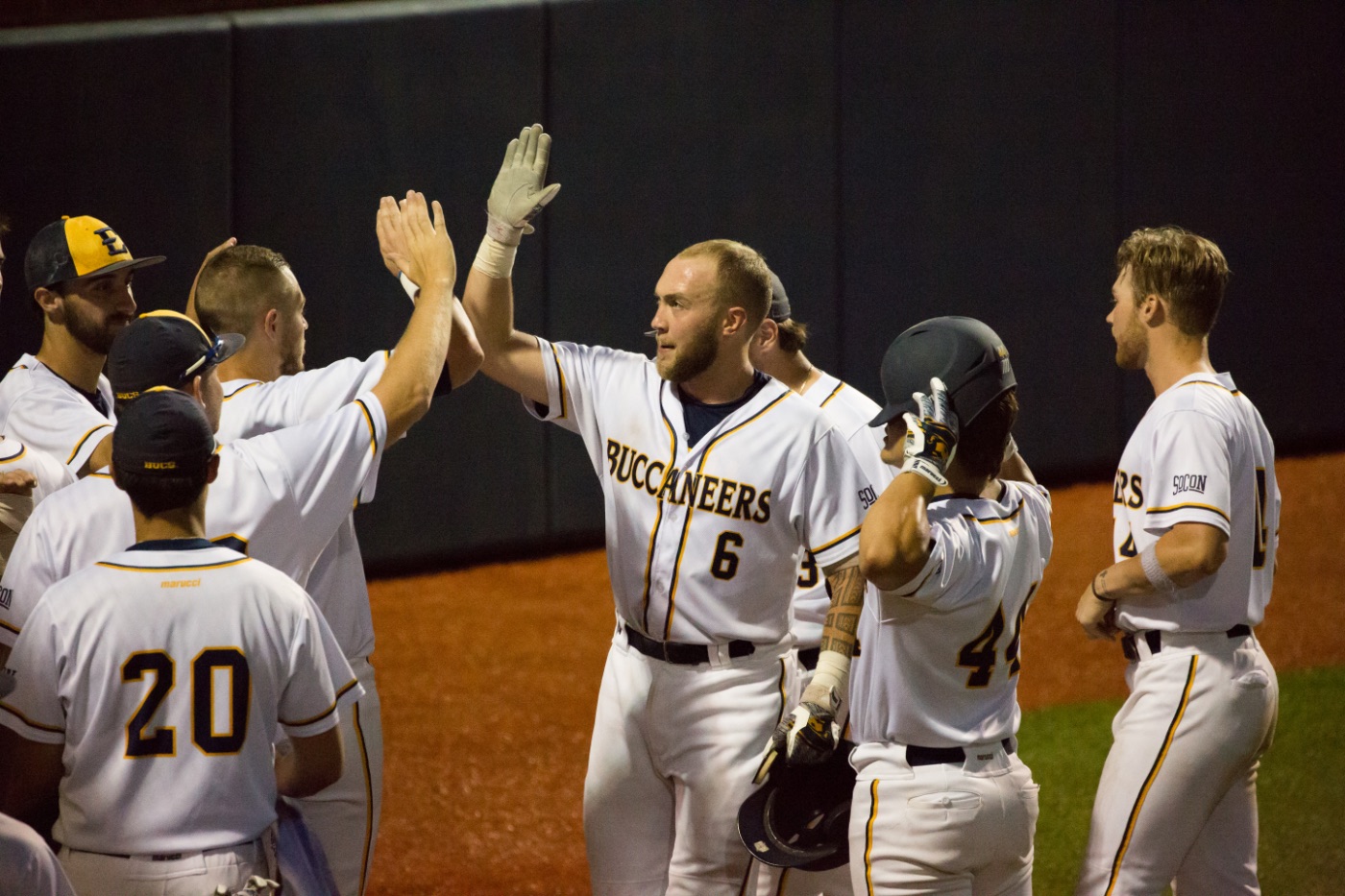 JOHNSON CITY, Tenn. (May 10, 2018) – With the 2018 Southern Conference Baseball Championship approaching May 22, the regular season draws to a close this week for ETSU baseball with four road contests.

The Bucs will first travel to UNC Asheville for a midweek game Tuesday night before trekking over to Spartanburg, S.C. for a three-game series with Wofford, beginning Thursday evening.

With the top seed locked in by No. 1 UNCG and the bottom two seeds occupied by No. 8 The Citadel and No. 9 Western Carolina, the Bucs will battle Wofford this weekend with a chance to move to as high as the third seed for next week’s tournament.

Tuesday’s contest against UNC Asheville will be streamed on the Big South Network, while all three games of the Wofford series will be broadcasted on the SoCon Digital Network.

Live stats will be available for each contest this week. Find the related links box to the right for each link.

The Bucs head into the final week looking to duplicate its offensive efforts from last week. ETSU outscored Marshall and Furman by a combined 32-19 last week while outhitting its opponents 54-38 — including 12 homers, eight doubles and three triples.

Senior Chris Cook (Kingsport, Tenn.) continues to lead ETSU with a .349 average, 46 runs, a .440 on-base percentage and is tied for the team lead with 18 doubles.

Cook is also one double away from tying Caleb Moore (2002-05) at 63 for second place on the all-time doubles list.

Senior Caleb Longley (Cleveland, Tenn.) is ETSU’s most productive hitter this season, leading the SoCon with 14 homers and is tied for second in the conference with 50 RBI’s. Longley also leads ETSU with a .696 slugging percentage.

Sophomore Cullen Smith (Lebanon, Tenn.) continues to swing a hot bat, as he has raised his batting average from as low as .241 midseason to his current average of .318. Smith recently moved into the cleanup spot for ETSU.

On the mound, senior Ryan Simpler (Lewes, Del.) is a player to watch. Simpler tallied career strikeout No. 300 two weekends ago vs. The Citadel, making him one of only two Bucs to hit the 300 milestone in school history. Reid Casey (1999-02) is the all-time leader at 323. Simpler has 303 heading into the weekend — including 80 this season.

Two-way player Danny Wilson is a key player for AVL, as he will begin things on the mound against the Bucs for his seventh start. Wilson, a utility player, leads the team offensively with a .276 batting average.

Sophomore infielder Brandon Lankford is not far behind Wilson at a .262 average. Lankford leads AVL with eight dingers and 26 RBI and a .482 slug pct.

In the last contest between the Bucs and the Bulldogs, ETSU took a 12-4 victory in Johnson City on March 27, 2018. The Bucs totaled 16 hits in the win, as David Beam and Aaron Maher each had three to lead ETSU. Cade Gilbert had a career day against AVL, driving in four RBI with his first career homer.

UNCA took the lone contest in 2017, defeating ETSU in Johnson City, 6-4. The earlier matchup in Asheville that season was canceled due to winter weather constraints.

Prior to this season’s win, ETSU’s last victory against UNC Asheville came March 2, 2016 with a 9-1 win in Johnson City. Aaron Maher went 4-for-4 in that game with a double and three singles, while Caleb Longley recorded a triple in a pinch-hitting situation.

The Terriers have proven to be a threat in the Southern Conference all season, sporting a 33-20 overall record and a 13-8 mark in conference play. When in the friendly confines of Spartanburg, Wofford holds a 22-7 home record.

Wofford’s pitching staff maintains a 4.91 team-ERA with three primary starters at marks below 5.00. Senior ace Adam Scott, a lefty, is 7-5 on the season with a 3.24 ERA. He is expected to face ETSU’s Micah Kaczor Thursday, as both players have won SoCon Player of the Week once this season.

The three starting outfielders for the Terriers are each hitting above .300 this season, including senior McClain Bradley with a team-leading .354 average and 79 hits.

The duo of senior outfielder/catcher Mack Nathanson and freshman outfielder Colin Davis each have 10 homers to lead Wofford. Nathanson bats .337 with a team-high 20 doubles and 50 RBI, while Davis hits .306 with 16 doubles and 42 RBI.

Through 44 games, ETSU holds the all-time series advantage at 26-18.

The last meeting took place in a three-game series last season, with Wofford taking two of three from the Bucs in Johnson City.

ETSU pulled out the series opener with Wofford last season in a 6-5 thriller. Behind 5-4 late in the game, ETSU’s Hunter Parker knocked in the tying and go-ahead runs in the eighth inning with his first career homer as a Buccaneer.

The last time ETSU and Wofford squared off in Spartanburg, the Terriers took the 2016 series with wins in the series opener and the rubber match. ETSU evened the series in game two with a 5-3 win.

ETSU’s last series win over Wofford was in 2015. The last time either team earned a three-game sweep over the other was when ETSU did so over Wofford in 2004.