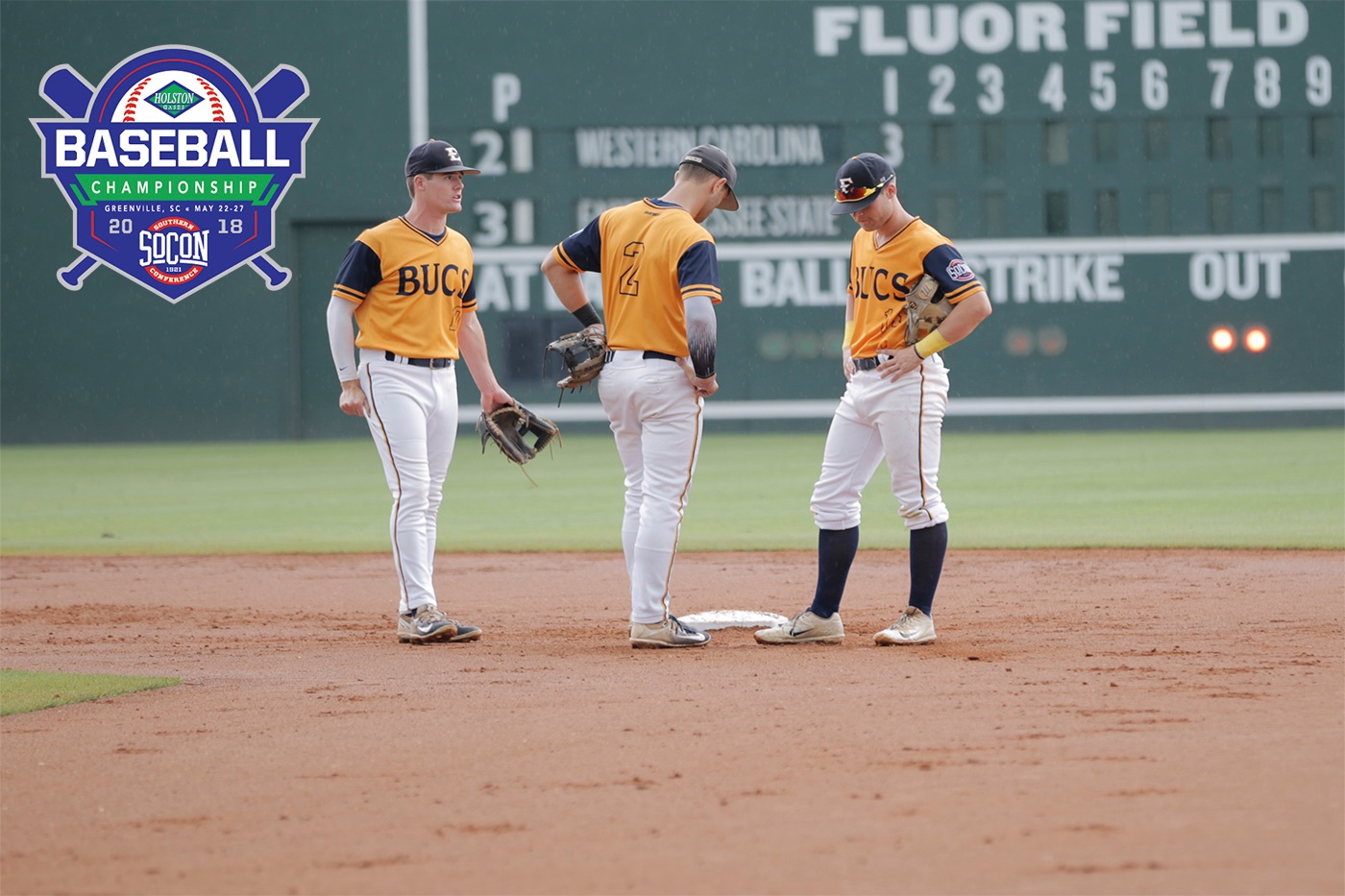 GREENVILLE, S.C. (May 25, 2018) – ETSU baseball saw its Southern Conference tournament run come to end on a rainy Friday afternoon, as Western Carolina held off a surging ETSU 11-8 to eliminate the Bucs.

With a slow rainfall to open the contest, the Catamounts jumped to an early 8-1 lead after two innings before adding three more to make it 11-1 in the seventh.

With the run rule in effect and ETSU down to its final out in the bottom of the seventh, senior Chris Cook (Kingsport, Tenn.) kept his college career alive with a clutch double, scoring Ben Jackson (Guyton, Ga.) to make it 11-2.

This sparked a late comeback attempt in the final two innigns from ETSU, scoring six more unanswered runs in hopes of keeping the season alive.

Later in the inning, sophomore Cade Gilbert (Ringgold, Ga.) continued his strong conference tournament run at the plate with a three-run homer — pulling the Bucs closer with an 11-6 deficit.

After Maher pitched a scoreless inning with two strikeouts — putting ETSU back on offense — the Bucs began its final comeback attempt.

With one out, Parker, Jackson and Gilbert all reached to fill the bases. Sophomore Jackson Greer (Knoxville, Tenn.) drew a bases loaded walk to make it an 11-7 game.

Down to the final out, Cook put one in play with a hard hit ball to third base, causing the fielder to bobble the grounder and allow Gilbert to slide in safely at third base. Jackson scored a run, making it an 11-8 contest.

Senior Caleb Longley (Cleveland, Tenn.), who ranked second in the SoCon with 14 homers coming into the tournament, represented the go-ahead run with the bases loaded. Western Carolina worked out of the jam with a strikeout to hold off ETSU and win the game.

ETSU’s debut season under first year skipper Joe Pennucci ends with a winning record, as the Bucs finish 28-25 overall with an 11-13 mark in conference play.

While ETSU’s season comes to a close, No. 9 Western Carolina continues its surprise run in the tournament with a 3-1 record from the lowest seed, defeating No. 8 The Citadel before upset wins over top-seeded UNCG and the No. 6 Bucs.

Western Carolina tacked on five early runs to jump out to a quick lead. Before ETSU’s first at-bat in the bottom half, both teams underwent a brief weather delay.

Play resumed at 12:15 p.m. and ETSU wasted no time getting on the scoreboard. Sophomore leadoff hitter Cullen Smith (Lebanon, Tenn.) nailed a solo homer to right-center, giving the Bucs their first run of the day.

The Catamounts added a trio of runs in the second inning and tallied three more in the sixth and seventh innings before ETSU’s comeback to stay alive.