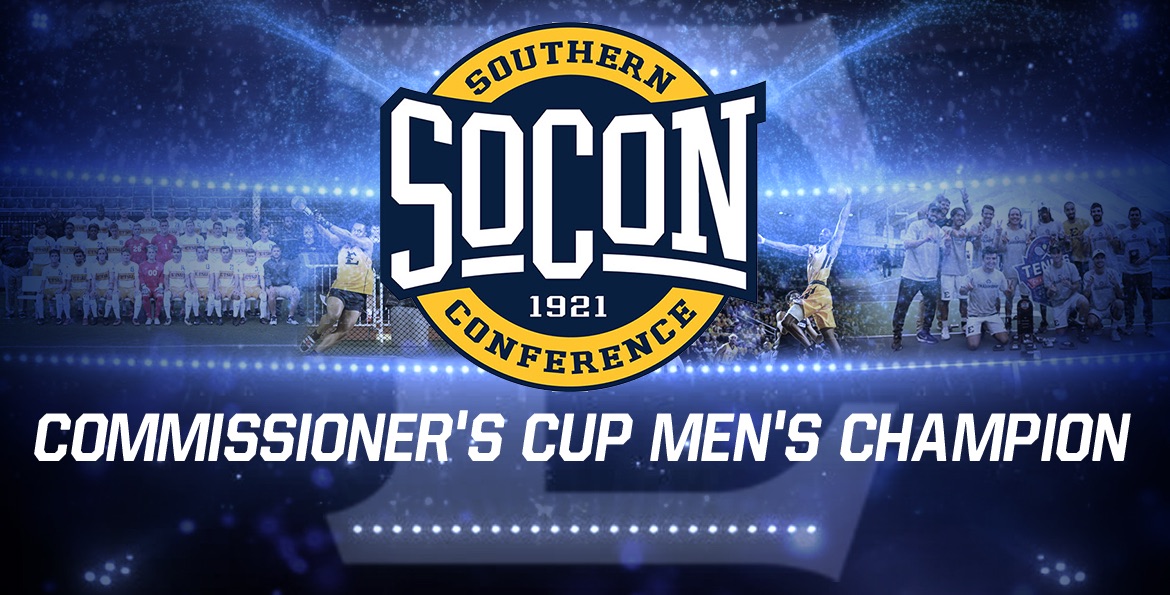 SPARTANBURG, S.C. (May 29, 2018) – For the third consecutive year and fourth time in program history, the ETSU men’s athletics program was awarded the Southern Conference Commissioner’s Cup, which is the all-sport trophy that is presented to the conference’s best all-around men’s program.

“The Southern Conference Commissioner's Cup is an incredible honor for our program,” said ETSU Athletic Director Scott Carter. “It is a testament to the commitment of our student-athletes and leadership of our coaches. Every Buccaneer should take pride in this achievement, as the competitive environment in the Southern Conference is second to none. How 'bout them Bucs!”

The Commissioner’s and Germann cups are awarded annually to the Southern Conference schools fielding the league’s best all-around men’s and women’s sports programs, respectively. Scoring is conducted on a percentage basis, with only the top seven sports for each school counting toward its season total. The SoCon sponsors 22 total sports with this year’s addition of women’s lacrosse, with the league’s three co-ed rifle teams counting toward the Commissioner’s Cup standings and the two women’s rifle teams counting toward the Germann Cup.

The Bucs, who garnered championships from men’s soccer (regular season) and men’s tennis (regular season and tournament championship), totaled 62.50 points and an .893 percentage. Tennis recorded 12 points and soccer added 10, while basketball and cross country both collected nine points, respectively. Tennis won its 12th straight conference title in April and soccer captured its first-ever SoCon regular season crown in the fall. Basketball finished second in the regular season and advanced to the SoCon title game for the third straight year, while cross country placed runner-up at the conference championships. Golf and track and field (indoor and outdoor) turned in third-place efforts at their conference championships en route to combining for 22.50 points.

Highlighted by the three straight Commissioner’s Cup titles, the Bucs won their first crown in 1982-83. ETSU is one of four teams in conference history to repeat as Commissioner’s Cup champions and the only current active school to accomplish the feat.

On the women’s side, basketball (8.75 points), volleyball (10.89 points) and tennis (8.13 points) combined for 27.77 of their 54.88 points, which placed them third in the Germann Cup for the second straight year. Volleyball earned two bonus points for winning the SoCon Tournament Championship, while basketball, tennis and softball also made appearances in their tournament championships, respectively. Cross country (8 points), outdoor track and field, (8 points), and indoor track and field (6.67 points) accounted for 22.67 points. Cross country and outdoor track and field both posted third-place finishes at their conference championship meets.