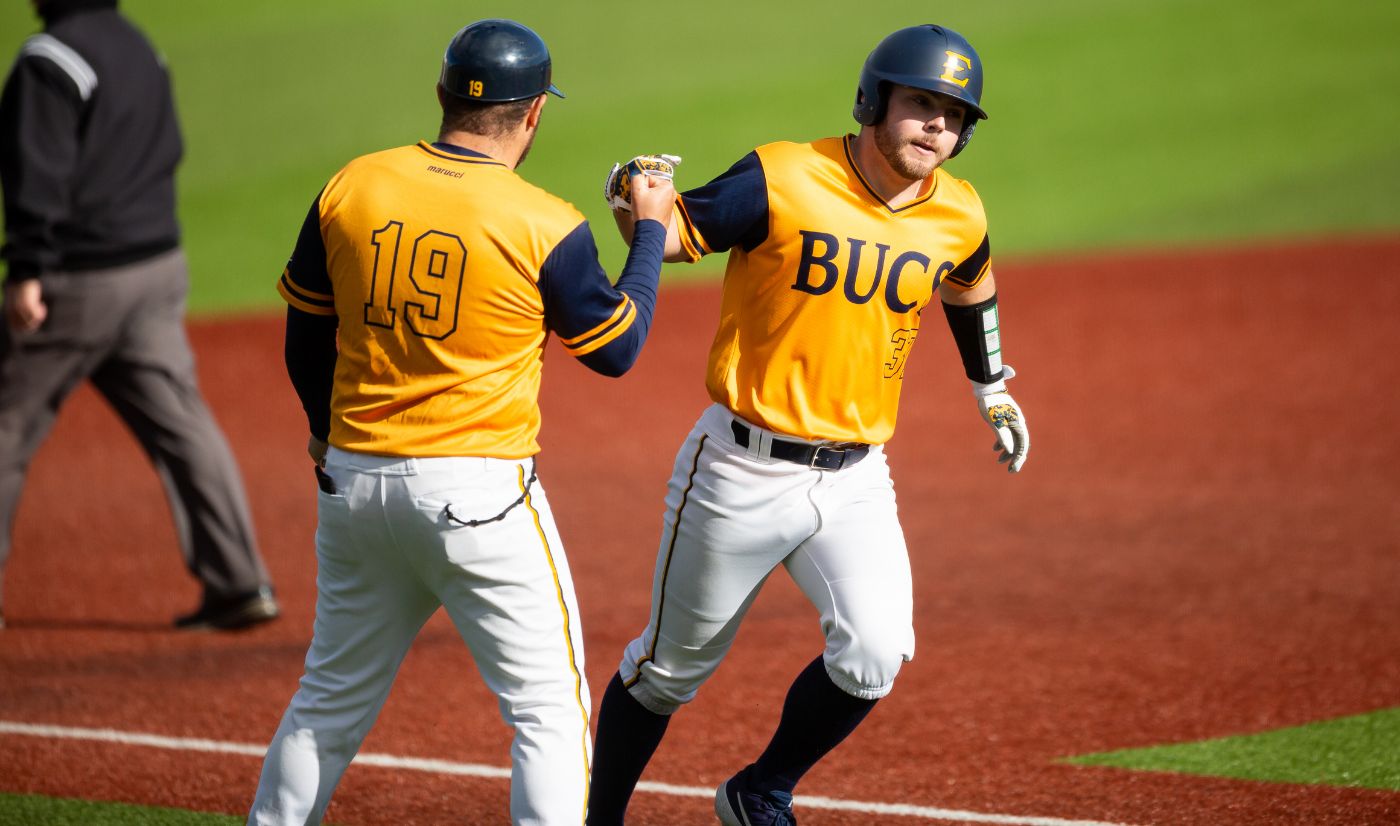 JOHNSON CITY, Tenn. (Feb. 24, 2019) – The ETSU Baseball team continued its hot start to the 2019 season, winning both games of a doubleheader to earn the series sweep of Wagner on a windy Sunday in Johnson City.

A decisive 7-1 win opened the day for the Bucs, followed by a come-from-behind 4-3 victory in the series finale to clinch the sweep. Both games were shortened to seven-inning contests.

The weekend sweep improved ETSU to 6-1 on the year and gave the team its first back-to-back weekend sweeps since 2016. Wagner, who completed a historic 2018 season with a 38-18 record, fell to 0-6.

The Bucs racked up 15 hits and had a remarkable 6.0 inning start from junior Landon Knack (Johnson City) in a 7-1 win to open the twinbill.

Knack scattered five hits and allowed just one unearned run, striking out eight batters in the process. Freshman Trey Oglesby (Knoxville) relieved him for the final half inning, striking out the side to cap the victory.

Freshman left fielder Ethan Shelton (Lebanon) would begin a memorable day in his college career with the first RBI of the day, riding the left bound wind all the way to the fence for a run-scoring double in the second inning.

After ETSU scored on a wild pitch the following frame to take a 2-0 lead, Wagner would find its only run off Knack in the fourth inning, unearned on a fielding error in the outfield.

In the bottom of the fourth, ETSU tacked on back-to-back homers for the first time this season to extend the lead. Junior Cullen Smith (Lebanon) did his damage first with a solo shot off BucVision in left field, then was followed by junior Jackson Greer (Knoxville) with a long ball to left center on his 21st birthday.

The final insurance runs came from a sac fly from freshman Markell Graham (Atlanta, Ga.) and a two-run double from Gilbert into the left center gap.

The dramatics were up a notch in the series finale, as the Seahawks were on the verge of their first win of the season. The Bucs were not only looking for the sweep, but also their sixth straight win at Thomas Stadium to remain unbeaten at home.

Each team traded runs in the opening frame, as Wagner took the early lead with an RBI single from Tyler Sanfillippo before ETSU retied the game with a run scoring fielder’s choice with the bases-loaded.

The Seahawks saw a spark in the next inning when power hitter Joe Silverstrone stroked a two-run dinger with two outs to make it a 3-1 game. The Bucs added a run in the third with three quick singles, as Cady scored Jake Lyle (Spring Hill) to pull within a run.

ETSU missed two opportunities to take the lead in the third and fourth innings, stranding the bases loaded both times. The Bucs would leave 11 on base for the contest and 21 stranded runners for the doubleheader.

The turning point came in the bottom of the fifth with two outs following a walk to Kyle Richardson (Zionsville, Ind.). In a 1-2 count, Shelton lined his first collegiate home run over the left field corner to give his team the lead and the win.

The ETSU pitching staff once again showed its resilience after three runs allowed by starter Daniel Sweeney (Johnson City) in a 4.1 inning, five-strikeout day — two of which came from one swing.

Leftys Daulton Montagna (Pennsville, N.J.) and Matthew Mercer (Chattanooga) held the team scoreless with a combined effort of 1.2 innings. In the final inning with a one run lead, senior closer James Giambalvo (Alhambra, Calif.) struck out all three batters for his second save of the season.

The following weekend, ETSU will look for a third straight sweep against another New York college as LIU Brooklyn comes to Johnson City on March 1-3. Next weekend will be Read Across America weekend as fans are encouraged to bring books for ETSU Athletics to donate locally.