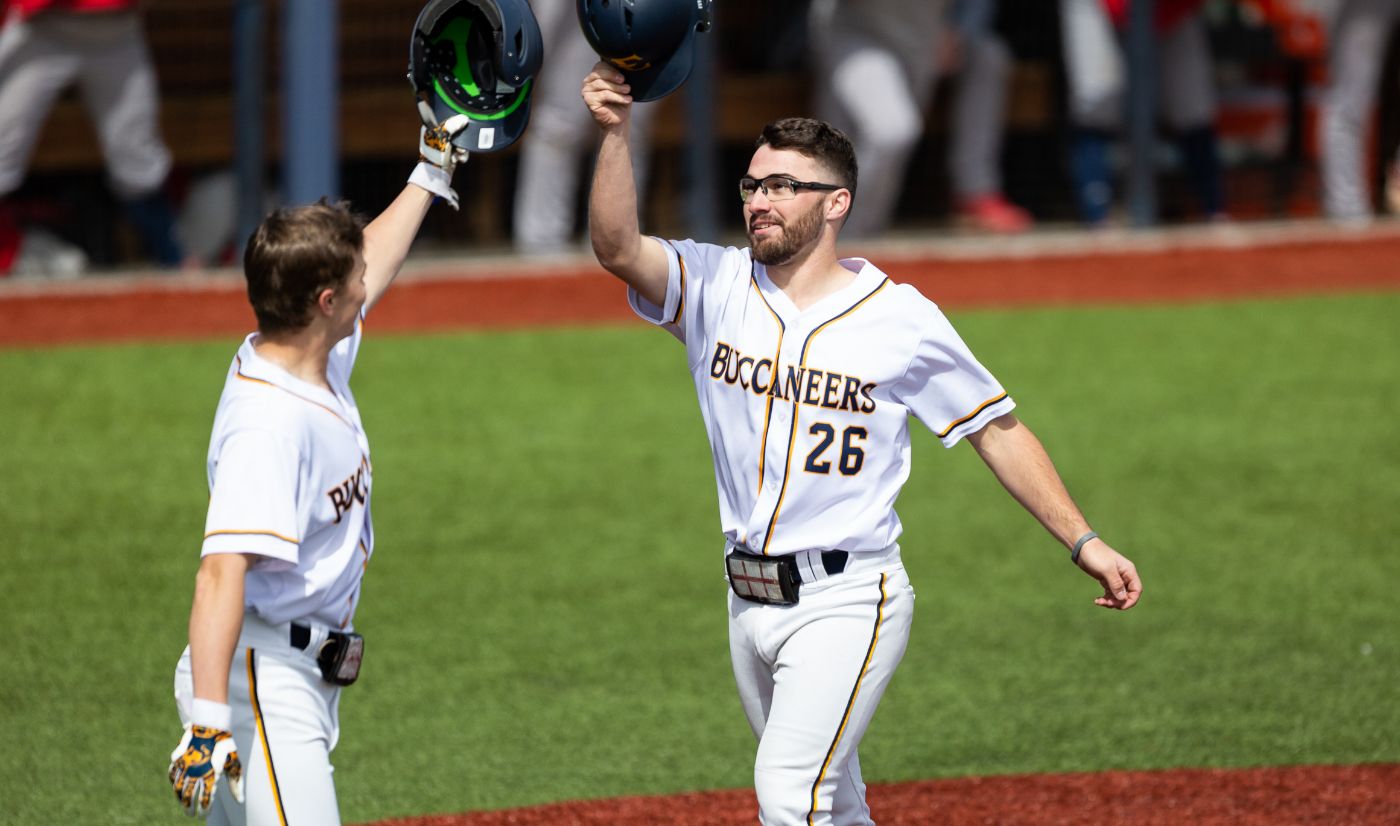 JOHNSON CITY, Tenn. (March 16, 2019) — Home field advantage remained true for the ETSU Baseball team on Saturday, as the Bucs improved to an 11-0 home record with two wins over NJIT at Thomas Stadium.

ETSU improved to a 13-4 overall record with a 12-2 win in the opener and later followed with the series-clinching victory in the nightcap, 8-1. The Highlanders dropped to 7-6-1.

The Bucs set the tone with 11 unanswered runs in the opener, maintaining a shutout into the eighth inning.

Both teams had eight hits, but four of ETSU’s hits were of the long ball variety. The four homers accounted for nine runs in the first five innings — including two bombs from freshman Colby Emmertz (Hampstead, N.C.) for his first collegiate home runs.

Emmertz would extend the lead with his first career dinger in the second inning — a solo shot to left center. The freshman later smashed a two-run homer in the fifth, as he competed the game 3-for-4 with a pair of runs and three RBI.

The fourth inning would bring home three more, as junior Cullen Smith (Lebanon) extended his hitting streak to eight games with his third homer in five games. Smith is now batting .419 on the season with 26 hits.

Emmertz’s fifth inning bomb extended the lead to 9-0. Two more would come across in the sixth for ETSU, as Smith hit a sacrifice fly and sophomore David Beam (Knoxville) drew a bases loaded walk.

NJIT finally answered in the eighth upon Kaczor’s exit with an RBI single. ETSU padded the lead even more in the bottom half after scoring on an error. The Highlanders loaded the bases in the ninth and scored on a walk, but would not rally enough.

The Bucs went on to clinch the series in the nightcap, scoring eight unanswered runs after falling behind early in the second inning.

Junior Johnson City native Landon Knack took the mound looking for his fourth win and found it. He tossed 6.0 innings, allowing just one early run on four hits. Despite one early walk, Knack finished with six strikeouts. The duo of Matthew Mercer (Chattanooga) and Hooper Mills (Brentwood) combined for a one-hit shutout in the final three innings.

The Highlanders came to life with a two-out single in the second frame, scoring the first run to take a 1-0 lead. The Bucs would answer in the third inning as Cade Gilbert (Ringgold, Ga.) sac’ed home the tying run.

It was all Buccaneers the final two-thirds of the way, highlighted by a four-run sixth inning. Junior catcher Jackson Greer (Knoxville) and Cady each drew bases loaded walks before Gilbert brought home a couple more with a double to left center.

Emmertz, Gilbert, freshman Kyle Richardson (Zionsville, Ind.) and junior Jake Lyle (Spring Hill) each had a pair of hits as the Bucs totaled 11 on the day. The pitching trio limited NJIT to five hits in the nightcap.

The series finale is set for Sunday at 1 p.m. inside Thomas Stadium. Sunday’s game will be ETSU’s St. Patrick’s Day promotion, where the first fans to arrive will receive a special edition green ETSU T-Shirt, while supplies last.