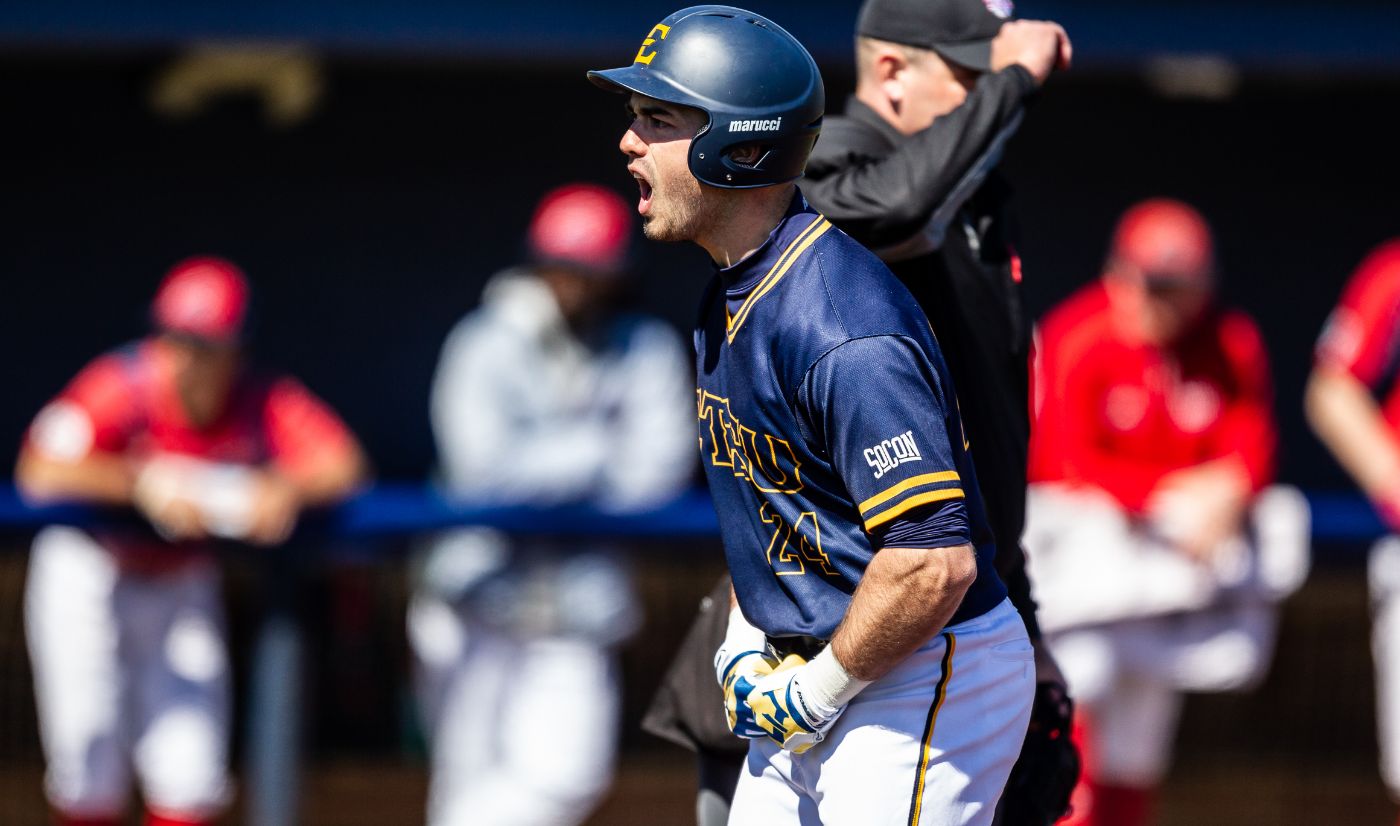 JOHNSON CITY, Tenn. (March 17, 2019) — Just when it seemed ETSU Baseball’s home unbeaten streak was in jeopardy, the late-inning luck of the Irish turned in favor of the Bucs — resulting in a 3-2 victory over NJIT on St. Patrick's Day.

Tied 2-2 heading to the bottom of the eighth, junior Ethan Cady (Soddy Daisy) targeted the first pitch he saw and dispatched a go-ahead homer to lead off the inning. With the one run lead, closer James Giambalvo (Alhambra, Calif.) slammed the door in the ninth, sending ETSU home with the “W.”

The win marked the 12th straight home victory for the Blue and Gold — the best start in Thomas Stadium history. ETSU (14-4) has now swept four straight home series and have won all five of its weekend series to open the year. NJIT fell to .500 with a 7-7-1 record.

The Highlanders took an aggressive approach against strike-throwing pitcher Daniel Sweeney (Johnson City), who had allowed only one walk coming into Sunday. NJIT collected the first run in a three-hit second inning with an RBI single by Nick Hussie.

ETSU answered right back in the bottom half as junior shortstop Cade Gilbert (Ringgold, Ga.) ripped his first home run of the 2019 campaign. The solo shot tied things up at 1-1.

Following a fourth inning RBI from NJIT designated hitter Tom Brady to regain the lead at 2-1, another Ringgold native had the answer.

In the sixth inning, junior first baseman Noah Hill retied the game with a sacrifice fly. Junior catcher Jackson Greer (Knoxville) led off the inning with a key single, moving his way around the bases to allow the long flyout to produce the tying run.

Sweeney would leave the game in a no-decision situation, throwing 6.0 innings with two runs allowed on six hits for the quality start — his third QS in four outings. Freshman Nate Tate (Manchester) relieved him in the seventh, stranding two runners in scoring position before sitting down the side in the eighth.

Cady would take advantage of the offensive stall with a go-ahead homer, allowing Tate to earn the win. Giambalvo had two reach in the ninth via an error and a hit batter, but quickly stranded the tying and go-ahead runs with a foul out.

Gilbert went 3-for-4 with a homer, while Greer added a pair of singles to lead ETSU.

The Bucs now turn their attention to their third nationally-ranked opponent of the season, as the No. 21 Tennessee Volunteers come to Johnson City on Tuesday, March 19 at 6 p.m. Fans are encouraged to wear blue as part of our “Blueout” promotion, presented by Alumni Hall.