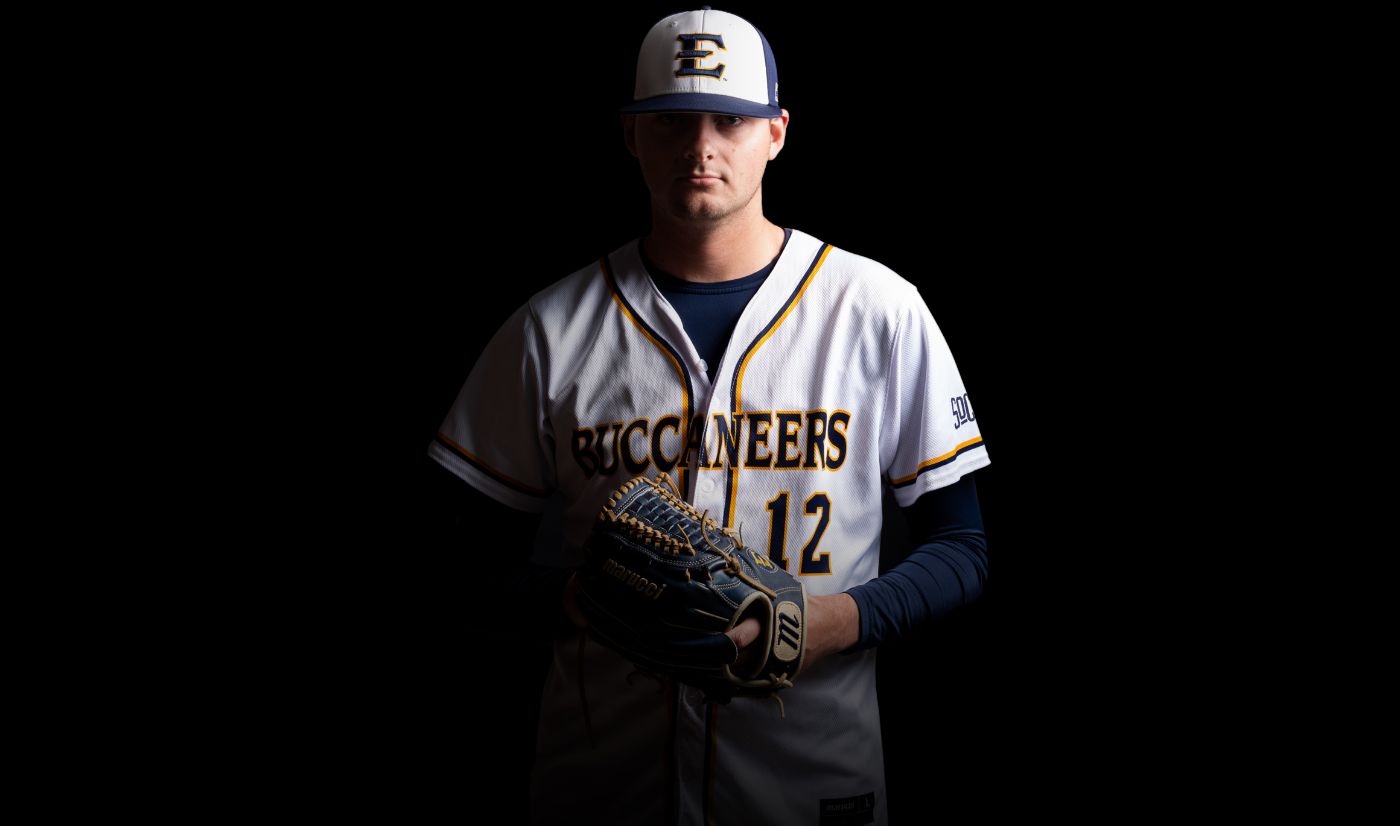 Daniel Sweeney: A Diamond in the Rough
Related Links

JOHNSON CITY, Tenn. (March 26, 2019) – It was a rough start on the diamond for ETSU baseball’s redshirt senior pitcher Daniel Sweeney.

In his first three years, he pitched a combined 4.1 innings.

He was the designated “walkie-talkie” bullpen guy that communicated between the coaches and the pitching staff. His 2018 saw and increased workload, but not exactly the numbers Sweeney desired on the mound.

In 2019, ETSU may have found its diamond in the rough.

A Science Hill graduate, a Johnson City native — and possibly the most passionate Buccaneer fan this side of the Mississippi — Sweeney has represented his school proudly.

Through his first six starts this year, the 6’5’’ right-hander owns a 2.27 ERA (seventh best in the Southern Conference) and a 4-0 record. Sweeney went 17.1 innings before allowing his first walk of the season, as he is among the nation’s leaders in strikeout-to-walk ratio with 31strikeouts and four walks.

The redshirt senior — a “super senior” in the eyes of his teammates — said a few years back he would’ve never imagined being in this position.

Prepping just minutes away from ETSU’s campus, Sweeney had zero offers out of college. No D1, D2, D3, NAIA or JUCO offers. Former ETSU head coach Tony Skole, now at The Citadel, saw Sweeney in action a few times at Science Hill and gave him his only opportunity — as a walk-on.

“My only options were to either walk on here and play baseball or don’t play baseball anymore,” he said. “Coach Skole called me and said he wanted me to be a part of the team, but couldn’t offer me a scholarship. I waited about a week and got another call from one of the assistants saying I had 24 hours to decide or they were moving on. At that point I decided ‘Well, I guess I’m playing at ETSU.’”

Sweeney knew throughout high school that college baseball might not be a possibility, even though that was his biggest desire.

“I always told my dad I wanted to play baseball in college and he said to have a backup plan if that doesn’t work out,” he said. “So I walked on and we had too large of a roster, so I thought for sure I was going to get cut. It was pretty clear that I was not good enough to be on the team.”

But by the skin of his teeth, Sweeney survived.

“Some things happened to certain guys — getting cut or kicked off the team — and Coach Skole didn’t have to cut anybody. I redshirted and got to stay on the team, but I thought the next year I would for sure get cut. After throwing 1.1 innings that year, I thought I would get cut the following year — and I was pretty positive this time.”

Sweeney didn’t get cut, but only saw three innings in 2017.

The first three years were so tough, Sweeney said people openly disclosed their opinions to him and his family.

“I remember being at an event, and this guy came up to me and wasn’t sugar-coating anything,” he explained. “He was just kind of talking to me and made a point to say ‘I hope you know you’re never going to pitch here. You might want to consider transferring.’ Throughout my career, that’s always been in the back of my mind.

“Nobody thought I would ever be able to pitch here. Random people would go up to my dad and say ‘Hey, have you thought about transferring him?’ Or just telling me I would always be known as the walkie-talkie guy sitting at the end of the bench.”

Sweeney said he humiliation really kicked in for him when he would be used in the starting lineup as a designated hitter for matchup purposes before being subbed out.

“When the DH position came up, the coaches would see if the righties or lefties were getting out and determine which hitter would match up better with the pitcher,” he said. “My name would be on the card, but once I’m subbed out — I’m done. If I saw my name on the lineup card, I knew I wouldn’t get to pitch that day. But everything happens for a reason.”

Sweeney said maybe he needed that experience to grow. Maybe he wasn’t ready. Maybe he would get cut or have to transfer the fourth time around.

That offseason, he got a phone call that caused even more uncertainty.

“I was in Alaska playing summer ball when Coach Skole called me and said he was taking The Citadel job,” Sweeney said. “I told him I understood and I was happy for him, and he wished me luck. Two or three weeks went by, and we had no idea what would happen with the coaching job (at ETSU).”

A first time head coach coming from Stony Brook as one of the nation’s most prolific recruiters, Pennucci came to Johnson City without a single tie. His first interaction with Sweeney came via phone call.

“Coach Pennucci called me right before one of our summer games, and I walked away from the field to answer it knowing ‘this could be our coach,’ he said. “It ended up being Coach and he just introduced himself and asked me if I was playing summer ball. When I told him I was in Alaska, he loved it. He and Coach (Micah) Posey and all his staff are big summer ball guys.

“But still in the back of my mind, I was like ‘He’s a new coach. I’m going to get cut.’ There’s no way he was going to keep me around, just look at my numbers. You can get some freshman and he would probably be just as valuable as I am. That’s what I was thinking.”

In Pennucci’s eyes, there was potential.

The new skipper saw a veteran that was willing to take on any role he could get to help the four letters on the front of the jersey — instead of the two-digit number on the back.

“Dan is a fabulous kid, hard worker and has been a good leader for our young players,” Pennucci said. “This is a difficult game, and there are plenty of ups and downs. His resilience and continued work should be a lesson for everyone.”

Sweeney had his moments in 2018. He pitched 37.0 innings with a 3-2 record and a 6.08 ERA, making nine starts with 17 appearances. He never went beyond five innings, but helped in some tight spots as a reliever and midweek starter.

He earned his first career start against Eastern Kentucky on March 7, 2018. The decision to start Sweeney came on short notice.

“Coach Posey told me at the field during batting practice that I would be starting — I did not know the entire day,” Sweeney said. “I said ‘sounds good’ but inside I was freaking out thinking ‘How can you not tell me? I could’ve been preparing last night.’ But I started, and did good, and got to keep starting and get innings.”

One of the rarest feats in baseball, even in the pros, is the immaculate inning — nine pitches for three strikeouts in a single frame. Sweeney was one of only two pitchers in NCAA Division I last season to accomplish this feat.

But 2019 has been much more than an immaculate inning. It’s been a consistent frustration for opposing hitters, including a near no-hitter against Georgia State on March 9.

“I started having the mindset that if I get the first guy out, I’m about to throw a perfect game,” Sweeney said. “If I get through the inning, I start thinking ‘I have a perfect inning,’ and this is literally every game. It was just staying in a routine and having that mindset for every single pitch.”

Sweeney has now had four straight quality starts — most recently getting a win over Western Carolina to open conference play on March 24.

Micah Posey, ETSU’s second year pitching coach that had success in the Los Angeles Angels organization nearly a decade ago, said Sweeney’s role on the team is crucial both on and off the field.

“No one bleeds blue and gold more than Daniel Sweeney,” Posey said. “ His career path has not been easy, but it has made him into the person he is today. He has been a blessing to have on staff and an excellent example for our younger players.”

Sweeney credits Posey for most of his development both as a pitcher and as a leader.

“Being around Coach Posey has helped me a lot — and anybody will tell you that,” he said. “He is a great pitching coach. Getting experience and being around him and guys like Micah Kaczor that really understand pitching and understand baseball has helped a lot. I feel like I learned more last year than I did my first three years combined.”

The Bucs are off to their best start in program history with a 17-5 record. Sweeney has been a large part of that success. The senior leader said that with a new culture in place, Bucs fans can expect big things on the horizon.

“We (Sweeney, Kaczor and closer James Giambalvo) were challenged (as the three seniors) to set the culture,” Sweeney said. “Everyone is looking at you. It’s your turn. You have the chance to change the culture that .500 is good enough here. It’s not. It starts with our expectations.”

As a fifth year player, Sweeney’s teammates see him as the clubhouse leader.

“Getting to play with Sweeney over the past two years has been awesome,” said Kaczor, a 2018 transfer. “Just to watch a guy that works as hard as he does develop into the pitcher and man he is now has been special.

“He has been a huge part of our team, especially for the younger guys, to look up to him and see what happens when you put in the hard work. From not getting any innings as a freshman, to now starting as a senior, he has done it right the whole way.”

Kaczor said there were a lot of instances where Sweeney could have spoken negatively about not getting playing time, as some might do in his situation. But Sweeney took the high road — leaving a lasting impression on him.

“He never talked bad about teammates or coaches when he wasn’t given the opportunity, but stayed ready,” Kaczor said. “When the opportunity presented itself, he took full advantage. Sweeney has been one of my favorite teammates to play with over the years. Just the way he interacts with guys and goes about his business has help set a standard for what ETSU Baseball should be.”

According to Kaczor, the incumbent clubhouse leader has made lasting relationships with his coaching staff and teammates that will last a lifetime.

“Daniel has become one of my best friends over these two years, and his unselfish personality can reflect how good of a person he is,” Kaczor said. “I know he will be successful in life no matter the path he takes, and I am very proud to say I was a part of it.”

Pennucci echoed those sentiments, stating that Sweeney’s story can be an inspiration to anyone.

“It’s truly a case of hard work pays off,” Pennucci said. “He has an extraordinarily bright future in whatever direction it takes him. Personally, he has been a pleasure to be around.”