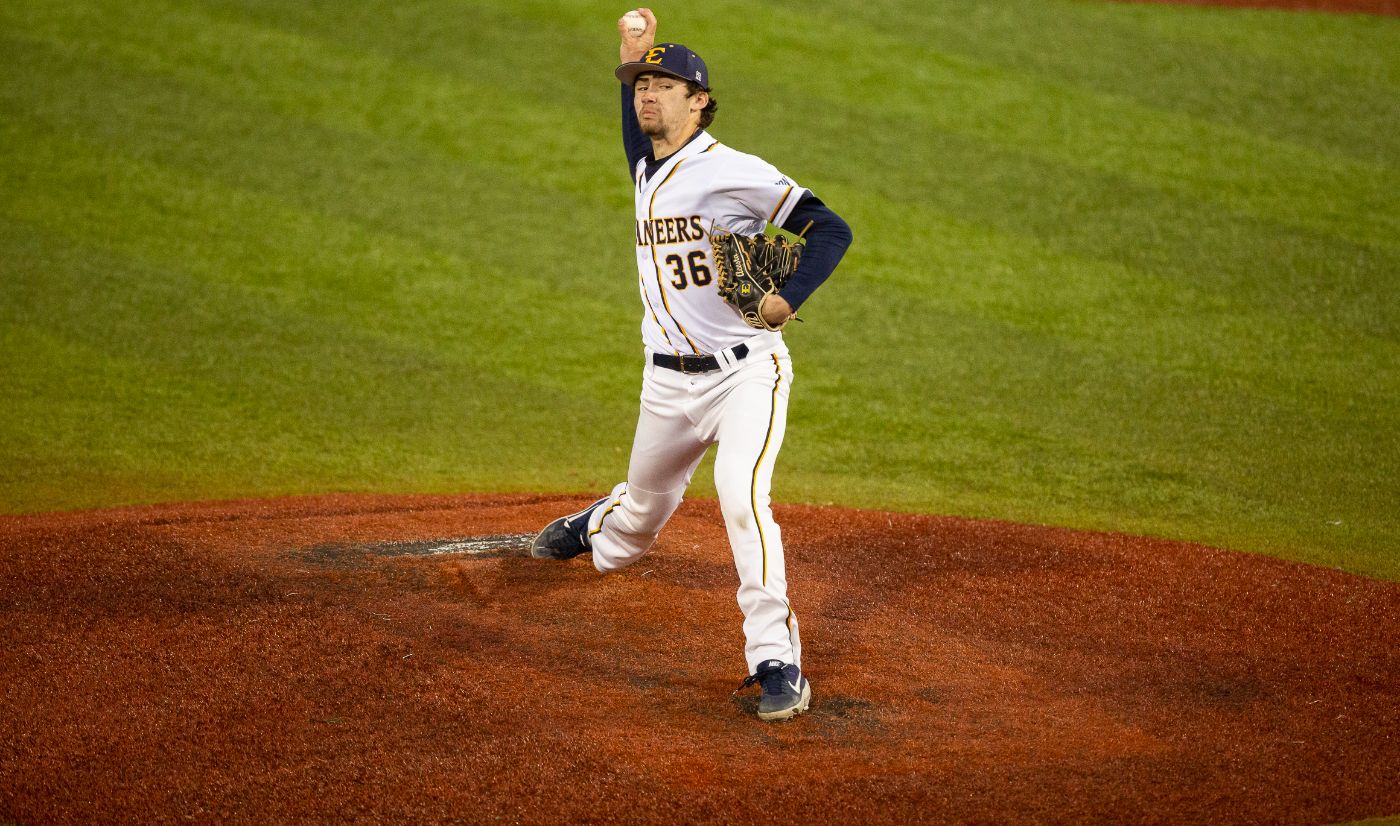 JOHNSON CITY, Tenn. (April 2, 2019) — Thomas Stadium experienced another nail-biter on Tuesday night in midweek action, as ETSU baseball escaped with a 6-5 win over Radford in a tight affair.

The final frame furnished a fever pitch finish, with ETSU leading 6-5 in the top of the ninth. Freshman right-handed pitcher Zach Kirby (Upland, Calif.) stranded the tying run on third with a punchouts for his first collegiate save, sending the anxious crowd into a frenzy.

ETSU used a six-pitcher attack, with no player tossing more than three innings. The win was credited to Joe Acosta (Vineland, N.J.) who retired nine straight batters in three perfect innings of work. Acosta (1-0) also had two strikeouts in his first collegiate win.

Offensively, ETSU was led by junior catcher Jackson Greer (Knoxville, Tenn.) with a 3-for-3 day. Greer reached in all four plate appearances with three singles and a hit-by-pitch. Freshman outfielder Ethan Shelton (Lebanon) added two hits and a pair of RBI off a first-inning double.

The Bucs struck first with four runs off Radford starter Hunter Williams (0-2), who picked up the loss in just 1.2 innings. Shelton’s two RBI double and an RBI single by David Beam (Knoxville) made for a three-run first inning. Greer’s RBI single in the following inning would bring an end to William’s day.

Radford mounted three runs in the third to make it a 4-3 ballgame. Both offenses stagnated midway through with solid pitching on both sides until ETSU found breathing room in the seventh, courtesy of an RBI fielder’s choice by Kyle Richardson (Zionsville, Ind.) on a would-be double play.

The Highlanders once again had an answer, pulling back within a run at 5-4 off the second of two RBI hits from J.D. Mundy.

The bottom of the eighth saw ETSU extend its narrow lead again on an exciting play, as a fly ball off the bat of Jake Lyle (Spring Hill) landed past a diving glove for a triple, which extended to a run scoring play off a throwing error from the cut off.

The anxiousness came back in the ninth when Radford looked to rally with a pair of base runners. After regular closer James Giambalvo (Alhamba, Calif.) faced two batters, his fellow statesman Kirby retired the final three outs to seal the win.

The Bucs return to Southern Conference play on Friday for a three game set against VMI in Lexington, Va. First pitch for Friday’s series opener is set for 6 p.m.

The VMI series will mark ETSU’s first conference road trip of the season. In their conference opener, the Bucs swept Western Carolina at Thomas Stadium to begin SoCon play with a 3-0 record.