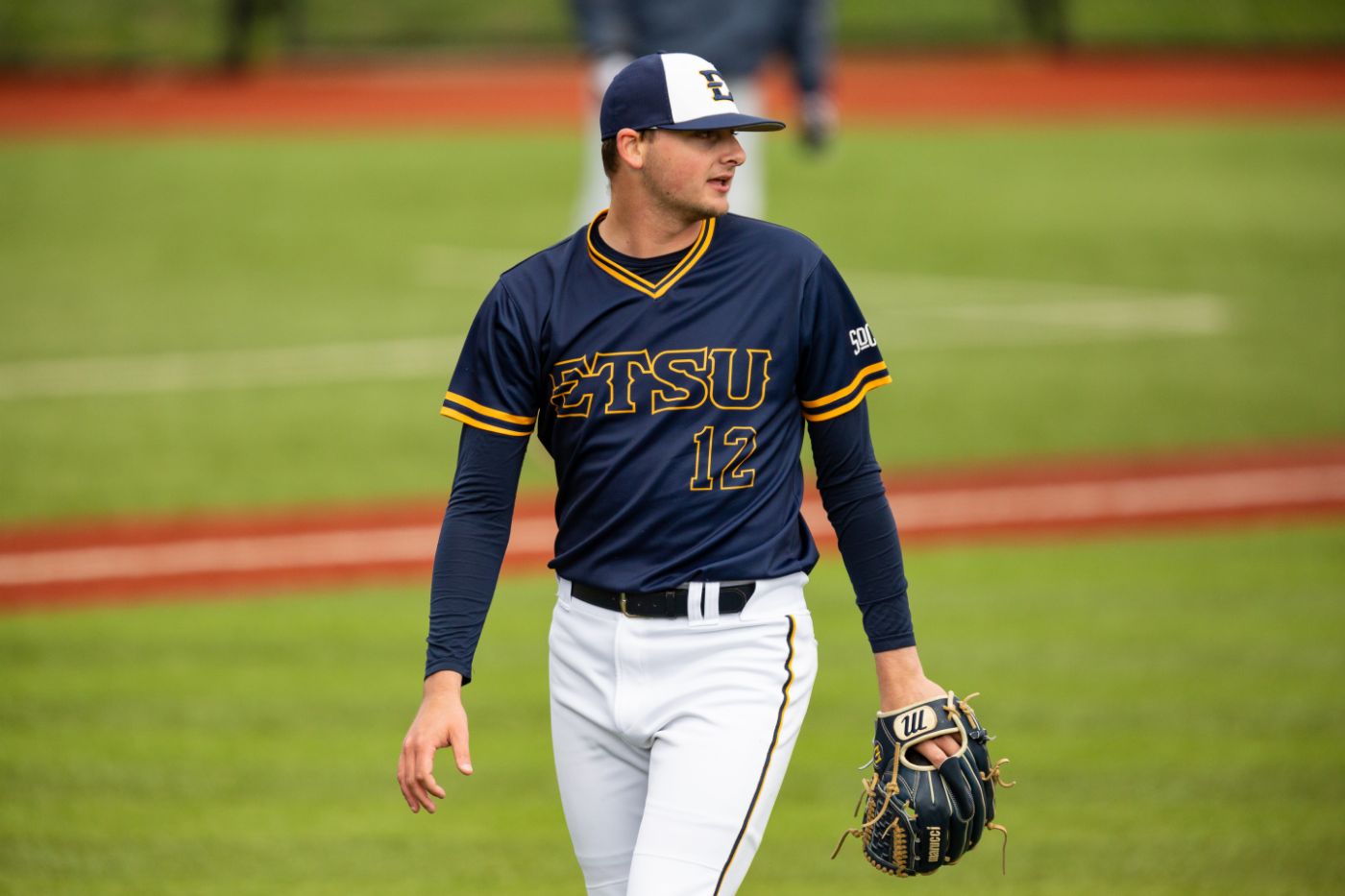 GREENVILLE, S.C. (April 13, 2019) — ETSU baseball was not discouraged after a heartbreaking loss in the series opener at Furman in Greenville, S.C., surging back on Saturday to win a pair over the Paladins to take another conference series.

With the 8-7 and 11-5 wins, ETSU (25-10, 6-3 SoCon) earned its second conference series win of the season. Furthermore, ETSU has yet to lose a Saturday game with 13 straight victories.

ETSU evened the series with a thrilling, 8-7 victory to open the day.

Despite a six run deficit, Furman (12-23, 5-7) charged back with a late rally that saw five runs cross before the Buccaneers spoiled the late hit parade. ETSU was outhit 15-12, but stranded 15 Furman base runners to keep the edge.

Junior infielder Jake Lyle (Spring Hill) led the team with a 3-for-5 day, while the production mostly came from the leadoff spot. Sophomore David Beam (Knoxville) went 1-for-5, but had three RBI thanks to a two-run bomb in the fourth inning.

Junior right-hander Landon Knack (Johnson City) remained perfect on the year, improving to 8-0 with the win. He tossed 6.2 innings with three runs allowed, striking out eight and walking two on 116 pitches. Matt Lazzaro (1-4) was tagged with the loss for Furman.

Coming in with the bases loaded and the winning run on base, senior closer James Giambalvo (Alhambra, Calif.) came through clutch and slammed the door for his five save this year.

Jabari Richards put Furman ahead early in the contest with a solo shot to right center field, but the lone run would not hold up after ETSU’s five run inning in the fourth.

A solo homer from Ethan Shelton (Lebanon) and a two-run blast off the bat of Beam made it a 3-1 ball game. Following a double steal from Lyle and Smith with two outs, junior catcher Jackson Greer (Knoxville) roped a two-RBI single to add more damage.

Knack found himself in trouble in that bottom half, allowing three straight singles to load the bases with nobody out. A popout to second and a pair of strikeouts stranded all three runners and promptly ended the threat.

Furman scored its second run on an RBI single in the fifth, then ETSU added three in the seventh to extend the lead.

Freshman Kyle Richardson (Zionsville, Ind.) protected the plate with two strikes and a runner on, slicing one into right field for an RBI single. He would go on to score on a wild pitch, then an RBI groundout by Beam later brought home Sean Kearney (Powell) to make it 8-2.

Furman then began their five-run comeback in the final three innings, but Giambalvo shut down the rally with the final two outs, stranding the tying run on third and the winning run on second.

After a pair of dramatic one run games to open the series, the Bucs dominated the rubber match to take its first conference road series of the season by an 11-5 final.

The hitting montage saw 12 knocks for the Bucs, including three more from Lyle to finish the series 9-for-14. Junior Cade Gilbert (Ringgold, Ga.) and freshman Ethan Shelton (Lebanon) each had two hits and combined for three runs and five RBI. Greer reached in five of his six plate appearances, scoring twice.

Sweeney allowed three homers despite allowing just two all season coming into the contest, but worked through them to pick up the win. David Dunlavey took the loss for Furman, allowing six runs in five frames.

ETSU took a 4-0 lead in the second inning, powered by a bases loaded walk, an RBI fielder’s choice and a two-RBI single by Lyle. Furman got on the board with a solo shot in the bottom half.

One run touched in the fifth for ETSU as Gilbert grounded one to second and reached on a fielding error. Gilbert was credited with the RBI, as Cullen Smith (Lebanon) scored from third.

The Bucs took a commanding lead in the sixth with a couple more runs, one of which was produced on a throwing error after a bunt single by Lyle, scoring Beam. Lyle would later touch home himself on a sacrifice fly from Gilbert.

Furman made it a ball game again with a couple more homers off Sweeney following the seventh inning stretch. A two-run homer from Bret Huebner and a solo shot from Jabari Richards made it 7-4.

ETSU answered with three more in the eighth from an RBI single by Gilbert and a two-RBI triple from Shelton. Freshman Markell Graham (Atlanta) represented the last run, leading the ninth off with a triple before Beam drove him home with a single up the middle.

Giambalvo then slammed the door for a second time — this time in a non-save situation — allowing just one more run before the final out to clinch the series win.

ETSU opens a four game home stand on Tuesday, April 16 against Appalachian State at 6 p.m. Following that contest, the Bucs will welcome SoCon foe Wofford down to Thomas Stadium for a three-game set April 18-20.