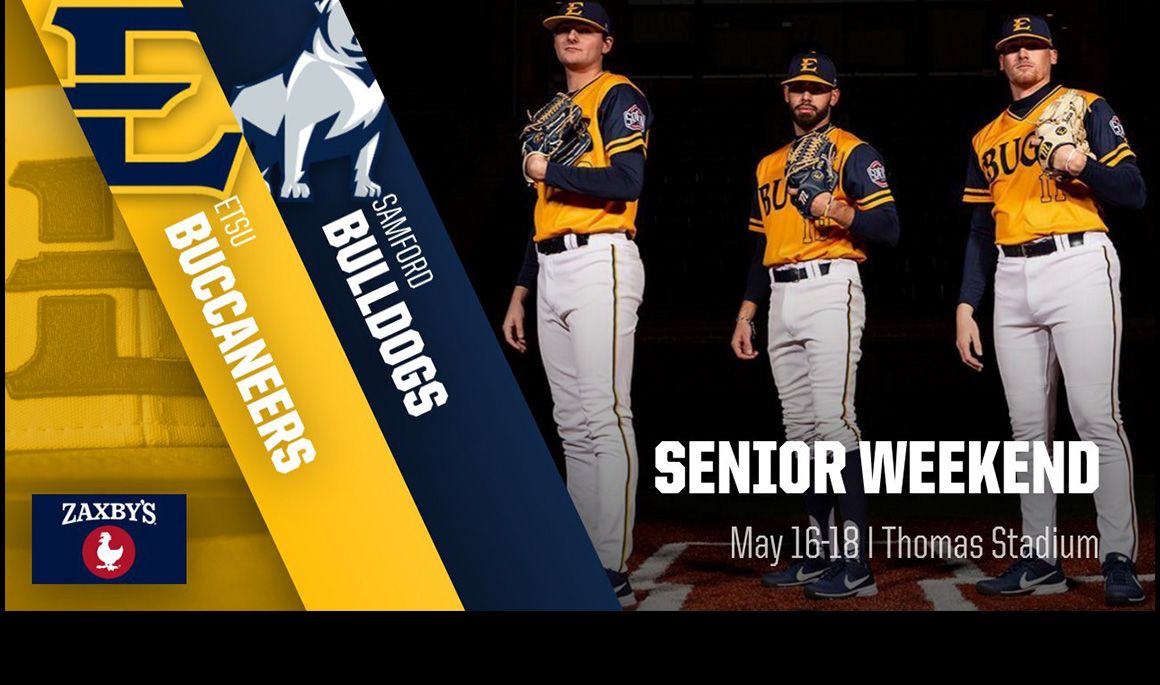 JOHNSON CITY, Tenn. (May 15, 2019) – ETSU baseball has one last roadblock before the 2019 Southern Conference tournament in South Carolina, as the Bucs welcome the 2019 regular season champions, Samford, to Johnson City for a three game set May 16-18.

All three contests will be streamed on the SoCon Digital Network with Mike Gallagher and Bruce Tranbarger calling the action. Live stats will also be available throughout the weekend.

Thursday’s game is Heroes Day, as the team will honor all veterans, active service military, police, firefighters, EMT’s and medical professionals. Anyone in those categories with a valid ID or in uniform will receive one free ticket to the game.

Saturday’s game will be a Senior Day Gold Out, as three ETSU seniors will be honored in a special pregame ceremony prior to first pitch. Fans are encouraged to wear gold ETSU apparel to the ballpark.

Zaxby’s will be this weekend’s presenting game sponsor and will have a fan interaction table set up in the concourse for Thursday’s game. Additionally, Zaxby’s will have giveaways and will be bringing their mascot.

The only other locked seed is Samford, as they have clinched the No. 1 spot regardless of this weekend. Meanwhile, ETSU will jockey with four other teams for positioning, as Mercer (13-8) travels to Furman (11-10) and UNCG (13-8) hosts Wofford (12-8).

ETSU leads the all-time series 9-6 in 15 contests, including wins in five of the last six.

The Bucs have won the last three series against the Bulldogs, sweeping Samford in 2016 and taking two of three in 2017 and 2018. The teams have only faced off once outside of SoCon play, with ETSU winning 11-6 in 2005.

ETSU has a 21-7 record at home this season, its best home start in Thomas Stadium history.

With the win at UNC Asheville on April 30, ETSU clinched their third straight winning season this year, doing so for the first time since 1981-83. Furthermore, Pennucci surpassed last season’s win total of 28 last weekend, as he now has 31 this season.

As a team, ETSU is batting .278 with 39 homers. The Bucs have been powered by their pitching this season, holding a team-ERA of 3.40 to lead the SoCon and rank 15th nationally.

ETSU has used 13 pitchers this year. Among those pitchers are weekend starters Micah Kaczor (Washington, D.C.), Landon Knack (Johnson City) and Daniel Sweeney (Johnson City) who combine for a 20-7 record and each have ERA’s that rank top 10 in the SoCon.

Kaczor is the ace of the staff, recently being named the NCBWA National Pitcher of the Week after throwing a three-hit, complete game shutout at The Citadel. He leads all starting pitchers in the conference and ranks 17th nationally with his 1.84 ERA.

Knack is among the national leaders in wins with an 8-3 record and over the last two seasons owned a 21 game win streak on the mound — 13 wins at Walters State Community College and eight straight at ETSU to open the season.

Sweeney, a redshirt senior, has locked down the Sunday role with 12 starts under his belt. The veteran from Johnson City ranks top-10 in the conference for many categories, including third in strikeout to walk ratio (5.83 — 23rd in NCAA D1).

Offensively, junior infielder Cullen Smith (Lebanon) and junior catcher Jackson Greer (Knoxville) both are batting above .300 to lead the Bucs. Conference wise, the duo ranks third and fourth in on-base percentage and combine for 27 doubles, 15 homers and 66 RBI.

The Bulldogs have been solid across the board all season with a 17-4 mark in SoCon play, batting .281 with an ERA of 3.72 that ranks second behind ETSU.

The bat of designated hitter Brooks Carlson has made the biggest difference at the plate, as he leads the SoCon with 72 hits and ranks second in average at .376. Shortstop Branden Fryman and outfielder Jordan Fucci are also batting above .300 with at least 47 starts each.

Seventeen pitchers have entered for Samford in a deep pitching staff, led by last season’s SoCon Pitcher of the Year Samuel Strickland. Zach Hester is making a strong case to challenge for this year’s honor with a 7-3 record and 2.02 ERA. Stephen Jones leads the SoCon with 13 saves, which also ranks fifth nationally.