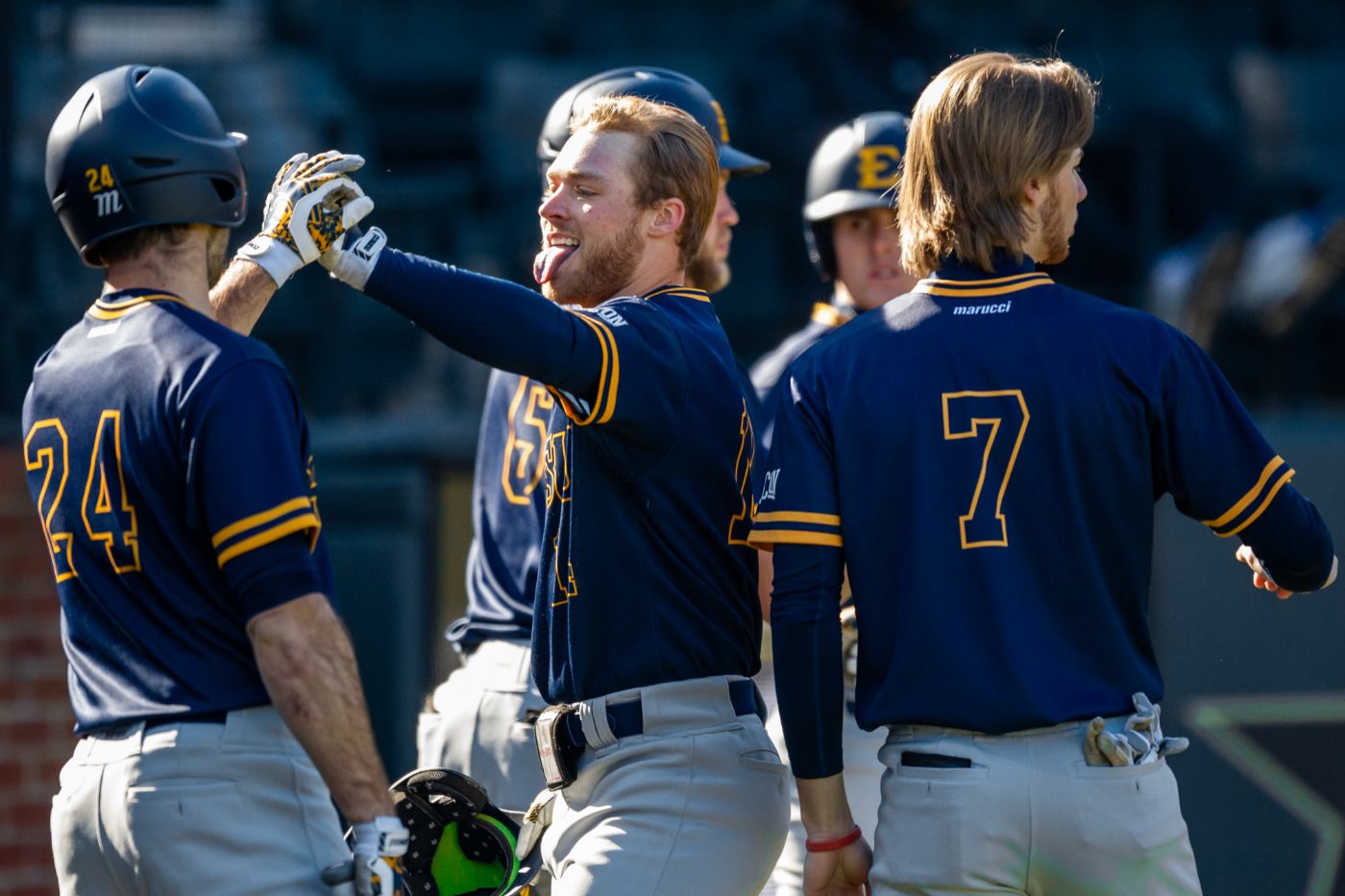 GREENVILLE, S.C. (May 24, 2019) – Trailing 5-1 in the late innings, ETSU scored six unanswered runs to shock the No. 5 Furman Paladins with a 7-5 comeback victory at Fluor Field on Friday night.

The Paladins led 5-1 heading to the final three innings, but ETSU chipped away at the deficit. Trailing 5-4 down to their final three outs, the Blue and Gold strung together three runs with help from a fielding error. Furman threatened in the ninth inning, but a running stop by Cade Gilbert (Ringgold, Ga.) at shortstop resulted in the final out and a thrilling victory for ETSU.

Freshman Nathanial Tate (Manchester) pitched 2.2 scoreless innings and picked up the win. Tate (4-0) left in the ninth inning after recording one out, as coach Joe Pennucci summoned Matthew Mercer (Chattanooga) from the bullpen.

Mercer gave up a two-out single, but came back strong to force the groundout for his third save of the season. Furman’s Rob Hughes (5-2) took the loss for Furman with three runs, two unearned, allowed.

The three run ninth inning began with ETSU down 5-4. The Bucs loaded the bases with singles from Colby Emmertz (Hampstead, N.C.) and Gilbert before Markell Graham (Atlanta, Ga.) was hit by a pitch.

Junior Cullen Smith (Lebanon) put the ball in play with one out, rolling a grounder under the legs of the first baseman to bring home the tying and go-ahead runs for ETSU. The seventh run came across on a fielder’s choice, as Furman failed to turn a double play to end the frame.

Six Bucs had hits in the contest, led by a returning Gilbert with two on the day. Smith batted in two runs and scored one of his own from the top of the order to help production. Noah Hill (Ringgold, Ga.) and Ethan Shelton (Lebanon) each doubled in the game.

Furman’s damage came early with two unearned runs in the opening frame. Following a throwing error that allowed the leadoff man to reach, Furman struck with an RBI double and a two out RBI single. They later added one more in the third inning with a sac fly.

ETSU then got on the board in the sixth inning following its first hit of the game off the bat of Gilbert — his 100th career hit. Gilbert then moved to third on a sacrifice bunt by Graham before Smith hit a sac fly to bring him home.

Upon starter Daniel Sweeney (Johnson City) exiting after 5.0 innings, Furman went on to add two runs with a two out RBI double placed down the left field line. The 5-1 lead did not discourage the Bucs, as the six-run comeback was on.

Shelton came through with a deep shot that hit high off the Green Monster, driving in a run with his double. With runners on second and third, Emmertz made it home on a wild pitch to make it 5-3.

ETSU made it three unanswered runs in the eighth, adding a run off a Furman balk with Smith on third. This set up a tense situation for the ninth inning with two team’s seasons on the line, as ETSU took the lead and capped the victory.