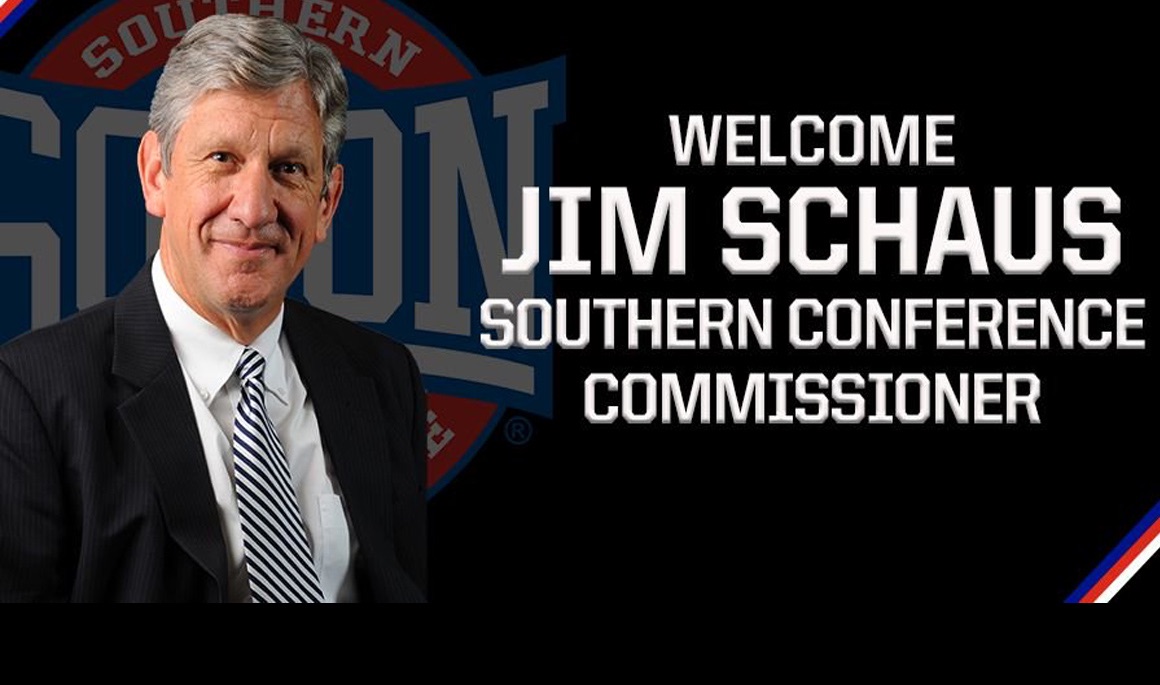 Schaus will be the ninth commissioner in league history and succeeds John Iamarino, who announced his retirement in March following a 13-year career at the helm of the league office.

“It is truly an honor to serve as the ninth commissioner in the storied history of the Southern Conference,” Schaus said. “I believe that my varied career experiences in college athletics will assist me in this important leadership role for outstanding member institutions. I look forward to working with the staff and conference membership to build upon past successes in the quest to be the premier mid-major conference in the country. It will be a priority to be successful athletically, academically and support the personal well-being of our student-athletes. I can’t wait to get started!”

Schaus comes to the SoCon after an 11-year run as the director of athletics at Ohio University, where he led the Bobcats to unprecedented levels of success in athletics and academics.

Under Schaus’ leadership, Ohio University’s football program has been bowl eligible in all 11 years, the most in the Mid-American Conference, and participated in 10 bowls in that time, including a 27-0 win over San Diego in the 2018 DXL Frisco Bowl for its second straight bowl win. The Bobcats’ men’s basketball team earned three NCAA tournament wins in the last decade, making a run to the Sweet Sixteen in 2012.

Ohio University’s women’s basketball team has won three MAC East Division titles in the last five seasons, making an NCAA appearance and a pair of WNIT appearances, and became the first Bobcat basketball team, men or women, to reach 30 wins in a season with a 30-6 mark in 2018-19.

The Bobcats’ volleyball team has won seven MAC Championships and appeared in five NCAA Regionals during Schaus’ tenure, while the baseball and softball teams have earned two MAC titles apiece.

In the classroom, Ohio University boasts an impressive graduation rate of 88 percent, and the athletic department’s federal graduation rate regularly exceeds that of the general student population. Bobcat student-athletes have posted a cumulative grade point average of at least 3.1 in all 11 years of Schaus’ tenure, while Ohio University has posted a department-record APR score of 990 for 2017. Twelve of the department’s 16 sports turned in perfect single-year APR scores of 1,000.

When Schaus came to Ohio University, he inherited a department with a $2.3 million budget shortfall, but he has delivered a balanced budget in each of the last 11 years. The Bobcats have set department revenue records in ticket sales, fundraising, corporate sponsorship licensing and concession sales under his leadership.

Prior to his tenure at Ohio University, Schaus served as the athletic director at Wichita State from 1999-2008, where he was named the Division I Central Region AstroTurf AD of the Year in 2007.

With more than 30 years of experience in athletics administration, Schaus has also had stops at Oregon, Cincinnati, Texas-El Paso and Northern Illinois. He also has experience in the NFL, having worked as an intern for the New England Patriots and as the director of marketing for the Washington Redskins, and served as a publicity assistant for the LPGA Tour.

Schaus takes the reigns at the SoCon after a successful and memorable year for the league that was highlighted by five different league football teams appearing in the national rankings at some point in the season and Samford’s Devlin Hodges winning the Walter Payton Award as the FCS Offensive Player of the Year; Furman and Wofford earning national rankings in men’s basketball to give the league multiple ranked teams in a season for the first time since 1959-60; former Wofford men’s basketball coach Mike Young being named the Sporting News Coach of the Year before departing to lead the Virginia Tech program; two men’s lacrosse teams finishing in the national rankings for the first time in the league’s history; Furman’s Aaron Templeton finishing fifth at the NCAA Cross Country Championships; Samford’s Karisa Nelson finishing second in the mile at the NCAA Indoor Track & Field Championships; seven SoCon student-athletes qualifying in nine events for the NCAA Division I Outdoor Track & Field Championships; Georgia Southern’s Rosemary Kramer becoming the first rifle student-athlete to qualify for the NCAA Rifle Championship since the league revived the sport in 2016-17, setting an NCAA Championship record with a score of 599 in the preliminaries and finishing third overall to earn All-America status; three SoCon women’s golfers participating in the inaugural Augusta National Women's Amateur; nine league sports meeting or exceeding the national average in the Academic Progress Rate; and 22 league teams earning NCAA APR Public Recognition Awards.

“We are excited by the leadership that Jim will bring to the Southern Conference,” said East Tennessee State University President Dr. Brian Noland, who chaired the search committee. “He is among the most well-respected athletic directors in the nation, and he brings a vision and a wealth of experience that will be highly valuable to the league.”

Schaus has a familial connection to the Southern Conference, as his father, former Los Angeles Lakers coach Fred Schaus, was the men’s basketball coach at West Virginia from 1954-60, earning SoCon Coach of the Year honors four times in that six-year span and still ranking in the top 20 in career wins by a league coach.

Jim Schaus earned his bachelor’s degree from Purdue in 1983 and a master’s in athletics administration from West Virginia University, where he has been honored as a distinguished alumnus.

Schaus and his wife, Priscilla, have three grown children: Kevin, Diane and Laura.