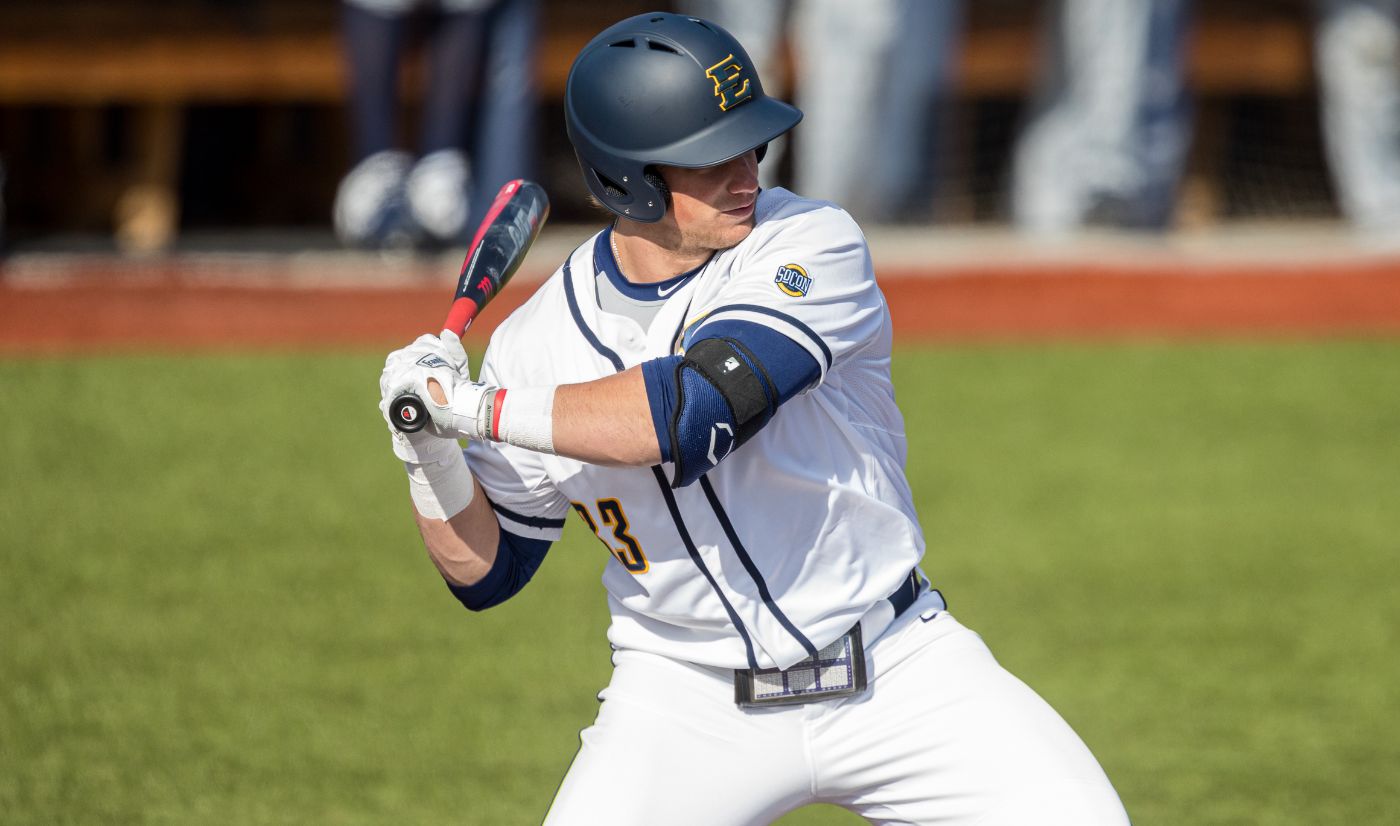 JOHNSON CITY, Tenn. (Feb. 15, 2020) — After a 6-2 Opening Day win yesterday, ETSU’s offense exploded in their second game of the year producing 15 runs in a 15-1 victory over Toledo. The Bucs logged seven walks and 12 hits, nine of which were extra-base knocks.

The two teams entered the third inning hitless, but that ended quickly as the Rockets entered the hit column in the top half and the Bucs blew up the scoreboard in the bottom of the inning. The Bucs capitalized on a leadoff double off the bat of Ethan Shelton (Lebanon, Tenn.) which set the Blue and Gold up for the big inning. Reese Farmer (Winterville, N.C.) put down a bunt down the third base line to move Shelton to third which set up the first run for the Bucs from a Noah Hill (Ringgold, Ga.) sacrifice fly.

After a Jackson Greer (Knoxville, Tenn.) bases-loaded walk, Jake Madole (Hampstead, N.C.) delivered with a bases clearing double off the left field wall to give the Bucs a 5-0 lead. After hitting around in the third, all nine Bucs came to the plate in the fourth to double their lead with a two-run home run from Hill, a wild pitch, an RBI double off the bat of Madole and a two-run single courtesy of Cade Gilbert (Ringgold, Ga.).

The offensive eruption continued in the 7th as the Bucs lit up for four more runs with a Jake Lyle (Spring Hill,
Tenn.) two-run double and a two-run blast off the bat of Greer to put the Bucs up 14-1. Farmer drove in the 15th run of the night for the Blue and Gold with a sacrifice fly to score Gilbert in the eighth.

Zach Kirby (Upland, Calif.) got the second start of his career and allowed just one run on six hits with six strikeouts in five innings of work to pick up the second win of his career. In relief, Joseph Acosta (Vineland, N.J.), Matthew Bollenbacher (Powder Springs, Ga.), and Brandon Nikitaides (Marietta, Ga.) combined for five K’s, two hits and no runs over four innings on the mound.

Stat of the game
The 14-run margin of victory is the largest for the Bucs in an opening series since 1990 when the Bucs defeated Bluefield State 24-2 to open up the season.

Notables
» 15 runs are the most for the Bucs since ETSU took down Furman 15-2 on May 11, 2018.
» ETSU’s nine extra-base hits are the most for the team since the same victory over the Paladins.
» Madole’s three doubles in a game are the most by a Buc since Chris Cook had three at Western Carolina on April 28, 2018. Four is the program record. His three doubles is a career high, he previously logged two in a game twice at UNC Asheville.
» Madole, Gilbert and Greer all logged 2+ hits while eight of the nine starters for the Bucs recorded a hit. All nine reached base.
» The Bucs have combined for 14 walks over the course of the first two games (seven each).
» Through two games the Bucs have combined for nine stolen bases with five today. Lyle leads the squad with four.
» Gilbert has now logged multiple RBI’s in both games this season.
» The Bucs’ five stolen bases are tied for the most the team had in a game last season (done twice vs Iona).

Up next
The Blue and Gold finish the opening series of 2020 with a 1 p.m. first pitch against the Rockets tomorrow.