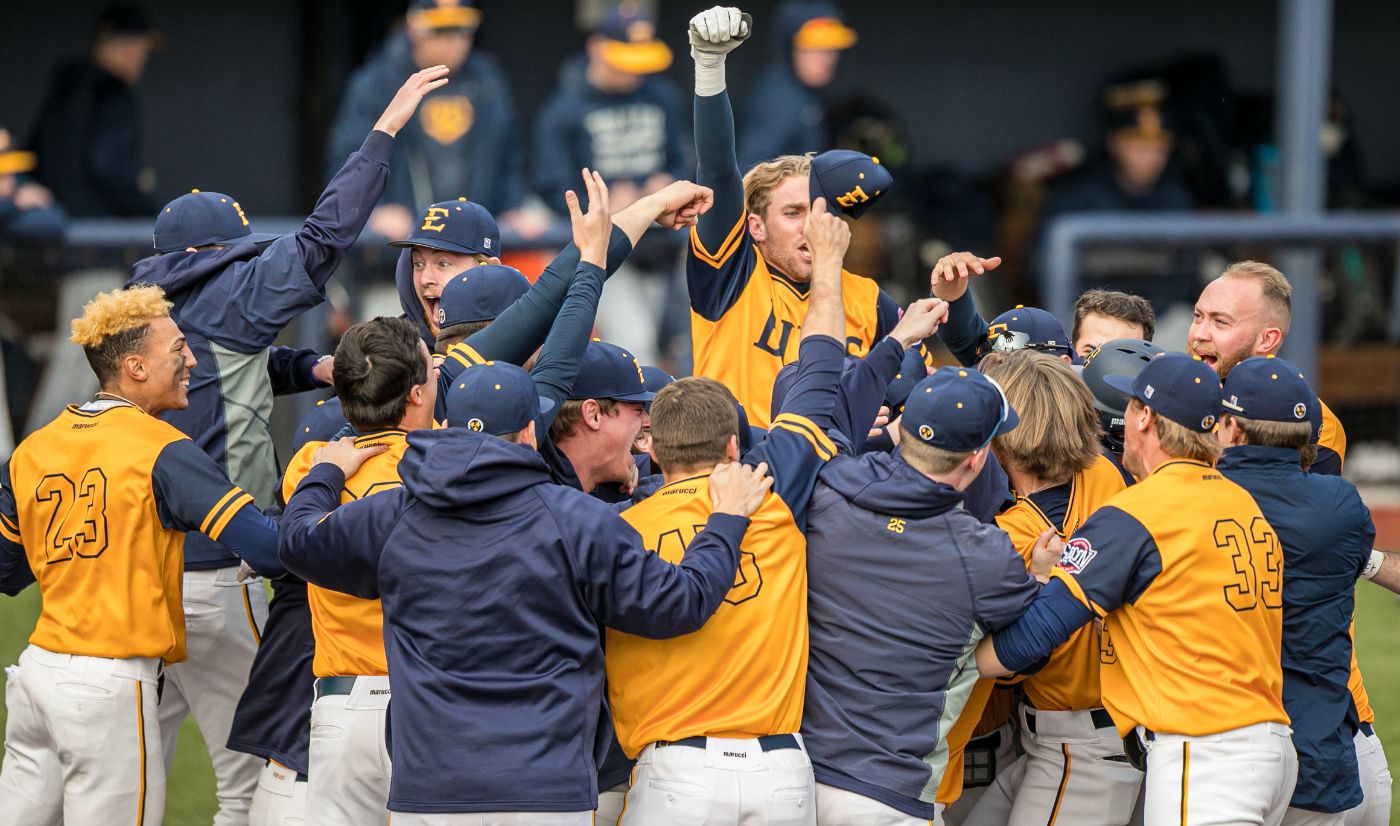 JOHNSON CITY, Tenn. (Feb. 16, 2020) — With a five-run ninth inning, the ETSU baseball team gave fans a Sunday to remember taking down the Toledo Rockets 9-7 in heroic fashion. Kyle Richardson’s (Zionsville, Ind.) second homerun as a Buc sent the fans home happy with a three-run walk-off blast over the left field wall to give ETSU the win.

The first inning of today’s game featured more offense than the two teams saw in the first two games of the series. Toledo got on the board first in the top half with one run, but the Rockets’ lead did not last long. Noah Hill (Ringgold, Ga.) started the Bucs’ offense with a leadoff double off the left field wall and the Bucs gained momentum. After a strikeout, Jackson Greer (Knoxville, Tenn) and Jake Madole (Hampstead, N.C.) exchanged back-to-back doubles down the left field line to give the Bucs the lead. ETSU wasn’t done as Ben Jackson (Guyton, Ga.) came to the dish and delivered his first hit of the season, a two-run blast to left to put the Bucs up 4-1.

The Rockets used the third and fourth inning to get back into the ballgame as they tied the contest at four with a few RBI-singles to drive in three.

The Rockets found run support once again in the seventh, capitalizing on a Buccaneer error allowing the leadoff man to reach base who came around to score. In the bottom half, the Bucs had an opportunity after an infield single, but stranded two runners.

The ninth inning was one to remember for the fans at Thomas Stadium as Toledo added two in the top half to add to their lead, making it 7-4. In the bottom half, Jake Lyle (Spring Hill, Tenn.) and Greer began the stretch with back-to-back singles to start the rally. After a strikeout and a Cade Gilbert (Ringgold, Ga.) walk to set up a bases-loaded opportunity, the Bucs began to inch back. Jackson came up to the plate and delivered a single to center to score Lyle and Markell Graham (Atlanta, Ga.), who pinch-ran for Greer.

With two on and one out, Richardson blasted a first-pitch fastball to deep left center to close out the victory for the Bucs, plating Jackson and Gilbert.

Stat of the game
This is the Bucs’ first walk-off homerun since Feb. 22, 2017 when Blake Rowlett delivered a blast to send the Bucs home with a 9-7 win over Oakland.

Notables
» Richardson finished 2-for-3 on the day with three RBI after earning his first start of the season.
» After going hitless in his first two games, Jackson went 3-for-4 at the dish with four RBIs and two runs scored. He also tallied his first stolen base of the season. His four RBIs are a new career-high.
» The top three hitters for the Bucs, Hill, Lyle and Greer combined for five hits and three runs.
» This is the second walk-off win for the Bucs in two years, the last came on March 29, 2019 against UNC Asheville in 12 innings.
» In the series, the Bucs were given 26 free passes, 15 walks and were hit by a pitch 11 times. Greer leads the squad with six free passes.
» This is the first series sweep for the Bucs at home since March 22-24 when the Blue and Gold swept Western Carolina.
» Three of the four Bucs on the mound today saw action for the first time in Blue and Gold.
» The Bucs entered the game a combined 2-39 when trailing after eight innings under Pennucci.

Up next
The Blue and Gold head north to Blacksburg, Va. on Tuesday for their first road contest as the Bucs face Virginia Tech at 4 p.m.