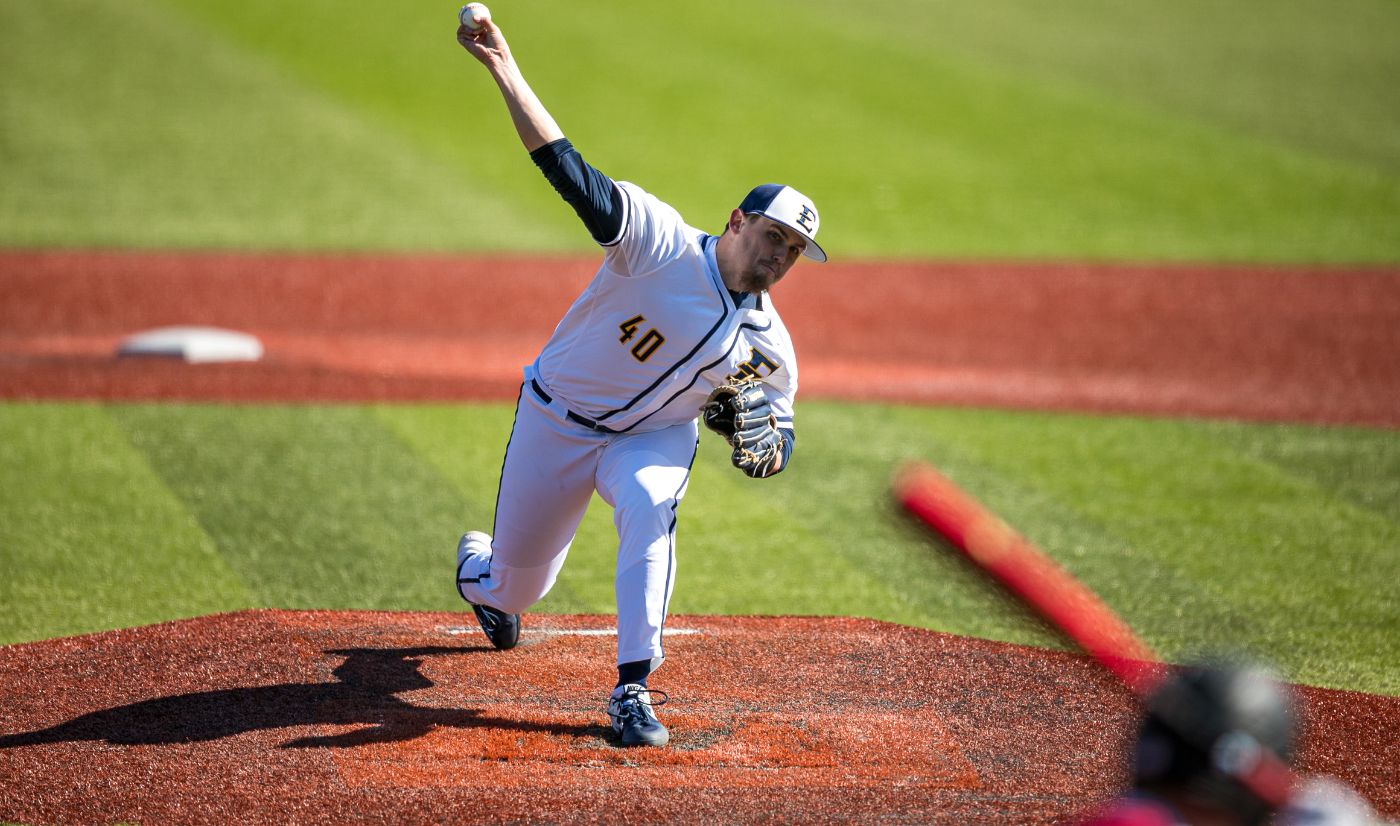 JOHNSON CITY, Tenn. (Feb. 21, 2020) — After an 11-strikeout outing to start the season, Landon Knack (Johnson City, Tenn.) was back on the mound today and dominated once again. In the ETSU baseball team’s Friday afternoon 7-0 victory over the Rider Broncs, Knack took a perfect game into the seventh inning and delivered a career-best 12 strikeouts, one hit and allowed no runs in seven innings of work.

Both offenses struggled through the first three innings with the Bucs knocking the only hit of the contest, a Reese Farmer (Wintersville, N.C.) leadoff double. After threatening in the fourth with a runner in scoring position, the Bucs’ offense lit up in the fifth.

ETSU plated four runs in the inning after having the bases loaded with no outs. The production began with a Ben Jackson (Guyton, Ga.) single to left center which scored Noah Hill (Ringgold, Ga.) and Jake Lyle (Spring Hill, Tenn.). After a Cade Gilbert (Ringgold, Ga.) sacrifice fly, Drew Haynie (Brentwood, Tenn.) singled to right to plate to Jackson for ETSU’s fourth run of the frame.

After batting around in the fifth, the offense continued in the sixth as they scored two runs with two outs in the inning. After stealing his team-leading fifth base of the season, Lyle was in scoring position to set up an RBI opportunity for Greer. Greer came through singling up the middle and later scored on a Gilbert RBI-single to cap off the two-run sixth.

Entering the inning setting down the first 18 hitters he faced, Knack came back on the mound in the seventh and struck out the first Rider batter of the frame. The next batter grounded back to Knack as he set down his 20th straight hitter to start the game, a career high. Rider’s next batter, Sebastian Williamson, skyrocketed the 1-1 pitch straight up and landed an infield single a few feet in front of the plate to end Knack’s perfect outing.

Knack pitched through the seventh then the Bucs brought in Daulton Montagna (Pennsville, N.J.) and Matthew Bollenbacher (Powder Springs, Ga.) out of the bullpen. They both delivered a scoreless inning of relief allowing one hit and striking out one Bronc apiece.

Stat of the game
Knack’s one-hit outing in the best of his career and retiring the first 20 batters he faced is also a career high for the senior. Last season against The Citadel, he set down the first 14 batters he faced.

Notables
» Knack has been nearly unhittable in his two outings this season. In 12 innings on the mound, he has allowed three hits, one walk, no runs and has struck out 23 batters.
» Lyle, Greer and Haynie all logged two hits in the contest. Greer, Jackson and Gilbert all tallied two RBIs.
» Lyle has logged 2+ stolen bases in two games this season and six altogether. Last season, he totaled nine through 55 games.
» This is the first shutout at Thomas Stadium for the Bucs since they blanked Appalachian State, 4-0 on April 16, 2019.
» Three hits allowed by the pitching staff marks a season-low for the Blue and Gold, a mark held just three times last season.
» Jackson, Lyle and Hill have reached base in all of ETSU’s games this season. Lyle is the lone Buc with a hit in all five contests.

Up next
The Blue and Gold continue their three-game series with Rider tomorrow afternoon at Thomas Stadium. First pitch is slated for 2 p.m.