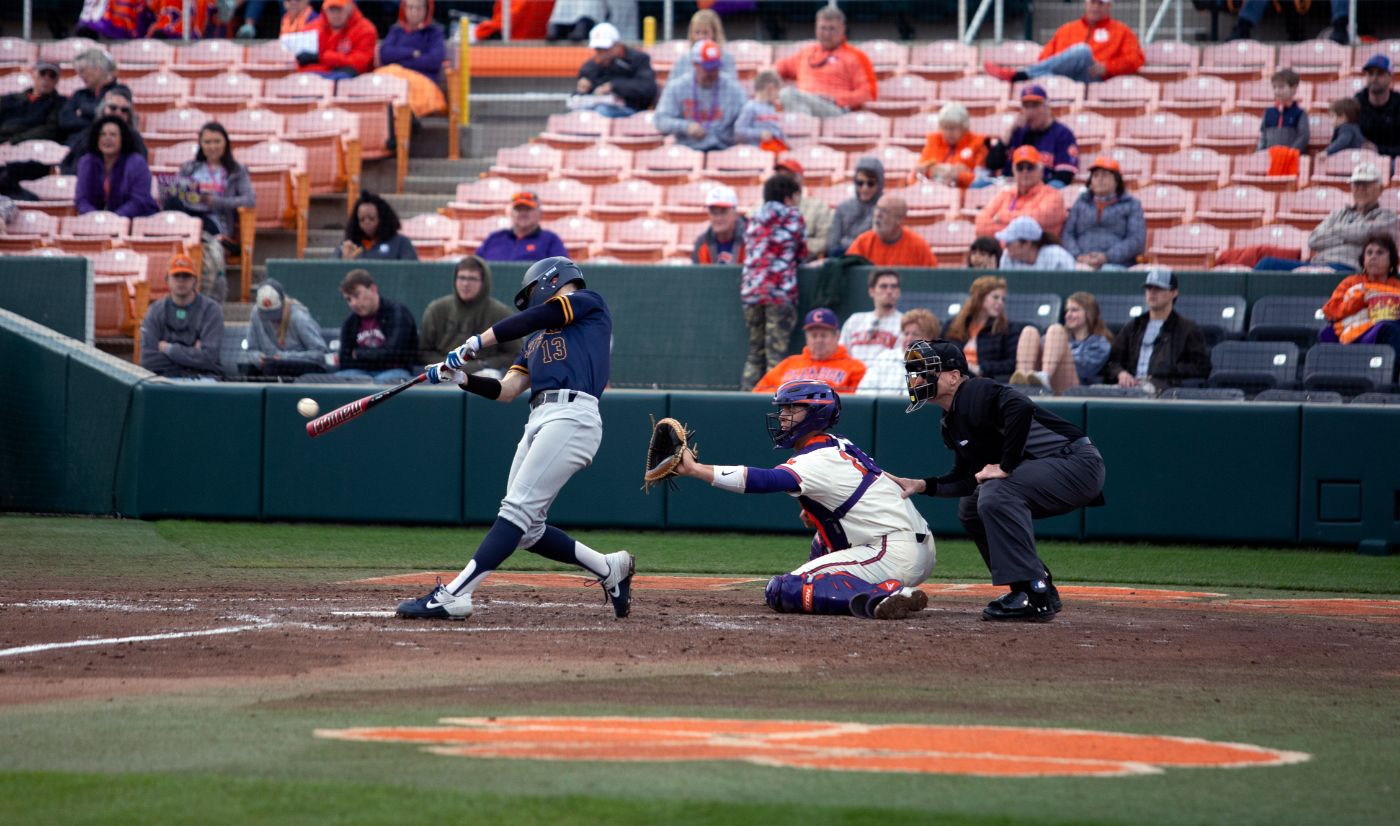 CLEMSON, S.C. (Feb. 25, 2020) — The ETSU baseball team had not defeated the Clemson Tigers since 1985 coming into this season. The Bucs changed that on Tuesday evening as ETSU handed Clemson its first loss of the season in the Bucs’ 5-3 win in South Carolina.

The Bucs struck first with an RBI-single off the bat of Ben Jackson (Guyton, Ga.), scoring Noah Hill (Ringgold, Ga.) in the top of the first. The run production continued in the second as the Bucs added another with an RBI infield single from Jake Lyle (Spring Hill, Tenn.)

Clemson got on the board in the third inning with a two-run double with the bases loaded and one out to tie the game. It took just two innings for ETSU to regain the lead in the fifth as David Beam (Knoxville, Tenn.) came through with a double down the left field line which scored Cade Gilbert (Ringgold, Ga.) from first.

In the seventh, the Bucs threatened with the bases loaded and were able to get one run across as Lyle walked with two outs on four pitches. In the bottom half, the Tigers got the run back on an RBI-single. As they tried to get the tying run in scoring position, Jackson Greer (Knoxville, Tenn.) delivered a bullet to second base to catch the runner stealing on a bang-bang play.

The Bucs secured their fifth run on an 0-2 pitch in the top of the eighth, when Markell Graham (Atlanta, Ga.) recorded his first hit of the season, an RBI single down the third base line, scoring Jackson.

Nathanial Tate (Manchester, Tenn.) came in relief in the eighth and delivered a six-out save. The Tigers had the tying run on second with two outs in the final frame and a 3-2 curveball from Tate was driven to center as Jackson secured the final out of the contest.

Stat of the game
Coming into the game, Clemson had an 11-game win streak against the Bucs dating back to 1985. ETSU secured their first win over Clemson in 35 years and just fifth overall in Clemson.

Notables
» In his first start as a Buc, Tucker Rogers (Raleigh, N.C.) tossed five innings and allowed two runs and six hits with three strikeouts and no walks.
» The five runs and 14 hits that the Bucs scored are the most allowed by Tiger pitching this season.
» For the second consecutive game, all nine Bucs in the starting lineup reached base.
» This is the first win over an ACC team for ETSU’s baseball team since Feb. 22, 2015 when the Bucs took down Pittsburgh 10-4 in South Carolina, a neutral site contest. It is the first win over an ACC team on the road since May 17, 2011 at Georgia Tech.
» Lyle extended his hitting streak to eight games which began at the start of the season. Hill and Jackson joined him in becoming the only three Bucs who have reached base in all eight games in 2020.
» Lyle stole two bases in the contest which gives him eight this season. The Bucs are now 6-0 when they steal a base.
» Jackson, Lyle, Hill and Gilbert all recorded two hits on the night.
» ETSU’s eight walks tie the most for the Bucs this season, set last weekend against Rider.
» The Bucs’ 39 at bats is also a season best for the Blue and Gold.
» This marks the first win over an ACC opponent for head coach Joe Pennucci. With the win, he has defeated a team from every conference he has coached against at the helm of ETSU baseball.

Head coach Joe Pennucci:
“It was a fantastic team win! Tucker Rogers gave us five quality innings and Joe Acosta and Nathanial Tate combined for an awesome overall pitching performance.  We scored in the first inning and our offense put pressure on them all night with quality at bats and some big hits. I am proud of the way we competed, communicated and stayed together!”

Starting pitcher Tucker Rogers:
“It feels great to have my first Division I win tonight and it’s even more incredible having it be at Clemson. Our offense did their part in putting up runs and keeping pressure on them and our pitching continued the pressure. It was a big collaborative effort by the squad, a great team win.”

Up next
The Blue and Gold are back at Thomas Stadium this weekend as they host Georgia State. First pitch on Friday is slated for 4 p.m.