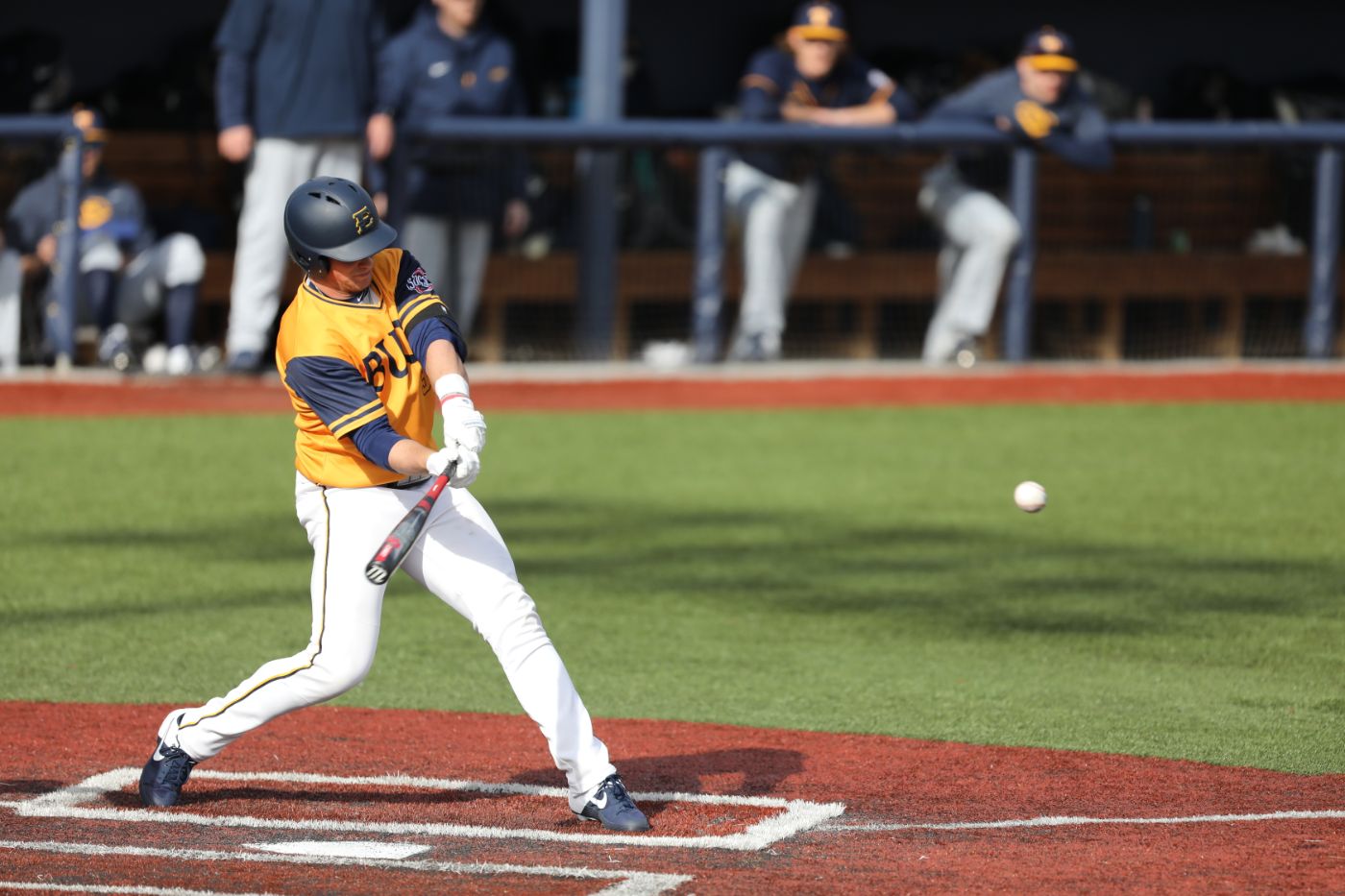 JOHNSON CITY, Tenn. (Feb. 29, 2020) — The ETSU baseball team saw their second deficit of the season early at Thomas Stadium, but a four-run fifth inning by the Bucs was enough to push the Blue and Gold passed the Georgia State Panthers on Saturday afternoon. After putting up five more in the later innings, ETSU defeated the Panthers 9-3 in the series opener.

After a scoreless first inning, the Panthers got on the board in the second as Landon Knack (Johnson City, Tenn.) gave up his first earned run this season, a solo homerun down the left field line. The Panthers had power early as they tacked on another run in the fourth with another solo shot to left to take a 2-0 lead.
The Bucs got their first tally in the fifth with an RBI double from David Beam (Knoxville, Tenn.) as Cade Gilbert (Ringgold, Ga.) came all the way around to score from first to cut the Panthers’ lead in half. With two on and one out, Jake Madole (Hapstead, N.C.) delivered for ETSU as he launched a homer to the parking lot in left field to give the Bucs their first lead of the afternoon.

The Panthers got one run back in the sixth as freshman shortstop Will Mize delivered an RBI double down the left field line, scoring his teammate from first.

ETSU added three more in the seventh as the Bucs capitalized on a plethora of defensive miscues by the Panthers. Reese Farmer (Winterville, N.C) scored from second on an infield error by the GSU second baseman. Following the play, the Panthers’ pitcher balked, allowing the ETSU’s runners to both get into scoring position. After another balk on the next pitch, the Bucs took a 6-3 lead. As Jackson Greer (Knoxville, Tenn.) continued his at bat with a 1-2 count, a passed ball allowed Hill to score on GSU’s third miscue of the inning.

In his second career plate appearance, JL Bland (Memphis, Tenn.) delivered two more runs for the Blue and Gold with a 2-RBI double down the left field line in the eighth.

Stat of the game
With a multiple stolen bases in the 8th inning, the Bucs have stolen a base in seven games this season. They are 7-0 in those contests.

Notables
» Ben Jackson (Guyton, Ga.), Noah Hill (Ringgold, Ga.) and Jake Lyle (Spring Hill, Tenn.) all extended their on-base streak to nine consecutive games. Lyle’s team-high eight-game hit streak came to an end.
» Bland’s 2-RBI double was his first career hit as a Buccaneer.
» ETSU has won three series openers to begin the season for the second consecutive season.
» This is the third loss of the season for Georgia State when scoring three runs or more.
» Knack continued to be dominant on the mound with his second quality start of the season. The senior went seven innings and struck out 12 for the second straight weekend. He allowed his first earned runs of the season and allowed four hits and no walks.
» Coming into the season, Knack’s career high was 11. Last season, Knack had double-digit strikeouts just once, a mark he has now met in all three starts this season.
» Nathanial Tate (Manchester, Tenn.) came in relief and delivered two shutout innings, striking out two and allowing one hit and a walk.
» ETSU improves to 6-1 at Thomas this season.

Up next
The Blue and Gold are back at Thomas Stadium as they play their first doubleheader of the season tomorrow. First pitch of game one is slated for noon.